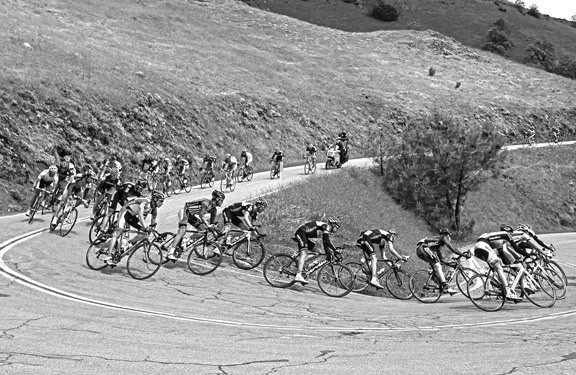 Then the descent comes

Following the rest day, descending was again a major factor in the results of Stage 17. This time it was the final descent before a short but tough finishing climb to Pra-Loup. The descent of the Col d’Allos is notoriously treacherous. The road surface is OK but not great, the road is characteristically narrow, and it features a lot of reducing-radius turns (when a turn gets tighter as you go through it). If this descent was in the beginning or middle of a stage riders would give each other some space and cruise down. But with a 6.2km climb to a summit finish starting right at the bottom of the descent, everyone in the breakaway group and the yellow jersey group was racing hard down the mountain.

1. Think and look far ahead

Traveling at 62mph (Mark Cavendish reached 101kph on the descent of the Col du Tourmalet), you cover approximately the length of a football field (300 feet) every 3.3 seconds. With corners, rocks, potholes, etc. coming at you that quickly, you have to pick your lines early. Ideally you want to set up wide as you enter a corner, cut through the apex, and exit wide. Choosing the wrong line on the entry makes it difficult – and sometimes impossible – to safely exit the turn and stay on the road.

2. Brake late, but before the corners

You want to make dramatic changes in speed on the straightaway before you enter a corner, using both brakes so you are complete control of your speed. You may still be on the brakes in the turn, but if you were going 40mph in the previous straightaway, you want to bring the speed down to a safe speed for the corner – say 25-30mph – before the turn rather than trying to dramatically slow down and change direction at the same time.

If you go into a corner too hot and grab a fistful of brakes, you’ll either lock up the wheels and slide or crash; or your momentum will carry you so far to the outside of the turn that you’ll miss the exit and end up in the trees. The more advanced way to do this is to brake late; that is, hold your speed until you’re closer to the corner and use more braking power to slow down quickly. The trouble is, if you get it wrong you’ll end up like Roman Barguil on Stage 16 when he overshot a corner and shoulder-checked Geraint Thomas into a telephone pole.

3. Look through the corner

Your bike goes where your eyes are pointed, so look through to the exit of the corner. Don’t focus on the potholes or the guardrail at the edge of the road unless that’s where you want your wheels to go.

4. Plant your weight on your outside foot

To corner safely, you need your center of gravity to remain over your tires and your weight distributed appropriately across both wheels. With your body weight planted on the pedal facing the outside of the corner, you’re increasing the traction your tires have on the road. You can’t be tentative about this; press your weight onto the outside foot.

5. Lean your bike more than your body

This is relative. When you ride into a corner, both your body and bike lean to the inside of the turn, but you should lean the bike more than you lean your body. To do this, plant your weight on your outside leg and extend the arm facing the inside of the corner. As you extend your inside arm, you’ll notice the bike drops into the corner and your body weight feels like it is primarily directed through your outside leg and your inside arm. This is a very stable position and it provides a lot of traction; you just have to remember to be agile on the saddle so you can move and position the bike underneath you.

These are the tricky bends. The hardest part about a reducing-radius turn is that you often don’t know about it until you’re in it. At that point you have to be able to adjust your line through the turn because your original line will take you too wide. To tighten your line, focus more force on your inside arm to push it into the inside of the turn. With your weight pressed on your outside leg, pushing with the inside arm will cause the bike to lean more into the turn while keeping your center of mass near the wheels to maintain traction.