Skills Cyclists Use to Save Energy While Riding

Save it for when you need it 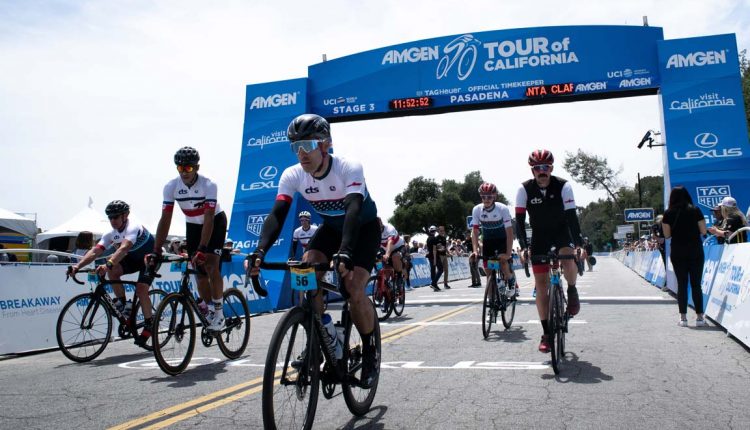 Economy is the most important lesson young pro cyclists learn in their first year – if they’re going to have a second year. It’s not enough to be powerful; you also have to be as frugal as possible with your energy. This was the message I drove home to the 22 athletes and my team of coaches before we endeavored to ride the hardest Amgen Tour of California route yet. Here are some of the skills and techniques you can use to be more economical with how and where you expend energy on the bike.

The 2019 ATOC route was nearly 800 miles over seven days. The stages were longer than during previous editions of the race, and most important to a group of amateurs – there was no mid-week time trial! That TT is crucial for the racers, but for us it’s a shorter day that helps provide more recovery time. Without that break it was even more important to think big and act small. You start any event – whether it’s a day, a week, or a three-week Grand Tour – with a full bucket of energy. Every effort you make tips some energy out of the bucket, and even with recovery every effort is a net drain on your energy. When I say “think big” I mean you have to keep the whole event in mind when you make decisions in the very first hour, and every hour after that. “Act small” means make the smallest efforts you can to get the job done. Dole out your efforts with Ebenezer Scrooge’s stinginess.

Idiots ride in the wind

There’s a time and place to put your nose in the wind, and that’s when you’re taking your pull in the group or trying to move to a place where you can get on a wheel. Our group was riding 2×2 or rotating pace lines, and we made a point of keeping the group tight. Sitting out in the wind instead of right behind the wheel in front of you is a fool’s move. You’re just catching more wind and burning more energy.

Just as important, you have to pay attention to wind direction and adjust your drafting position accordingly. Even better is to anticipate changes as you turn from one direction to another so you’re in the right spot after the turn.

Bill Walton is 6-foot-10, in the Basketball Hall of Fame, and one of most genuinely happy and grateful souls I’ve ever met. On the bike, though, he catches a lot of wind. On the other hand, he has plenty of mass to help him go downhill.

Bill has become an expert in the conservation of momentum. He doesn’t take huge risks going downhill but he also doesn’t overuse his brakes, especially when there’s an uphill coming. He carries as much momentum as he can into the hill or into a turn on the flats.

Use your brakes when you need to – of course – but stay off them as much as you can during pace lines, urban and suburban riding, and cornering.

Don’t be a One-Hour Hero

On hour one of day one, everyone feels like a million bucks. Your excited about the ride ahead, well rested, tapered and fed. The dumbest thing people do is go out too hard. Dial it back until the pace seems almost pedestrian. You’ll be rewarded in hour 5 when you still have some gas in the tank and everyone else is gassed.

Bike racers can’t always dial it back early on. However, even in the pros, they’ll go hard for as long as it takes to establish a breakaway of the right size and with the right composition of riders. And then peloton backs off so they have energy for the fireworks at the end of the stage.

The length of the day or the stage matters, too. Remember how hard the racing was when the Tour de France featured some short mountain stages? That’s because riders could expend all their energy for the day in less time. When they start a 6+ hour stage, they spend more time riding at a moderate pace.

“Dig deep” is a well-worn phrase in endurance sports, and there are absolutely times when you have to dig as deep as you can to get through a challenge. You also have to know when to stop digging. Do the work you need to do, and no more. Don’t spend time pulling at the front of the group when others are willing to rotate. And if they’re not eager to pull, peel off and make them do it. You have a draft to find so you can conserve energy.

Summit finishes are a great example of this. When it’s a race or you have a personal record you’re going for, then dig in and go. But if not, do what you need to do to stay in the group (because it’s economical to be in the group) until the final climb and then let go.

Climb to the summit at a steady pace that gets you to the top in a reasonable time, because dawdling just means you’re out there longer sweating and missing out on recovery time. But don’t dig deep to go five minutes faster on a 45-minute climb if you have four days of long rides still to do.

Eat and drink with purpose

I’ve written about eating and drinking for multi-day events, so I will be brief here. When you fail to eat and drink enough, you suffer more on the bike. You go slower. You lose focus and make mistakes that waste energy. You’re out in the elements longer, and it takes more time to recover for the next day. Remember to eat and drink – at breakfast, early on the bike, in the last hour on the bike, after the ride… Have each other’s backs

Everyone on Team CTS during the ATOC Race Experience experienced a rough spot (or several). It happens to riders at all levels of the sport. It was up to the team to help someone who was struggling work through that period, because at some point everyone else on the team would be in that position and need help. Don’t let your ego prevent well-meaning people from helping you, and don’t be shy about asking for help.

At the ATOC Race Experience we share team meals with the pros and team management, so you’re sometimes in the buffet line at dinner with that day’s stage winner. Every year it is nice to hear from current pros and colleagues in cycling who appreciate what it takes for this relatively small peloton of amateurs to cover the same course they do for the whole week. I’m proud to say we get everyone from start to finish, and we do it by guiding athletes to be as smart and economical as possible with their energy.

7 BEST TIPS TO MASTER A PACELINE