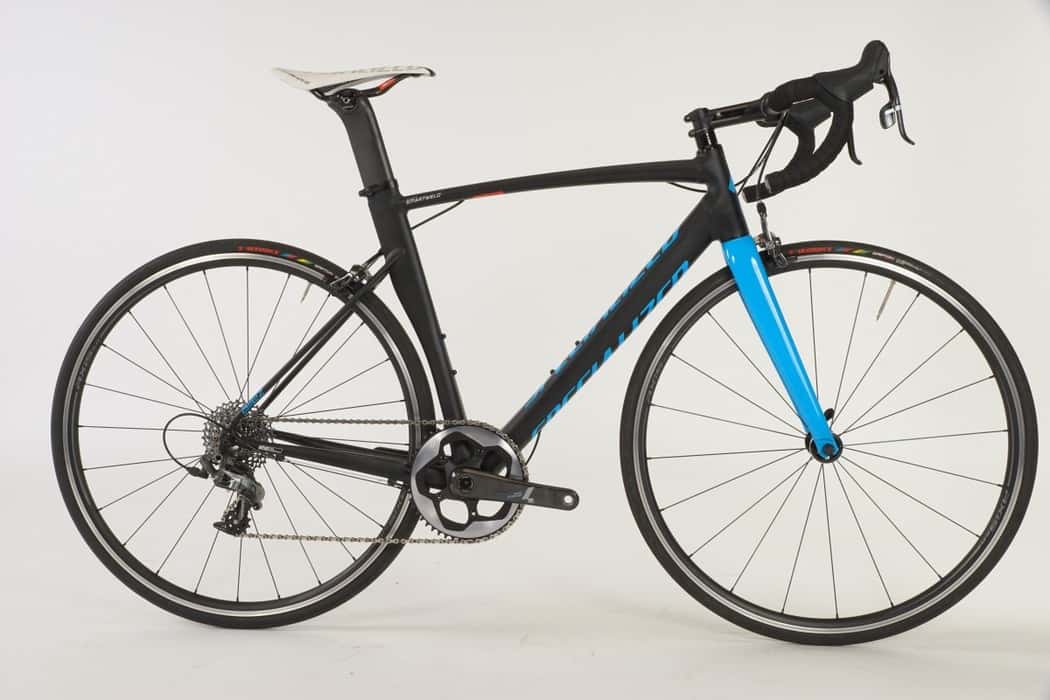 Although the traditionalists probably wince, in the last few years we have seen a steady growth of speciﬁc-use road bikes. From aero-road to endurance road to gravel, the niche categories of bikes have been coming on strong. Never one to wait around for a trend to start before they jump in, Specialized has essentially created their own category of what could be considered a ﬂatland road bike. In fact, their ﬁrst whack at it came last year in the form of the Venge Lunch Race, which took a standard aero Venge frame but ﬂicked the double-chainring drivetrain in favor of a 1x drivetrain.

Even though that bike was only done in limited quantities, it did turn heads. For 2016 Specialized has added to the new ﬂatland category with a less expensive aluminum version based off the Allez that has proven so popular (RBA, April 2015). Welcome the Allez Sprint.

THE FRAME
Even with the addition of the Allez Sprint, Specialized did not drop the previous Allez model; it is now just designated the Allez SL due to its lighter weight compared to the Sprint frameset. Where the Allez Sprint frame sacriﬁces some weight savings, it’s intended to make up for that with aerodynamic features, such as a Venge-like seat tube and post, a truncated aero downtube and narrow-tapering top tube. 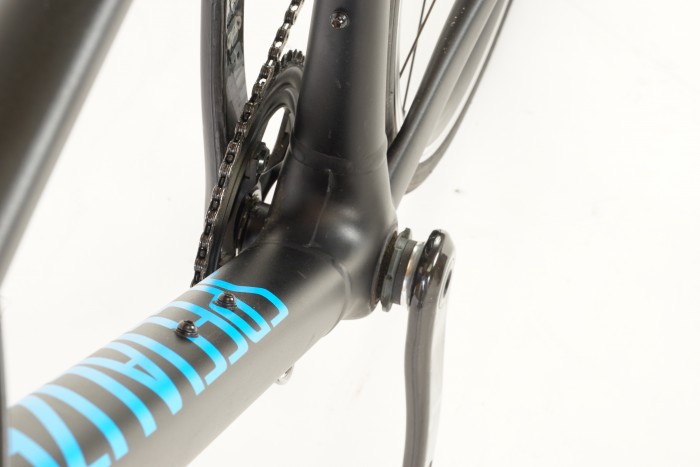 THE PARTS
The launch of SRAM’s Force 1x road groupset created a perfect chance to spec the frame with purpose-built components. Although we’ve race-tested the CX1 version (for cyclocross), this was our ﬁrst time having a test bike with the SRAM Force 1 group. With a 50×32 low gear, we knew we would not be seeing the front of the group on many rides that included an abundance of climbing. Luckily, if you do want to climb and still want the 1x system, SRAM offers a medium cage derailleur for use with an 11-36-tooth cassette, or long cage derailleur for use with an 10-42tooth cassette. 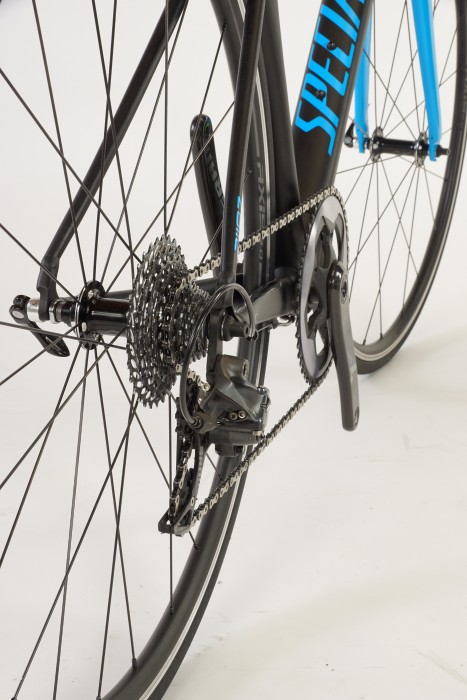 The rest of the bike is tied together with Specialized parts, including an aluminum cockpit, carbon Venge seatpost, Toupe Comp saddle and Axis 2.0 wheels wrapped in 24mm S-Works Turbo tires. The Allez Sprint does come with an S-Works carbon fork to help lighten the front end, but more important, it increases the stiffness when compared to Specialized’s lower-end forks.

THE RIDE
Leave it to Specialized to bring us a bike for two purposes—riding fast and ﬁnishing fast. In Southern California we have an abundance of ﬂat to mostly ﬂat criteriums that are the perfect proving ground to test out the new Allez Sprint X1 Expert. Just as we had predicted, the efﬁciency brought about by the stiff frame in both the head tube and bottom bracket areas was impressive. Whenever a company can mesh enlarged head tube and bottom bracket junctions, the result is usually the same—good handling and power efﬁciency. And so it is with the Allez. It is most notable when stamping down on the pedals off the saddle; the bike feels like it wants to go right out from under you—forward. With the absence of the front derailleur, second chainring, cable, housing and shift mechanism in the left shifter, the Allez tips the scales at 16.8 pounds. 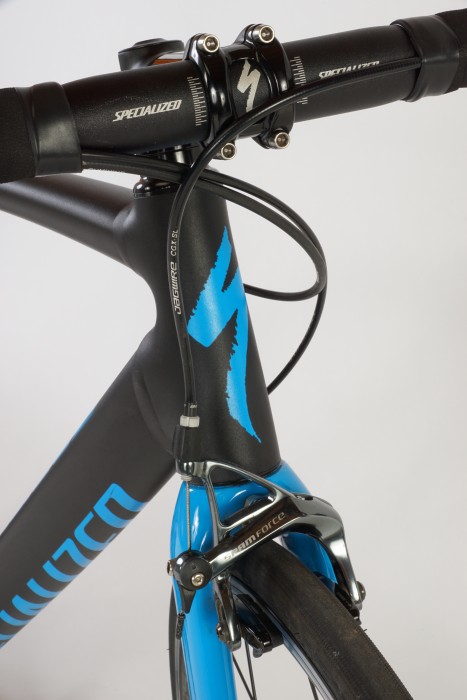 What surprised us most about the Allez Sprint was the unexpected comfort we felt on the rear end. We were half expecting to bounce around on the seat like most would experience with the original Venge. Luckily, it wasn’t a harsh ride. Compared to the Allez SL, the Sprint sports racier geometry with a 150mm head tube (20mm shorter than the Allez SL), a slightly lower bottom bracket height and a 98.4cm wheelbase (versus 98.8cm), which was well-received when riding a criterium-style scenario.

VERDICT
Anyone looking for an ideal criterium race bike can feel conﬁdent adding the Sprint to a must-consider list. In terms of efﬁciency, weight, handling and geometry, as a fast ﬂatland ride, the Allez Sprint is a great setup. Of course, one must remember that it’s very much a purpose-built bike, and that purpose doesn’t include climbing. For $800 less you can also ﬁnd the Allez Sprint Comp, and we hear there will also be a higher-end “Specialized Edition” out soon. 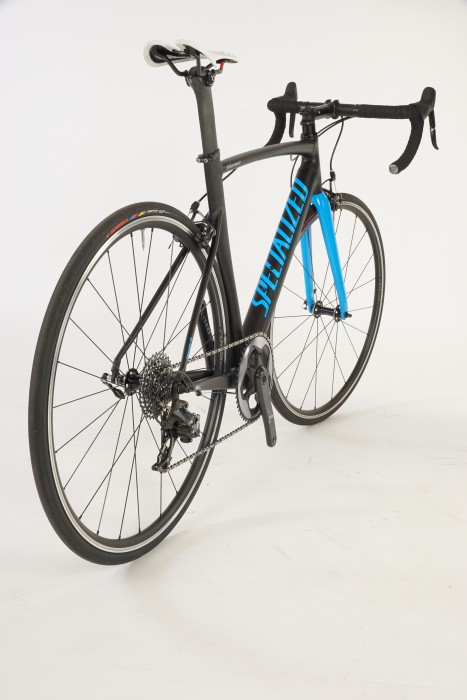 Check out specialized.com for more information