More than 35 SRAM/Avid athletes will compete Feb. 1-2 in the 2014 UCI World Cyclocross Championships in Hoogerheide (Netherlands). Held in the world’s cyclocross hotbed, in the Netherlands, the event is expected to draw tens of thousands of passionate supporters and fans. SRAM is proud to be among them, supporting some of the world’s best. 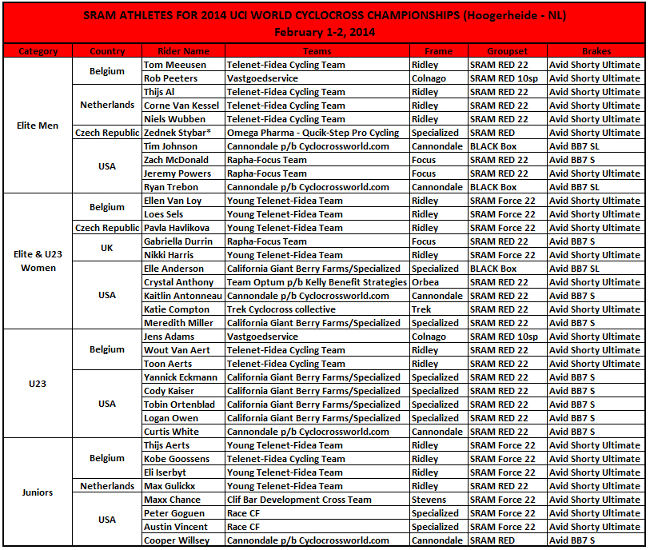 In the Elite Men’s category, our Belgian, Dutch and American SRAM/Avid athletes will try to add the prestigious title to their palmares. We are proud to support for several years experienced and passionate cyclocross athletes such as the recent Nommay World Cup winner, Tom Meeusen (Telenet-Fidea Cycling Team), the 2012 and 2014 US National Champion, Jeremy Powers (Team Rapha-Focus), Rob Peeters (Vastgoedservice), Tim Johnson and Ryan Trebon (Cannondale p/b Cyclocrossworld.com). Two-Time World Champion, Zdenek Stybar (Omega Pharma ? Quick-Step Pro Cycling) may take the start. At this point it is still not confirmed. The last two years, Stybar has been focusing on road racing but has also raced a limited number of cyclocross events during the winter.

At SRAM, cyclocross is part of our DNA. We believe in the young generation and want to help them grow the sport and the passion for cyclocross. SRAM/Avid will have no less than 16 riders in the U23 and Junior categories. Though they are still young, some have already stood out in the international cyclocross scene. Wout Van Aert (Telenet-Fidea Cycling Team) who won two World Cups this year, Logan Owen, the U23 U.S. National Champion (California Giant Berry Farms/Specialized), and Peter Goguen (US – Race Cf-Racecf.Org.), the U.S. Junior Champion.

So What’s Up With the Apps