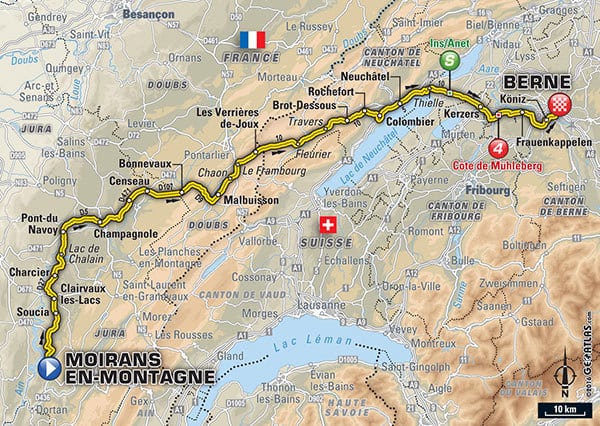 The little common of the Jura area is however a capital: the capital of toys.
Its industry has benefited of several industrial relocations while visitors mainly come in numbers to discover the museum of toys and its collection of 20,000 objects coming from around the world. The start could inspire a rider with a rather playful spirit: Alexis Vuillermoz, winner in 2015 at Mûr de Bretagne and originally from the neighboring city of Saint-Claude.

Sustainable development: More than 300km of walking trails in the heart of Haut-Jura Regional Park and the Lake District, proposals for greenways

After other major Swiss cities like Zurich, Geneva and Basel, already visited by the Tour, 2016 will see the appearance of the federal capital of Switzerland on the race course. However Berne has already brought its contribution to the Tour.
Indeed, one of its children, Fabian Cancellara has been in recent times the most regular wearer of the Yellow Jersey without however winning it, with 29 days spent in command of the race.

Specialities: Vineyards on the northern shore of Lake Biel