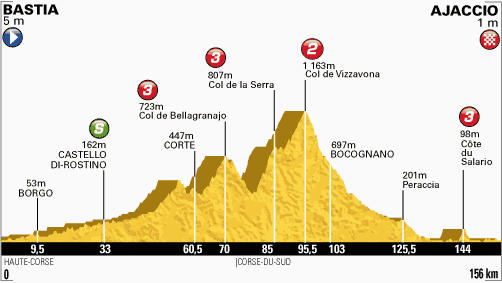 Initially, there will be plenty of hoopla around the yellow jersey: whether it’s Cavendish or Kittel, we should expect the race to unfold in exactly the same way, and the same goes if Sagan has it. That’s because this second stage is a real rollercoaster ride: the Col de la Serra and Col de Vizzavona, followed, at the end, by the Cte du Salario. If you ask us, this parcours is going to cause some real damage! The sprinters will bail out one after another. I even think a team leader who is not in the best of condition? Thinking of how Evans was last year ? could see all of their hopes dashed on this stage, before sinking altogether on the stage that follows, on a course where it will be even harder to hide away… 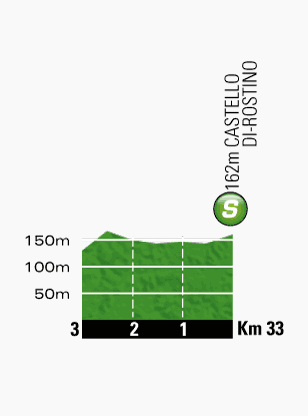 Start-
Bastia
La voie douce (the soft path): this project forms one of the main objectives of this mandature.  The municipality has decided to create a 5 km pathway for pedestrians, cyclists and people with reduced mobility linking Toga (in the North of the town), through the town centre, the Old Port and the Citadelle to the Arinella Leisure area in the South of Bastia.  The first stage of the work has been completed in the shape of the development of the beach in Arinella for the arrival of the Tour de France.??Renovation of Furiani Stadium : four years ago, the President of the Bastian Agglomeration Community, mile Zuccarelli, reaffirmed the political desire of local politicians to rebuild the Armand Cesari Stadium.  This desire translated into an enormous financial input of more than 6 million euros of which a third of the total budget came from the BAC.  Sporting Club Bastia, the most successful and popular club in Corsica has installed itself here whilst the footballers can play in a renovated stadium that can welcome more than 16,000 spectators.
No previous stage
Pop: 45,000
Prefecture of Haute-Corse
Specialties: sardines with brocciu, baccala (cod), fiadone (dessert), Pietra (beer)
Economy: second French passengers port, tourism, administrations.
Celebrities: Cesar Campinchi (former minister), Emile Zucarelli (mayor, former minister), Cesar Vezzani (tenor), Jean Nicoli (Resistance hero), Angelo Rinaldi (writer), Joseph-Marie Farinole (military), Adil Rami (footballer), Henry Padovani (former Police guitarist)
Sport: SC Bastia (football)
Culture: Italian film festival (Feburary), E teatrale (March), Notte di a Memoria (July), Spanish and Latin-American Film Festival (October)
Labels: ville d’art et d’histoire, ville fleurie (2).

Finish-
Ajaccio
The ?les Sanguinaires and the Pointe de la Parata represent a natural space of remarkable quality labelled one of the Grands Sites de France and integrated into the Natura 2000 network.  Situated on the North-West of the Gulf of Ajaccio, la Pointe de la Parata (tower) which almost seems to launch itself into the sea stretches out via an archipelego of fragmented islands called the Sanguinaires Islands.  It is still a mystery as to how they came to be given such a name.  Is it a reference to the purple light that turns the rocks red at sunset or the islands that, in the past, warned navigators that they were approaching Sagone? Wherever it comes from the whole site is home to a rich and diverse collection of flora and fauna.  There are endemic areas and rare plants like the Calycotome, the bruyre marine, the lentiscus and colonies of marine birds such as the mediterranean shag, the Peregrine Falcon, the Osprey or the yellow legged gull.  The development of the Parata enables pedestrians to discover the botanical riches but also to visit the Genoise tower dating from the 16th century and the house of the Parata that is now home to a media library of the sea.
No previous stage
Pop: 65,000
Prefecture of the Corsica region and of Corse-du-Sud department
Specialties: bruccio (cheese), sausage, doughnuts, aziminu (bouillabaisse), canistrelli (biscuits), AOC wines.
Economy: tourism, administrations.
Celebrities: Napoleon Bonaparte, cardinal Fesch. Tino Rossi, Alizee (singers), Roland Magdane (comic), Morio Matsui (Japanese painter), Jerome Ferrari (novelist).
Sport: AC Ajaccio, Gazelec Ajaccio (football), hippodrome of Vignetta, imperial regatta (May)
Culture: Spanish and Latin-American film festival (February), printemps des poetes (March), cinema and history meetings (April), ABYSS undersea pictures film festival (May), Napoleonian festival (August), Italian film festival (October), English and Irish film festival (December), Comics book fair (December)
Labels: climatic resort, town of art and history, Grand site de France and Natura 2000 (Sanguinaires islands and Pointe de la Prata)

Video: Up Close With Levi Leipheimer