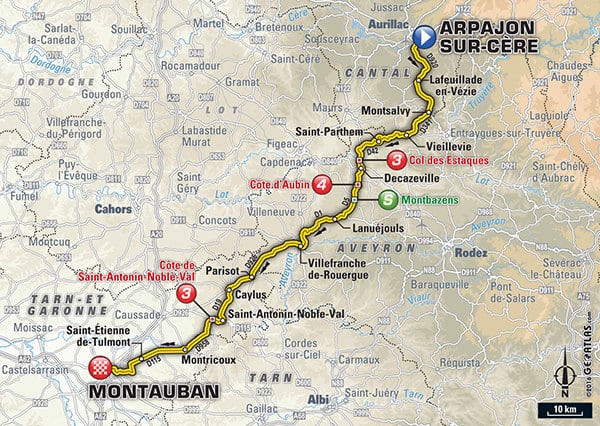 Last summer, the town welcomed a stage of the 21st women’s Semaine Cantalienne race and some might remember a criterium taking place there back in the nineties. But to enjoy the Tour de France, the inhabitants of Arpajon had to travel to the neighboring city of Aurillac. The first time was in 1959 to witness the victory of Henry Anglade, future runner-up to Bahamontes on the podium in Paris. In 2008, Spaniard Luis León Sánchez had triumphed there.

Sustainable development: Walking and mountain bike trails, reducing the use of pesticides in public areas of the town

Slogan: Arpajon, a town in the country

“One should never leave Montauban”. The sentence of actor Lino Ventura in Les Tontons Flingueurs is certainly shared by Jacky Durand who keeps a fond memory of the Tarn-et-Garonne prefecture. In 1998, the Frenchman had won his third and last stage on the Tour. Four other stage winners also lifted their arms in Montauban during the Route du Sud race: Leo Van Vliet (1984), Marcel Wust (1997), Jaan Kirsipuu (1998) and Robbie McEwen (1999).