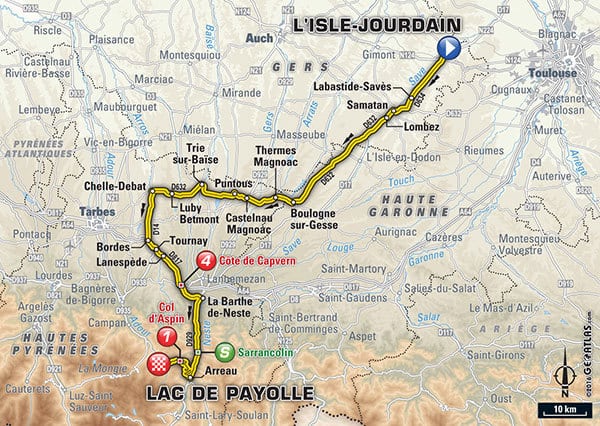 A land of rugby with a club having seen the debuts of future internationals Jean-Claude Skrela and Patrick Tabacco, L’Isle-Jourdain will enter the circle of Tour stage cities. At the heart of the seventies, neighboring town Auch welcomed the pack on three occasions. In 1975, Eddy Merckx, wearing the Yellow Jersey, had claimed a time-trial taking off from Fleurance. One didn’t yet know that it would be the 34th and last stage success of the Cannibal on the Tour.

Stage town for the 1st time
County town in a canton of Gers (32)
8,600 inhabitants (Lislois), 18,500 inhabitants within the 14 towns (including one in Haute-Garonne) comprising the municipality of Gascogne Toulousaine
185,000 inhabitants in the Gers

Specialities: Cuisine based around duck (foie gras, confit, magret…), Gascon pastis (a flaky pie with an Armagnac base)

Distinctions: UVUP green resort (a village, its produce, L’Isle-Jourdain and cycling), poetry town. Centre of Rural Cycling Excellence (the only one in France)

While a finish line was never set on its shores, the riders of the Tour were often able to see and admire the Lac de Payolle. When the pack takes on the climb to the Col d’Aspin from the village of Sainte-Marie-de-Campan, the passage through the nordic skiing resort announces far steeper climbing gradients. In 2015, it was on a downhill that the riders went through Payolle before going up the Tourmalet and eventually reaching Cauterets.

Slogan: The little Canada of the Pyrenees