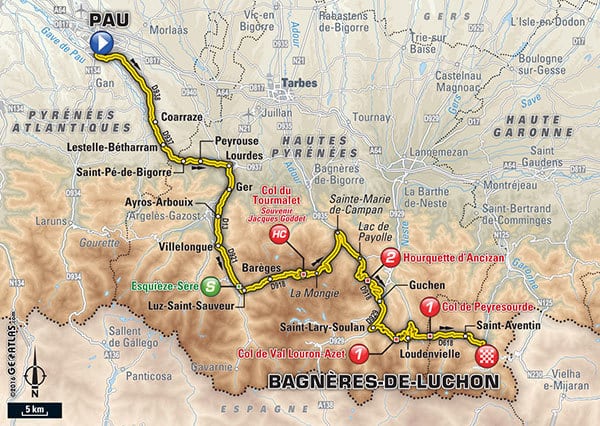 The city of Henry the 4th welcomed the race in style on sixty-seven occasions, which puts it on the podium behind Paris and Bordeaux of the event’s most faithful cities. It is also since last summer, the city of the Giants of the Tour (Le Tour des Géants) with sculptures representing each winner of La Grande Boucle set in the Philippe Tissié stadium. On each figure is the name and the photo of the winner of the concerned year as well as a text written by author Christian Laborde.

Stage town for the 68th time
Prefecture of Pyrénées-Atlantiques (64)
77,600 inhabitants (Palois), 145,300 inhabitants within the 14 communes comprising the Pau-Pyrénées municipality

In 1910, Luchon entered history by welcoming the finish and then the start of the first two mountain stages of the Tour de France, both claimed by Octave Lapize. For that reason, the city deserves the nickname of Queen of the Pyrenees. A hundred years later, a similar program was awaiting the riders of the Tour. Thomas Voeckler triumphed like in 2012. A candidate for a third success in 2014, the Frenchman was finally beaten to the line by Australian Michael Rogers.