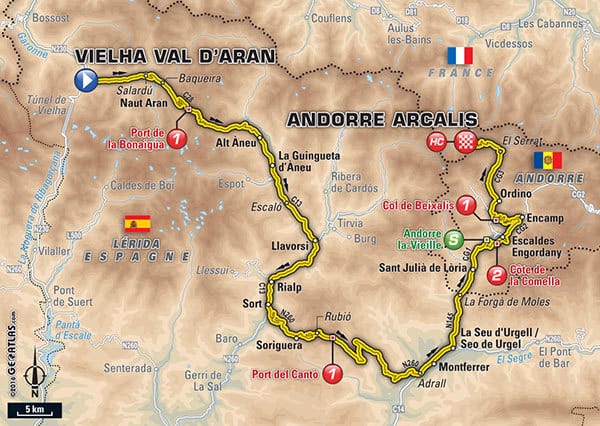 At the heart of the Spanish Pyrenees, Vielha positions itself as both a city that gives access to the skiing resorts of Val d’Aran and as a major road between France and Spain. The peloton of the Vuelta was welcomed here on four occasions. The last one was back in 2008 for the start of a stage won by Greg Van Avermaet who was taking part in his first grand tour.

Slogan: The essence of the Pyrenees

In the middle of the Pyrenees, the Principality of Andorra is one of the smallest sovereign nations of Europe. Its territory offers features that have attracted the Tour de France since 1964 when Spanish climber Julio Jiménez had triumphed after a solo effort. The Grande Boucle like the Vuelta then discovered the resort of Arcalis visited on several occasions. Brice Feillu was the last man to win there on the first mountain stage of the 2009 edition.

Stage finish for the 3rd time
Ordino-Arcalis, a ski resort in Vallnord Ordino ski domain
Ordino, parish with 4,700 inhabitants, 76,950 inhabitants (Andorrans) in the Principality of Andorra

Sustainable development: 21 cycling trails in Andorra, including 20km at Ordino-Arcalis