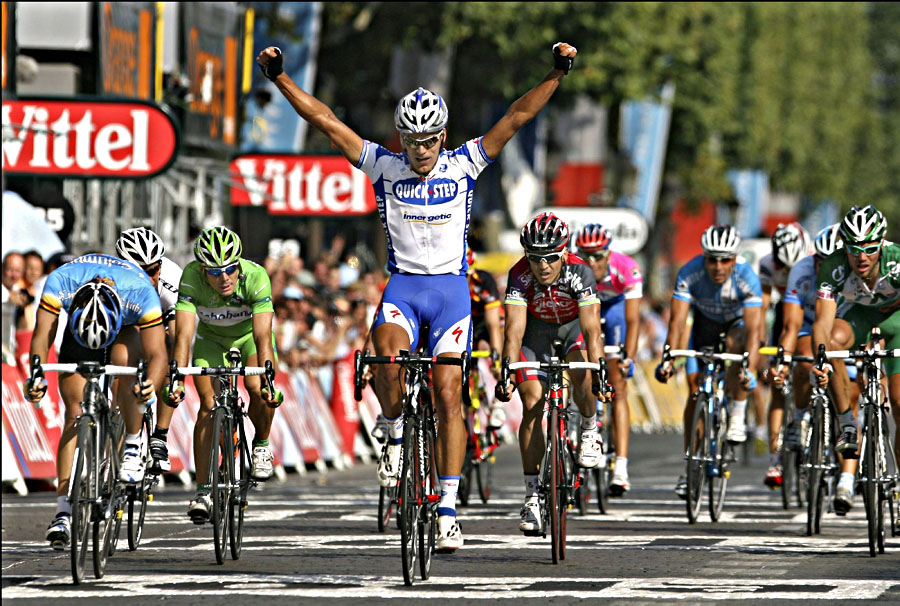 Gert Steegmans waited until the last stage of the Tour de France to grab a stage win. The leadout man for Tom Boonen was able to make the 2008 Tour de France memorable for the Quick Step team on the 143k stage from Etampes to Paris.  The high-hopes for this year’s Tour for Steegmans were overshadowed by the four stage wins of another young sprinter, Mark Cavendish.

Steegmans, a 28-year old Belgian rider, helped Robbie McEwen win two stages in  2006 and then got his own taste of victory in the second stage of the 2007 Tour de France in Ghent as his lead-out of Boonen turned into a victory.

Today’s dramatic stage, that included eight, 6.5 kilometer laps on the Champs-Elysees  saw a flury of riders jump off the front in an attempt to steal the last few vestiges of glory. Gert Steegman’s ended up the eventual victor. The win was a nice parting gift to Quick Step and an example of what his new Russian-backed team,  Katoucha, can expect from the young sprinter for the next two years of his recently announced contract.

Steegmans powered to victory ahead of Ciolek after being led out perfectly by Matteo Tosatto and Steven De Jongh. “I knew the last bend, and that I had to be in first, second or third place if I was to have any chance of winning,” added Steegmans. “Tosatto was so fast that I knew before I jumped out from behind his wheel that I was going to win.”

Steegmans went on to say, “It’s always great to win a stage. And it’s a bit of a relief although at the team meeting last night we were all thanked for our efforts during the Tour.”

The only one missing was Boonen, who was told by Tour organisers in June not to show up after his positive test for cocaine. “Unfortunately he wasn’t here this year, that left a lot of pressure on me and Stijn (Devolder) to get a stage win,” added Steegmans. “The pressure lasted a long time, too long. But the team were always there for me. Finally I’ve got a stage, and what a stage to win. To top it off we beat Columbia, which we are very happy about.”

Carlos Sastre was protected by his team today and walked up the steps to the podium as the 2008 Tour de France winner, making it two in a row for the country of Spain.