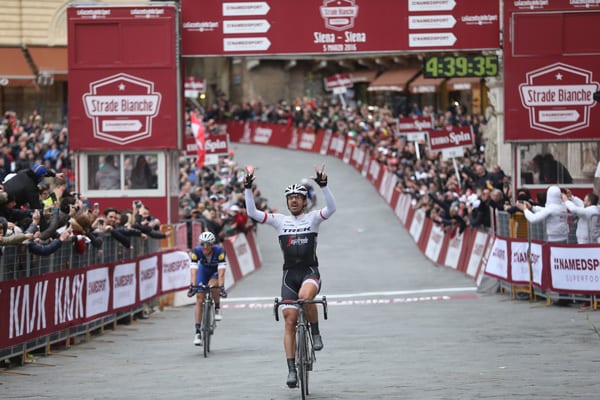 Swiss veteran Fabian Cancellara proved his legs are as strong as ever ahead of the Spring Classics season as he won the Strade Bianche race for the third time in Italy on Saturday.

“This year I really want to go out with a bang,” said Cancellara, riding in
his 16th and final season as a professional. “I want to thank all my team-mates for supporting me today, and all these years. This is just amazing!
I knew that Stybar is a cyclocross guy, so I had to be careful for him. He
won last year as well, and he is very good at this last climb. I am very, very happy. Third time… and now they will name a white gravel section after me, and that’s exciting.”

World champion Peter Sagan of Slovakia was fourth at 13sec at the end of the 176km race around southern Tuscany known for its white gravel roads.

Cancellara, 34, is a three-time winner of both Paris-Roubaix and the Tour
of Flanders.  He missed both events last year after breaking two vertebrae in a crash at the first cobbled classic of the season, E3 Harelbeke in early March  Norway’s Alexander Kristoff succeed him as Tour of Flanders champion, while John Degenkolb of Germany won Paris-Roubaix.

The Rainbow Shines In Tuscany