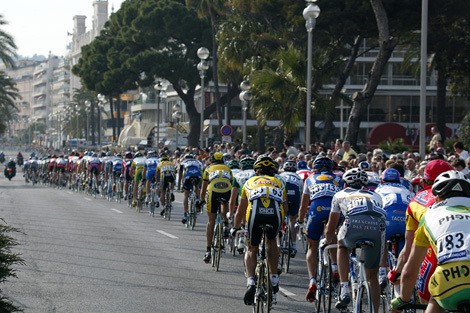 Team Sky’s senior sports director Scott Sunderland has expressed his satisfaction with the recently unveiled parcours of the 2010 edition of Paris-Nice. Tough climbs and bad weather in 2009 prompted a number of recommendations from teams to avoid overly-difficult stages in the early season. Paris-Nice begins March 7 with a prologue time trial in Montfort-l’Amaury and concludes on March 14 in Nice.

“The organizer has made the parcours a little bit easier compared to last year, which I think is a good move,” Sunderland commented. “ASO has definitely had ears for the suggestions of different teams’ managers. That’s great.”

Mont Ventoux, which figured prominently in the penultimate stage of the 2009 Tour de France, was up for possible inclusion on the Paris-Nice course for 2010, but ASO ultimately opted for a more westerly route, full of climbing but without single difficulties on par with the legendary Ventoux.

“I think at this time of year you’ve got to take the weather into account,” Sunderland added. “It’s possible to make it too difficult too early and I think what the organizers have put forward is a sensible solution.”

Tour de France organizer ASO confirmed details of the anticipated Grand Dpart of the 2011 edition of the race, centered around the Vende region on the Atlantic coast. With this year’s Tour beginning in the Dutch city of Rotterdam, the Tour kick-off returns home next year. The first stage will get underway on Saturday, July 2 close to the approaches to the island of Noirmoutier and will end at the Mont des Alouettes next to the town of Les Herbiers.

The following day will see a 23-kilometres team time-trial around the town of Essarts with the third stage leaving from the Vendee coastal town of Olonne-sur-Mer. It will be the fourth time in the last 20 years that the Tour has started in the Vendee after 1993, 1999 and 2005. Tour organizers underlined the fact the 2011 edition will not start with any kind of time trial.

Instead, the race to the uphill finish at Mont des Alouettes will closely resemble the finish to the first stage of the Tour in 2008 when Spaniard Alejandro Valverde claimed a memorable victory at Plumelec in Brittany. The racing will also take in the dreaded Passage du Gois, whose slippery surfaces have wrought havoc on the peloton, including the mass pileup that allowed Lance Armstrong to escape and distance many race favorites in his first Tour victory.

The French island of Corsica is said to be launching a bid to host the start of the 2013 Tour.

Britain’s Bradley Wiggins will make his racing debut in the colors of Team Sky at the Tour of Qatar. Originally scheduled to open his season at the Etoile de Bessges in France, Wiggins has opted to head to Qatar to get the legs rolling as he prepares for his top goal of improving upon his fourth place overall (2009) in the Tour de France.

French climbing sensation Brice Feillu, winner of the 2009 Tour de France stage to Andorra-Arcalis, is thinking ahead to big results in this year’s edition of the race. Feillu broke clear to win alone atop Arcalis, establishing himself as a French hopeful alongside his brother Romain, a sprinter who enjoyed a brief stint in yellow in the 2008 Tour.

“I’m looking for a top-ten finish in the Tour this year,” Feillu commented Tuesday.

This year the Feillu brothers have jumped from Agritubel to the Dutch Vacansoleil team.

“If we have the chance to participate [in the Tour], we’ll go with big ambitions since Romain has put his hand up to race for the green jersey and Brice dreams every night of the polka dot jersey,” team manager Hilaire Van Der Schueren commented at his team’s launch this week.

The Adageo Energy Pro Cycling Team is contributing to relief efforts in Haiti by donating a portion of the proceeds from the sale of its 2010 team clothing to the American Red Cross. Team kits made by Pactimo for the new, U.S.-based UCI continental team will be available for sale to the public through Sunday, January 31. For each jersey purchased, $3 will be donated to the Red Cross. Also as part of the special fundraising drive, Adageo’s affiliate club, Liquid Cycling, will be giving away a free annual membership with the purchase of each jersey.

Adageo Energy Team Director Josh Horowitz said the idea to contribute to such a worthwhile effort made perfect sense with the timing of the sale of the team’s new clothing.

“When Clay Womack (Adageo Energy Founder) and I put this program together, he always wanted it to be about more than just bike racing,” Horowitz said. “So when he came to me to see how we could use the team to help in Haiti, the timing of the clothing sales was perfect.”