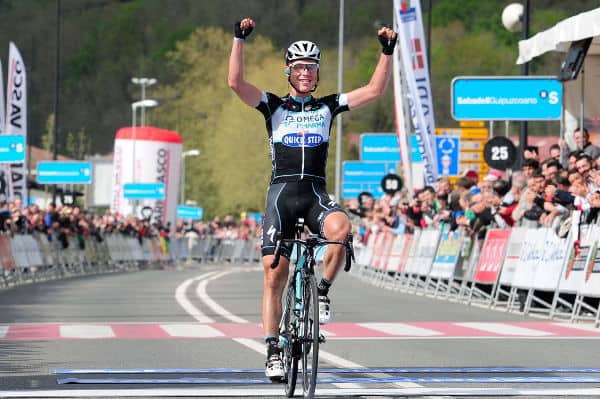 Dutch rider Niki Terpstra attacked just over 6km from home to stun a host of favourites and win Paris-Roubaix at the end of 257km of racing on Sunday. The race had seemed set for a sprint finish among 11 riders but Terpstra took advantage of the marking of favourites Tom Boonen, Fabian Cancellara and Peter Sagan to go solo and win in the Roubaix velodrome after six hours nine minutes and one second. German sprinter John Degenkolb won the sprint for second 20 seconds later with Cancellara third.

Having finished fifth two years ago and third last year, 29-year-old Terpstra, who rides for Omega Pharma, finally delivered on his immense potential on the biggest Spring Classics stage of all. In so doing, he became the first Dutch winner of the ‘Hell of the North’  since Servais Knaven in 2001.

“It’s been a while for the Dutch people. Servais was a teammate of mine in Milram. I learnt a lot from here when we rode Paris-Roubaix together five years ago,” said Terpstra.”I’m happy to close this gap of Dutch wins, it’s (been) too long. Since I was a little child and I started cycling, Paris-Roubaix was the most special race for me. Now I’ve won it, it’s a dream come true.”

Gent-Wevelgem winner Degenkolb said: “Terpstra won the race but we can be really proud of second place. It’s definitely the next step of growing (improving) to be on the podium of a Monument.”

The finish was an anti-climax to what seemed set to be the most thrilling end to the ‘Queen of the Classics’ in many years. Terpstra’s team-mate Boonen had started hostilities 64km out when he attacked on the Beuvry-la-Foret cobbled section – one of 28 separate cobbled section covering a total of 51.1km. He helped close down the gap to the early breakaway and took a host of dangerous riders, including Briton Geraint Thomas, with him.

The BMC team of Belgian Greg Van Avermaet, who was second in last week’s Tour of Flanders, led the chase, with Cancellara – the reigning champion here and winner in Flanders – biding his time. A lead group of six opened up a 50-second lead but with 38km left, Belgian Sep Vanmarcke – second to Cancellara last year and third in Flanders – led a counter-attack, taking Cancellara with him.

That closed the gap to under 30 seconds before they sat up and Sagan was next to try to close the distance, which he managed with 24km left. Within a few more kilometres, another Vanmarcke-Cancellara acceleration breached the peloton’s gap to the leaders and almost immediately, that pair went on the attack.

Degenkolb, Boonen’s team-mate Zdenek Stybar and Sagan went with them, with 2012 Tour de France winner Bradley Wiggins in a group of six chasers who kept the gap at only 15-20 seconds.
Wiggins’s Sky team-mate Thomas worked hard with Boonen and Terpstra to join the quintet in front with 9km left.

That made Degenkolb, as the best sprinter, the main dangerman and as the favourites watched each other to see who would make a break for home, Terpstra jumped away with just over 6km remaining. Initially no-one reacted and he quickly eked out a lead of over 10 seconds, at which point it was clear the rest were racing for second.

“When it came together in the last few kilometres at the end of the cobblestones (sports director) Wilfried (Peeters) told me to attack and 20 seconds later I was able to do so,” explained Terpstra. “Wilfried said we go for the sprint with Tom but if you can attack it’s always good to open the final. They know I like to attack so it was good.”

Sagan was sixth while Wiggins trailed home in ninth and Boonen a disappointing 10th.