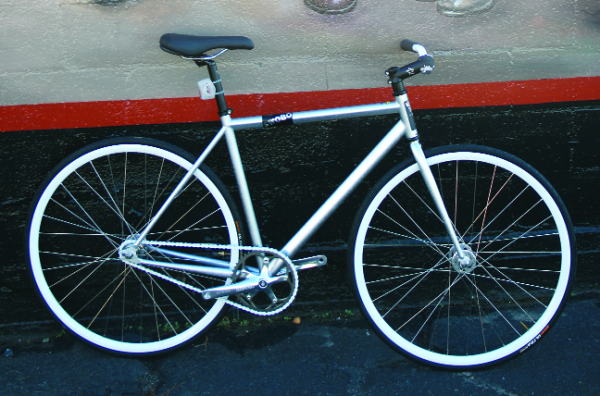 This is the story of the Swobo Sanchez-a chromoly-framed, fixed-gear, flat-bar bicycle-and the rediscovery of the pedal-powered, two-wheeled partnership between man and machine.

Stripped to its essentials, the bicycle is the most efficient means for one person with which to travel the roadways that crisscross our modern world. Somehow, in our more-is-better world, we have been compelled to accessorize the bicycle into a sort of transportation-theme Christmas tree, bristling with ceramics, advanced composites, surface treatments, mystery alloys and clickety clack, do-dadic transmissions. We have smothered a beautiful maiden with Edwardian fashion. The essential bicycle has been reduced to a mannequin concealed beneath a glittery coiffeur of brand-name accessories and standout features. We describe the bicycle by the articles that adorn it, and rarely give measure to its ability to lever the efficiency of our meager bodies to travel cross-country faster and farther than all but the birds.

Sanchez is the naked bicycle: two pedals, a crankset, a chain, two wheels, a seat and a handlebar, all bolted to 12 sticks of welded steel tube. You pedal it to go and you pedal it to slow-that’s it. I dare you to resist the temptation to describe the Sanchez according to what it does not possess. The beauty of it is contained within its technological vacuum. It is the bicycle.

Slide the Sanchez out of its box, bolt on the front wheel, clamp the seatpost in place, screw on the pedals, attach the handlebar and pump up the tires. It all happens so quickly that most owner-assemblers will stand and stare at their new Sanchez in vacuous expectation. It takes a few moments to realize that the bundled item they removed from the made-in-Taiwan box seven minutes ago is now ready-to-ride, functional transportation for one.

Roll into traffic for the first time and sense the heightened awareness that comes from the discovery, fresh in your mind, that you must plan ahead to slow down, and that stopping may require an act of brute strength. Spatial orientation is survival. Mark the position of every vehicle on the highway and listen for sonic inflections that engines and radial tires make when drivers become erratic. Riding a fixed gear bicycle is similar to a martial art; one looks well ahead, assesses the traffic pattern, and flows through danger in a series of fluid curves and accelerations.

A fixed gear bicycle rolls quietly-just the hiss of rubber on asphalt and the whir of chain rollers advancing against sprocket teeth. The Sanchez quickly melts from one’s conscious awareness. Bicycle and rider become one-the body fades away and the central nervous system is reduced to direct communication between the brain and the pedals. There are always two routes: the intended direction of travel, and the backup-the hole in traffic to the left, used to dart around the jerk who makes a desperate right turn in front of you; or the wheelchair ramp that leads to an open stretch of sidewalk. A quick turn to avert disaster also saves leg power that would be wasted pumping to a stop or forcing a skid.
Devoid of logos, and with its galvanized-looking powdercoat paint, the Sanchez appears as if you have owned it for quite a while. Two rides and you’ll feel that it’s been yours for a year. The Sanchez doesn’t need a reason to ride, just a place to go-and it blends with Levis, wool or spandex. When you first ride it, the attraction is its funky simplicity and fixed gear. Two months later, you’ll choose it because it feels right.

Swobo designed the Sanchez in part to address the urban fixie cult, but it has the potential to strike a chord among a much greater body of cyclists-those who have been stuffed to the gag reflex with needless gadgetry in the false hope that screwing 6000 dollars worth of doodads onto the basic bicycle will win them the Tour de France. Swobo has a better idea: throw a leg over a Sanchez and remember what it was that caused you to fall in love with cycling in the first place. Ride and repeat.

Lost and Found in Managua: The Vuelta De Nicaragua