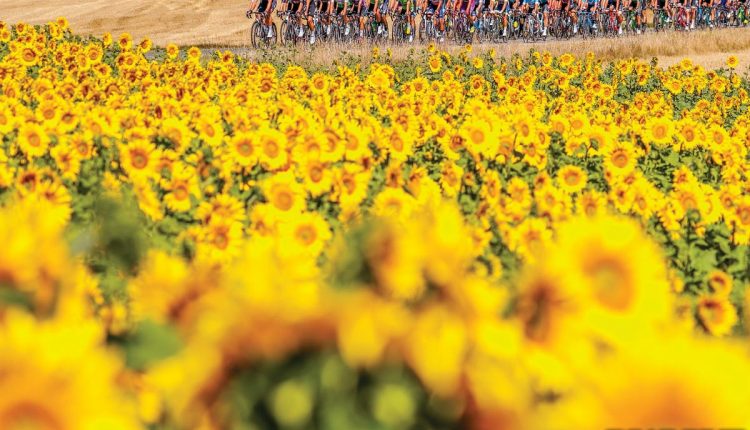 We’re guessing that when you heard the news of the Olympics being canceled, you took that pretty hard. Though the Olympics are the biggest stage that any athlete can appear, the reality is that they are not all that consequential for cycling.

No, for die-hard bike geeks like us, the collision of depression and heart-ache came when the promoters of the Tour de France also threw in the towel with no word of a replacement date. Sure, the reality of a huge race going off in July with so much unknown was far-fetched. But a summer with no Phil Liggett or Bob Roll?! Talk about being devastated!

And then it happened. Just when racing fans thought all hope to witness some bar-banging action was lost, the first week of May brought a glimmer of hope when the UCI released a tentative schedule of races that would include La Grande Dame Tour de France, along with a majority of big-name events.

What the normally 10-month-long WorldTour season came down to was a wildly truncated version that stuffed everything from Strade Bianche and the Vuelta a Espana into a four-month micro-season. Below is the full (tentative) schedule, which, for the first time, will include a women’s version of Paris-Roubaix (all events marked with an asterisk [*] include a women’s race). 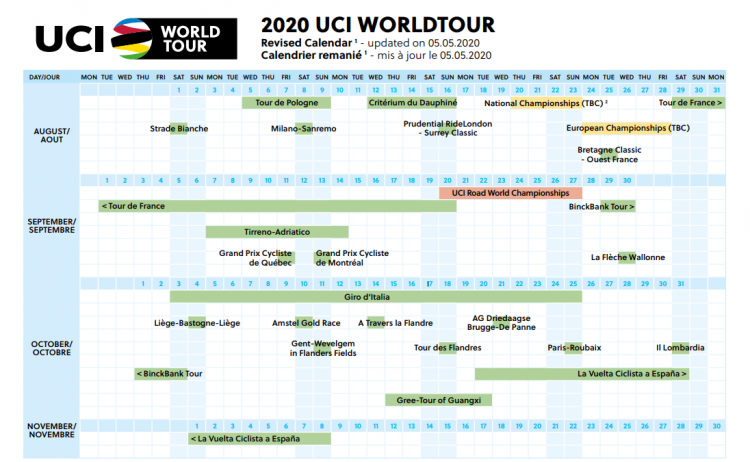 The Giro di Lombardia, one of road cycling’s  five ‘Monument’ races, has been moved forward to August 15 from its  traditional October date, the sport’s governing body UCI announced on Friday.

The Italian race, considered the most important of the autumn Classic races, has been shifted to the summer heat as cycling tries to reorganise a  2020 calender turned upside down by the coronavirus pandemic.  It will now take place just a week after Milan-San Remo, a spring Classic  which is usually held in March but has been pushed back to August 8, and two weeks after the first race of cycling’s return, the Strade Bianche in Tuscany.

The new date for the Giro di Lombardia, confirmed in a UCI statement, means it risks missing out on big names as it overlaps with the Criterium du Dauphine, one of the most important preparatory races for the Tour de France, which this year begins on August 29.

It is another move which will anger Italian cycling fans after the Giro  d’Italia was shifted to October 3-25, when it will overlap with rival Grand Tour the Vuelta a Espana and three Monuments. The calendar shift comes as the UCI approved a new schedule proposed by the Professional Cycling Council, a body comprised of rider, team and race organiser representatives.

Three races — the Eschborn-Frankfurt, London-Surrey and Across Flanders — have been cancelled for this year.

The Vuelta a Espana, to be held between October 20 and November 8, will begin in Irun and end in Madrid, according to the final route announced on Friday.

Two Portuguese cities have been withdrawn from the race due to the coronavirus crisis, with Porto and Viseu replaced by Zamora and Salamanca respectively.

The 75th edition of the event, which is one of cycling’s three grand tours, will include 18 stages after the cancellation of the first three stages in the Netherlands.

Chris Froome Reviews his Comeback on the Anniversary of Breaking Leg