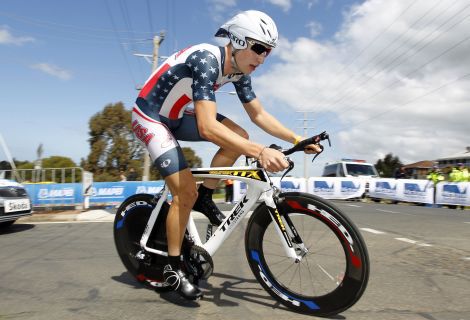 Phinney confirmed his status as one of the most exciting talents in the sport in winning the men’s under-23 time trial, although his winning margin was 1.9sec for a similarly difficult 31.8km race.

Australian Luke Durbridge came second to take the silver with German Marcel Kittel finishing third to take the bronze, 24secs behind the leader.

Phinney, the son of former cycling champions Davis Phinney and Connie Carpenter, has a string of national junior titles and won the under-23 version of Paris-Roubaix, arguably the hardest one-day classic on the calendar, in 2009.

Later that year, Phinney succeeded Britain’s Bradley Wiggins as world individual pursuit champion on the track, a title he defended in Copenhagen earlier this year.

Having spent two years with Lance Armstrong’s under-23 team, Phinney decided instead last week to sign for the BMC Pro Tour team.

“It wasn’t an easy course, especially for us big guys. I really had to dig deep,” said Phinney, whose emergence as a talented road racer has left him with doubts over his Olympic future on the track.

As well as the world individual pursuit champion, the 20-year-old is also reigning world champion in the multi-race omnium, which will make its debut at the London Games in 2012.

“I had a lot of passion for the individual pursuit, but now it’s no longer on the programme. We’ll see (about the omnium),” Phinney said after his gold win.

“I plan to do some track (racing) this winter. Track is good, but I’m lacking the passion that I’m now starting to have for the road and time trialling.”

Pooley, the women’s Olympic silver medalist in Beijing, overcame a last-minute technical hitch to claim her maiden world title with a winning time of 32min 48secs in Geelong, Australia.

Germany’s Judith Arndt came second, 15secs in arrears, to claim a frustrating third silver in the race against the clock, while New Zealander Linda Villumsen, who won bronze last year for her native Denmark, finished third.

A climbing specialist who only took up the sport in 2005, Pooley’s bid for gold almost came unstuck when International Cycling Union (UCI) officials said her time trial bike did not comply with regulations.

She had to use a teammate’s bike and, after making a few last-minute adjustments, got on with the job in hand.

Having trained specifically for the event, Pooley was unshakable and she put her climbing skills to good use on the hilly 22.9km circuit.

“The Olympic Games is pretty special, but in a way, that was easier for me because I had no expectations and no pressure,” she said.

“This time it was different. I trained specifically for this, doing a lot of hill training and intervals on my time trial bike. Now I get to wear the world champion’s jersey with the stripes for a whole year.”

THE REST OF THE WORLDS PROGRAM
Here is the race schedule for the remaining events at the world road race cycling championships currently being held in Australia.
Thursday, Sept 30
Elite men time trial (45.4km)

HTC-Columbia Puts Two Women On the TT Podium
HTC-Columbia women’s team riders took two of the top three spots in the World Championships Time Trial in Australia on Wednesday, as well as placing four riders in the top nine.

Judith Arndt claimed the third silver medal of her career for Germany on the challenging 22.9 kilometre course in Geelong, 15 seconds behind winner Emma Pooley of Great Britain.  It is the fifth time in 13 years that the ever-consistent Arndt has taken a podium placing in the Women’s Time Trial.

Meanwhile, HTC-Columbia team-mate Linda Villumsen of New Zealand claimed bronze for the second year running. Villumsen crossed the line a mere seven tenths of a second slower than Arndt, but with an ample 22 second advantage on fourth placed Amber Neben of the USA.

Arndt and Villumsen were closest to victory but several other HTC-Columbia riders turned in very strong rides for their countries. Riding in her first year as a professional, USA rider Evelyn Stevens powered to sixth place as well as briefly leading the event, whilst  Emilia Fahlin of Sweden took ninth and Italy’s Noemi Cantele finished twelfth.

Following an impressive all round performance by the women, HTC-Columbia will once again be strongly represented in the men’s individual time trial on Thursday, with seven of its riders set to roll down the start ramp for the 45.8 kilometre course.

The four other HTC-Columbia riders participating are 2010 Tour of Spain podium finisher Peter Velits and twin brother Martin for Slovakia, Tejay Van Garderen for the USA and Kanstantin Siutsou for Bylorussia.