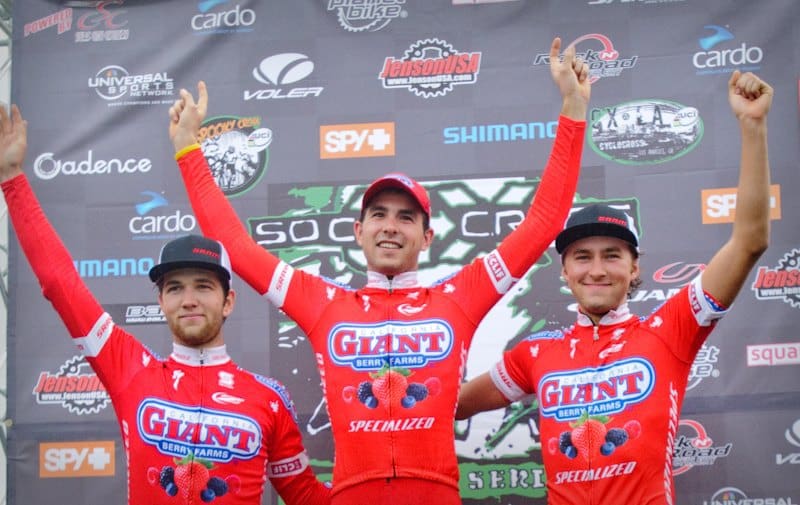 Three National Cyclocross Champions will headline the strong California Giant Berry Farms/Specialized team which will offer a deep mix of youth and experience for the 2013-14 cyclocross season. The six-rider squad will contest a domestic schedule with a few select European World Cup races with the aim to represent the United States at the 2014 World Cyclocross Championships to be held in Hoogerheide, Netherlands.

The squad includes four under-23 riders: Current U23 National champion Yannick Eckmann, 2012 Junior National Champion Logan Owen, 2009 Junior Cyclocross National Champion Cody Kaiser and Tobin Ortenblad who finished third to Eckmann at the 2013 National Championships. Rounding out the team are returning rider Meredith Miller and new to the squad, up and comer Elle Anderson, both racing in the elite women’s field.

‘We’re very excited to have the U23 and Junior National Champions on our roster with Yannick and Logan, we expect big things from them. Although we are an under23 team, we feel that we have contenders in the elite men’s field with all four young riders. We’re also very happy to bring Elle onboard, she had a great road season and I think Meredith is really excited to mentor her new teammate.’ said Team Manager and VP of Sales for California Giant, Anthony Gallino.

The athletes will be riding the Specialized S-Works Crux Carbon powered by SRAM RED 22 and Zipp wheel sets. Tyler Frasca, USA Marketing for Specialized Bicycles, noted, ‘It’s great to continue working with the California Giant Berry Farms Cyclocross team. The 2013 squad shows Cal Giant’s dedication to developing the sport, and is a perfect match to Specialized’s ambitions. We continue to develop the bikes and equipment, and Cal Giant is providing the best young riders in the country to help us test and refine the lineup.’

In his second year as an espoir, Eckmann is motivated to defend his Stars and Stripes at the 2014 USA National Championships which will be held Boulder, Colorado. ‘I am super excited to be part of the Cal Giant team this year and with that trying to defend my title as U23 champion in my own hometown. I can’t wait for the season to start.’

After dominating in the junior ranks which included winning eight consecutive cyclocross National Championships, Owen is looking forwards to racing as an under-23 racer. ‘I’m really excited to be apart of such a well established program that is also a well respected team. I’m hoping that this year I can gain some more experience racing professionally in the U.S. and hopefully podium at some UCI races as well as a few World Cups. I can’t wait to get this upcoming cross season underway!’ 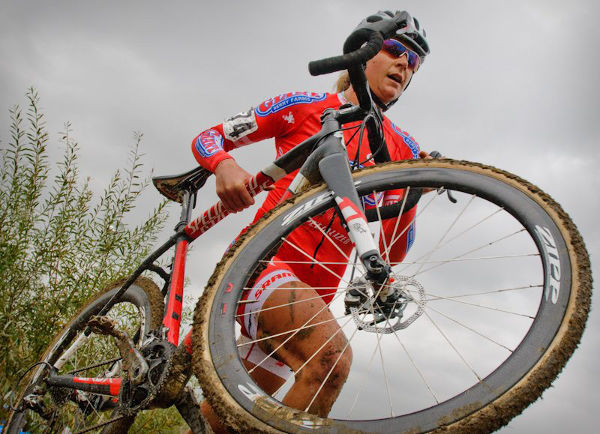 Veteran Miller (above) is hoping to return to the top step as well is sharing her knowledge with her new teammate. ‘Since beginning my cyclocross career six years ago, I am proud to say that I will once again be returning to Cal Giant/Specialized as a six year member of the team. It will be another exciting year as we have several returning riders and a couple new standouts joining the team. Personally, I am aiming to redeem myself after an up and down season last year when I broke my hand in October. Although I had a strong European campaign and made the World Championships team, I finished the season feeling disappointed and empty. Undoubtedly, I will am looking forward to the upcoming season with a strong sense of motivation.’

Miller continued, ‘Especially exciting is my new teammate, Elle Anderson. She’s a talented young rider with a natural gift on the bike. Her enthusiasm and quest for success will bring a new passion to the team that will be invigorating. It will be a pleasure to ride with her both as a mentor and a teammate. Between the two of us, we will bring a lot of strength to the women’s field!’

Embarking on her second year of racing cyclocross, Anderson is incredibly excited for the 2013-14 season. ‘To be part of a world-class team like California Giant Berry Farms/Specialized is an amazing opportunity for me, both to learn from talented teammates and have the resources and equipment to perform at my best. I am looking forward to racing with Meredith Miller as my teammate this year, and gaining more racing experience and skills at the highest level of the sport. This season I’m hoping to build on what I learned and accomplished last year, and to take my racing to the next level. I’m already excited for a good performance at National Championships this year, as I love the course and venue at Valmont Bike Park in Boulder, CO where Nationals will be held this year.’

With the demise of the USGP of Cyclocross, Gallino will be seeking to take advantage of the abundance of UCI races across the United States while making sure the team is represented in all the big races. ‘We are deep and we’ll be able to spread riders around to different regions for brand recognition and to get valuable UCI points.’

Following a mini-camp in Northern California, the squad will race its first UCI event at the 2013 CrossVegas in Las Vegas, NV on September 18.

Interbike Preview: Greg Lemond Is Back!