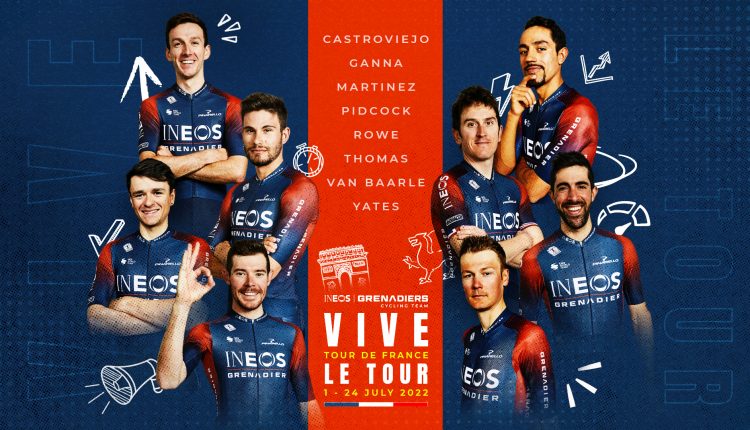 When it comes to dominating the Tour de France, over the last decade no team has proven as successful at the task as Team Ineos. For their 2022 the British based squad is relying on both race veterans like former winner Geraint Thomas and up and comers like Tom Pidcock.

INEOS HEADS TO THE TOUR

The INEOS Grenadiers are proud to confirm the lineup to compete at the 2022 Tour de France with eight riders ready to go all in and attack the 109th edition of the race.

Two-time reigning world time trial champion Ganna and all-round racer Pidcock are set to make their Tour de France debuts, while the experienced backbone of the Grenadiers is provided by Castroviejo, Rowe and Paris-Roubaix winner Van Baarle who arrive in Copenhagen with a combined 20 Tour de France starts.

INEOS Grenadiers Team Principal Sir Dave Brailsford said: “The competition this year is tougher than ever and that’s a great thing for the sport, the Tour and the fans. But we all know that anything can happen in cycling, especially over three weeks of hard racing across different terrains and weather conditions. This group of Grenadiers is the epitome of all that INEOS stands for. They have the grit, rigour and humour that we know is critical to success at the Tour and we can’t wait to get racing.”

INEOS Grenadiers Deputy Team Principal Rod Ellingworth said: “We’ve got a really dynamic and versatile group of riders that are ready to go full gas and really take this race on.

“In Adam, Dani and Geraint we have three fantastic GC heavyweights who can mount a real challenge. They have proved their form across the season and are lining up in Copenhagen in great shape.

“It’s also a proud moment for the team to see Filippo and Tom make their Tour de France debuts. They’re phenomenal riders who have big careers ahead of them and both are ready to leave their mark on the Tour. And no team could ask for three better super domestiques than Dylan, Jonathan and Luke. Collectively they have racing instincts and experience that are second to none.”

Fresh off a courageous ride at the Giro d’Italia, Castroviejo brings an invaluable blend of experience and climbing skill. A selfless teammate, he has evolved from a time trial specialist to one of the best mountain support riders in the peloton. Often going above and beyond to take huge turns on the front, his steady support and calming presence will be key across the three weeks.

Filippo Ganna has rapidly risen to become one of the best time trialists in the sport. A two-time World Champion, the Italian starts his first Tour de France with the intention of replicating his incredible results at the Giro d’Italia. Ganna racked up six stage wins across two editions, pulling on the pink jersey in both 2020 and 2021. He’ll be gunning for the yellow jersey in Copenhagen, but will also play a key team role once the climbing begins.

One of the most consistent general classification riders in the peloton this season, Martínez claimed overall victory at Itzulia Basque Country, in addition to an overall podium finish at Paris-Nice. The Colombian won a stage at the Tour de France in 2020 in the same year he won the Criterium du Dauphine. The climber will be one of the team’s three leaders this year as he begins his eighth Grand Tour.

One of the sport’s most exciting young talents, Pidcock has risen through the ranks, taking titles and world championships in cyclo-cross and mountain biking. Now in his second year as a pro on the road, the young Brit tackles his first Tour de France. In addition to gaining experience and learning from team mates, he’ll play an important team role on the flat and in the medium mountain stages.

Lining up for a milestone 10th Grand Tour and eighth consecutive Tour de France appearance, Luke Rowe knows what this race is all about. A road captain since the early years of his career, the Welshman is a great leader and loves nothing more than battling it out for position in the peloton and crosswinds. He can also turn his hand to climbing and has form of setting an impressive tempo on the front for long periods.

One of the most experienced and well-liked riders in the sport, Geraint won the Tour de France in 2018, cementing his status as a British and Welsh hero. ‘G’ was also a runner up at the Tour de France one year later and knows exactly what it takes to win this race. With a background on the track and comfortable on any terrain, he is a true all-round talent. Whether he’s riding for overall victory like his performance at the recent Tour de Suisse or giving it his all to help the team, he is always all in for the win.

Arriving in Copenhagen following a dream Classics season that saw him win Paris-Roubaix, Dylan has shown what an impressive and versatile rider he is. After battling it out across the cobbles during the spring, the Dutchman has the skills to transform himself into an elite mountain support rider for the Tour each year. His performances continue to improve and he will play a key role in setting a tempo on the climbs this year.

One of Britain’s best stage racers, Adam Yates holds a top-10 finish at all three Grand Tours and only just missed out on a Tour de France podium with a fourth in 2016. He knows how to ride at the sharp end of a three-week race and can produce a stinging turn of pace in the mountains. As a protected rider with a leadership role, he heads into his 11th Grand Tour ready to battle it out in the mountains.

CORSA PRO COFFEE – THE LIFEBLOOD OF SO MANY