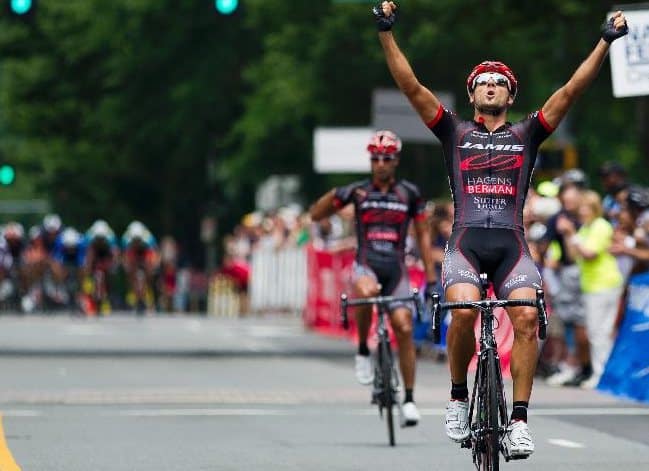 JJ Haedo and Luis Amaran joined a four-man move that held off the chasing pack on the final day of racing at the Air Force Association Cycling Classic Crystal City Criterium. After a great team effort to stay away from the field, JJ was able to capitalize on the hard work of teammate Luis to sprint and win the race out of the four-man breakaway. Luis held on to finish on the podium alongside JJ in third place.

Demis Aleman and Luis Amaran finished second and third after an especially fast and difficult first day of racing.  The Clarendon Cup is a technical criterium that takes riders for 100 laps of a 1 km circuit just outside our nation’s capitol.  Demis and Luis were among an eight-rider breakaway that broke away midway through the race. The riders worked well together and eventfully managed to lap the field with 33 laps to go. When the breakaway riders reintegrated into the field, the team came together to set up a lead out to move them to the front for the finishing sprint. After a very hard day of racing they were able to outpace many of their breakaway companions to take second and third on the day.

The team will be racing this week at both the Nature Valley Grand Prix and the Tour de Beauce.

Visit www.jamishagensberman.com for information on the 2013 team and race schedule.
Press Release