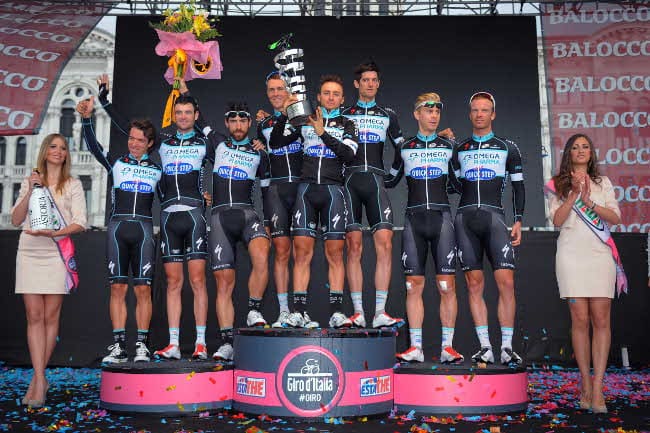 Omega Pharma – Quick-Step Cycling Team made history at two different races on Sunday. Rigoberto Uran became the first rider in team history to make the podium of a Grand Tour. Tony Martin made his own history at the Baloise Belgium Tour, becoming the only rider to win the race three times. He not only won the race three times, he won it three years in a row.

Uran spent three stages in the Maglia Rosa after winning the Stage 12, 42.2km ITT from Barbaresco to Barolo. OPQS initially put him in good position by placing 2nd in the 21.7km opening stage team time trial.

Quintana took the pink jersey by winning chaotic Stage 16, which included the Gavia and the Stelvio in some bad weather. He solidified his lead in the Stage 19, 26.8km mountain ITT from Bassano de Grappa to Cima Grappa.

OPQS fought hard until the end, putting three riders with Quintana on the final climb of Monte Zoncolan in Stage 20. Wout Poels and Pieter Serry did fantastic work in support of Uran in that stage, finishing 20th and 27th respectively.

OPQS won the Team Points Classification. OPQS also remains at the top of the UCI WorldTour ranking, with 789 points.

“This Giro was a great experience,” Uran said. “We were consistent for three weeks and did what we had to do to reach the podium. We started with a great team time trial in Ireland, which put the whole team into a good mood immediately. It was then a question of saving energy and playing things correctly in terms of tactics in order to arrive at the first ITT in the best position. That time trial was a key moment. We knew it could be crucial for our GC chances and we did really well.  It was also a great memory when I put on the Maglia Rosa, as I was the first Colombian to do so at the Giro. We had a gap on our competitors after that stage, and then we relied on a good strategy to defend the Maglia Rosa. Then we had that stage with the Gavia and the Stelvio. After that stage we fought until the end. I think we have to be proud of my 2nd place and that the whole team rode really well. We always had a good team spirit. I have to say also that I discovered a great public at this Giro. The Colombian fans were always supporting me. Today it was fantastic to see all the Colombian flags in front of the podium under the rain.

“However, the Italian public was also really kind with me. It felt a little bit like riding in my home country. So, given the whole experience, I am happy. We made history with my podium place. It’s the first time that OPQS reached the podium of a Grand Tour. We are really thrilled about it. Hopefully this can be the first of a series of good performances. This team a tradition of being good in the Classics and one-day races, but we should we now also have riders for the Grand Tours. We have entered into a new dimension with this Giro.”

Martin Makes Race History, Wins Overall for Third Straight Year
Omega Pharma – Quick-Step Cycling Team did everything they could to control the race and help Tony Martin make history at the final, 178.7km Stage 5 of the Baloise Belgium Tour on Sunday.

Martin went into the stage in the red jersey. He was the two-time defending champion, and had the chance to be the only rider ever to win the overall three times, let alone three years in a row.

The race came back together with 32km to go, but GC contenders launched attack after attack on the two-lap circuit with six climbs each, including the Mur de Huy. Sylvain Chavanel (IAM Cycling), Tom Dumoulin (Giant-Shimano), and even Philippe Gilbert (BMC Racing Team) in the points jersey did their best to get a gap. But OPQS continued to control the race, all the way into the final kilometers.

Martin didn’t just win the overall, however, He launched an attack after the final intermediate sprint section, with 4.7km to go. He went away with Bram Tankink (Belkin Pro Cycling) and Dries Devenyns (Giant-Shimano). The trio were caught in the final meters, but there was no doubt that Martin would win the overall and solidify his place in Baloise Belgium Tour history.

Niki Terpstra, who worked hard for Tony on the front, was 4th. Paul Martens (Belkin Pro Cycling) won the stage. Francesco Gavazzi (Astana) was 2nd, and Greg Van Avermaert (BMC Racing Team) was 3rd. There was a nasty crash just before the finish, but Martin was able to avoid the riders and cross safely.

Martin’s historic win is the 36th for OPQS, in three disciplines, in 2014. Martin has four wins this season.

“Today we rode splendidly, we really controlled the race since the beginning,” Martin said. “We knew this stage wasn’t hard like last year’s final stage, but enough to put us in trouble in case of attacks. But, we took a good tempo and controlled the race in every situation. We did the Mur de Huy twice and did 12 climbs in total, but we were always in control. I tried to attack but Tankink and Devenyns didn’t want to go full gas until the finish. But OK, we already secured the victory. I think this was really a team victory and I’m really happy about it. Also I’m proud I’m the only rider to win this race three times, and especially because it was three times in a row. I made history in Belgium and we’re a Belgian team. I’m happy to give this win for OPQS at what is really a home race. As for me, my next race will be Tour de Suisse. There’s a prologue and a TT and I’d like to do well and make a mark at this race.”

The July Issue Has Landed – VIDEO