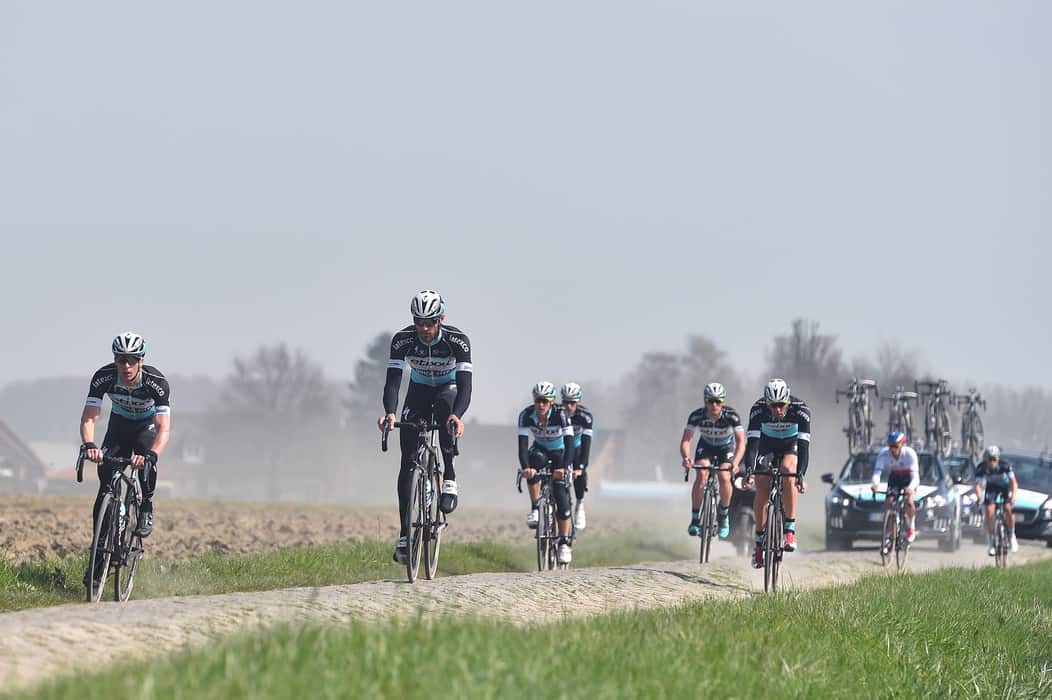 Quick-Step has announced the selection that will participate in 253km Paris-Roubaix, which takes place on April 12th. The more than 52.7km of cobbled roads — which are about 100km into the race — are what define the brutality of Paris-Roubaix. The most crucial section of cobbles is the 2.4km Trouée d’Arenberg at 158km, but there are 27 numbered cobbled sectors to get through including the Mons-en-Pévèle with 49km to go in the race, and the final section of Carrefour de l’Arbre with about 20km to go in the race. Whatever riders remain in contention in the finale will enter the Roubaix velodrome for the last kilometer. One moment of bad luck can ruin Paris-Roubaix, and one well-timed move can mean victory.

The riders selected for Paris-Roubaix include Iljo Keisse, Guillaume Van Keirsbulck, Nikolas Maes, Yves Lampaert, and Matteo Trentin. Niki Terpstra will return to the race as the defending winner, having won out of a solo attack late in the race in 2014. Zdenek Stybar, who was 5th in 2015, also will participate. Stijn Vandenbergh, finishing 16th in the previous edition, has also been selected. This is the same group that participated in Ronde van Vlaanderen last Sunday.

“The moment of winning Paris-Roubaix is still fresh in my mind,” Niki Terpstra said. “I felt really good performing recon today. It was good to feel the cobbles and get a good feeling for Sunday. I think my chances are pretty much the same as they were in the 2014 edition. We have a strong collective, just as last year, who can play several cards. At Paris-Roubaix a moment can change which card can be played. There are a lot of good competitors at this race as well. Alexander Kristoff has been the most successful as of late, but he is far from the only one who can win a race like Paris-Roubaix. Of course the race is also missing riders like Fabian Cancellara, and my teammate Tom Boonen. He’s got great experience in this race. We could really depend on him in the past. He knows the tactics. But also, our Sport Directors have plenty of good experience and success at this race. So we can rely on their knowledge as we always have.  I will ride the same Specialized SL4 Roubaix frame as last year. I’m excited about the opportunity to start on Sunday with the Number 1 on my back, and we will do our best to win this Monument once again.”

“I felt really good today during the recon,” Stybar said. “We rode 75 kilometers and checked out the rest by car. I think everyone was riding pretty comfortably on the cobbles. We have really good materials, which makes the difference on this kind of parcours. I’ve done this race before, but still it is important to get a good look at the course currently. Small details can change over time. And I know people are wondering, but everything is OK for my teeth. They had to completely change the front five teeth, which I lost in the crash at the Eneco Tour. My teeth are now very well glued and brand new, so I really hope I will not have a problem with them any more. As for Sunday, I hope I will improve my results. I’ve been 6th and 5th in my first two participations. It would be nice to aim for the podium, but I think our team arrives at this race with a few riders who can go for the win. Niki, me, Stijn, or Matteo can do something depending on the situation. Let’s hope one of us can win the race on Sunday. We are in good shape as I think we’ve demonstrated with our results so far. For me, the favorite on Sunday is a guy like Wiggins. He is a rider who really has something in his mind and can make it happen. But there are of course other strong guys like Kristoff who will be at the start. Kristoff is in really good shape and in the winning mood. So, it will be hard to beat him, but we must try. But there are still other guys we have to watch, and we also have to see what we can do with our strengths. We are on a good track with the team spirit. As for the weather on Sunday, once in my career I’d love to race Paris-Roubaix in the rain and use my cyclocross skills, but the rain can also be dangerous. You can hit the first section of cobbles in the rain and with a moment of bad luck the race is already over. So, I hope that it will be dry on Sunday even considering my abilities as a cyclocross rider.”

“My nose is OK now, I can breathe good,” Vandenbergh said. “I still have a little bit of pain in my neck from the second crash, but I think I’ll be able to ride normally on Sunday. I’m happy that my bad luck of last week did not affect my ability to start such an important race. I have been feeling really strong, especially at Gent-Wevelgem. I felt good today during the recon and hope my condition is at, or better, than the level it has been throughout the Classics. We have a strong team here and for sure we will do our best to go for the victory.”