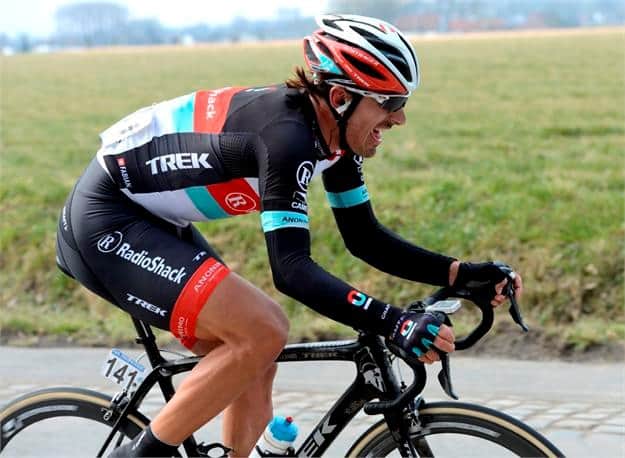 It was an impressive display of power.  One vicious attack on the Paterberg after using the team to perfection put Fabian Cancellara in the winning position as he time trialed to Oudenaarde to claim the win in the Ronde Van Vlaanderen on Sunday.

Fabian: ‘This was an amazing team job.  Everyone was against us and we just stayed focused.  We came on the Oude Kwaremont for the last time and Gregy Rast said everyone looked tired, so I tried to do the first selection there.  Peter (Sagan) and I came up to Roelandts then and I knew I had to go again to get away from Peter.  It happened like we’ve been planning for months.  Hard work from me and the team and sacrificing time with our families.  I can count on two hands the number of days I’ve been home this winter.  It hasn’t been easy for my wife and kids but these are the hard choices we make.  My career won’t last forever so it’s important to pick moments to enjoy.  This victory is for my family and team.  They gave me so much support.  And for the fans ? it was a perfect day.  My second win in Flanders has been exceptional.  I will relax now and recover from this effort and see what happens next week,’ he concluded, referring to Paris-Roubaix next Sunday.

Asked if she will be at Paris-Roubaix next Sunday, wife Stefanie said, ‘He deserves this so much after last year’s misery.  Oh, yes, I will stay until Roubaix now.’

Cancellara attacked on the Oude Kwaremont to soften up the competition, with Peter Sagan on the wheel.  Not wanting to take the sprinter to the line, Cancellara patiently waited for the Paterburg to put the final nail in the coffin, attacking from a seated position on the climb and immediately creating a gap.  From then on it was time trial mode for the four-time world TT champion. Sagan (Cannondale) and Roelandts (Lotto-Belisol) rounded out the podium at well over a minute behind the Swiss champion.

Team director Dirk Demol was in the car, directing Cancellara throughout the day:  ‘We could see in the previous races he was good.  He was working on his condition and always improving.  Everyone was riding hard today and waiting for his attack.   There were comments before the race that RadioShack Leopard Trek would not be one of the strongest teams in the race today but I was laughing at that.  I knew better.  I knew we had the team here to support Fabian and they were ready to die for him.  Between 10km and 5km to go, there was no race information so I pulled up beside him and told him he was going to win the 100th Tour of Flanders.  He’s full of confidence now ? he is the one to beat next week in Roubaix.’

Teamwork was the key ingredient in today’s win with every team rider playing a part in positioning Cancellara for the finale.  One member of the armada was New Zealand’s Hayden Roulston.

Hayden:  ‘This was a super win.  Fabian was able to confirm what everyone thought before the race and that isn’t easy to do when you’re a big favorite.  The team did our maximum and it was great to see Fabian win in that way.  Early in the race we went to the front with our plan to keep everyone together and stay in the front.  We knew we could react better from that place.  It’s such a nice feeling to work so hard and then deliver the win.  It’s good for the riders, the staff, the sponsors and our families.  It’s pretty special.  It’s easy to buy in to the plan when you have a leader like Fabian who can deliver.’
Cancellara won the 2010 Tour of Flanders and wanted to repeat the effort after last year’s race-ending crash in the feed zone took him out of the classics.  Cancellara and RadioShack Leopard Trek have targeted this race since then.

Fabian:  ‘One year ago I was on the ground and now I’m back and I’ve won Flanders on the new course.  It isn’t easy winning as the big favorite but I’m really happy.   In the end it was a strange race, but strange good because I won!  It was so fast in the beginning and we had to take over early but I think that was the key.  There were not so many riders left at the end.  The team did a fantastic job and I did what I had to do:  bring the Ronde Van Vlaanderen home.’

Stijn Devolder, winner in 2008 and 2009, was part of the winning team too, giving his all for leader
Cancellara.’I’m happy to be able to do this today after some bad years.  In the beginning of the race I didn’t feel so good but I’m happy I was able to go on and help the team. The entire team did a super job.’

Team manager Luca Guercilena was bursting with pride at the race’s end:  ‘This is one of the best days of my life.  We led the race for 160km with no fear and used all of our talents to put our star in the perfect position to use his power.  Then Fabian went to work.  I’m really, really happy.  We look now to Roubaix.  We can be at the start with some pressure but confidence too because of our performance today.  This victory is special to us.  We get many comments in the press about our team and we can only answer them with the pedals.  Our new sponsor BPURE came in at just the right moment.  We hope it will be a good sign for the future.’