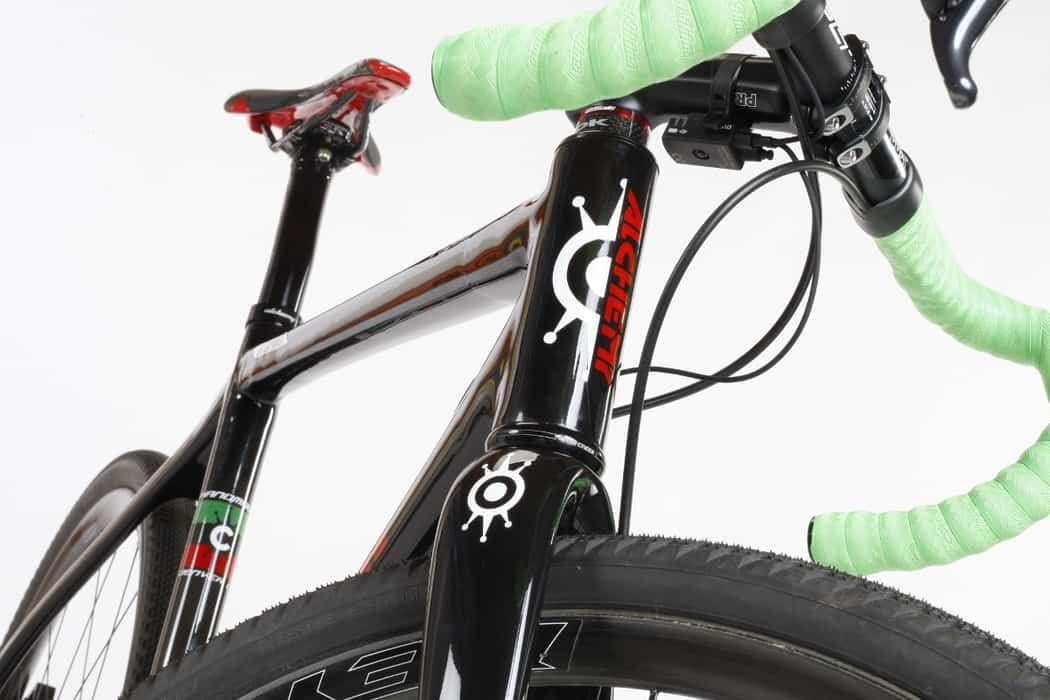 Talk about running things a bit late, it wasn’t until just over a week to go before the start of The Dirty Kanza gravel race that Neil and Zap got their respective race bikes figured out – only about a month later than planned! But, as the old saying goes, better late than never, so here are the two bikes that we’ve spent weeks dreaming about, and days preparing before finally loading them in the sweet Ford van that Neil is driving to Emporia, Kansas. 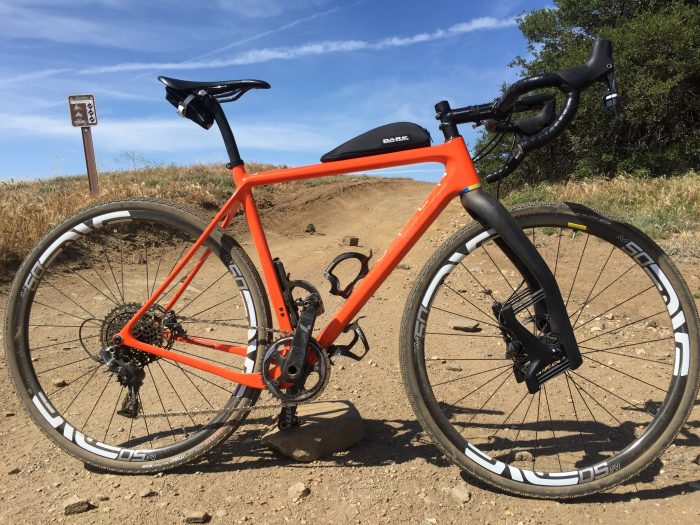 Ever since he first rode the bike back in March, Neil knew that the latest creating from Gerard Vroomen – the Open U.P. was the bike he wanted to ride at Dirty Kanza. And it wasn’t until the Sea Otter Classic in April that we were finally able to secure a bike to call our own.

Neil’s bike is running on a pair of tubeless Enve M50 wheels mounted with 36mm Clement X’Plor MSO tires that are filled to the brim with Orange tire sealant. Additional add-ons include the Jet Roll seat pack, X-Pedo CXR pedals and a Specialized Ronin saddle. The SRAM CX1 drivetrain is comprised of a 42t chainring and 10-42 spread in the rear. To help not getting lost, “RDN” is running a Garmin with a K-Edge mount. 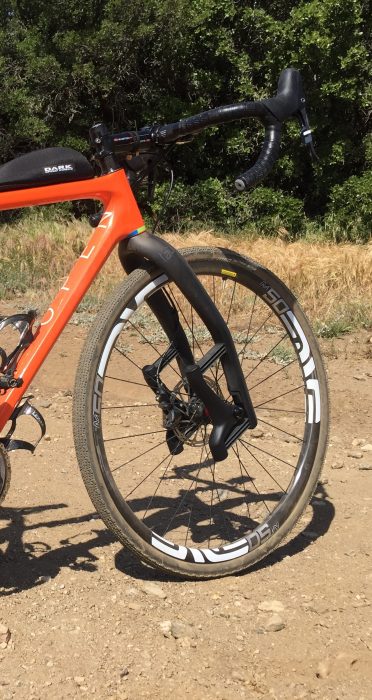 It was also at the Sea Otter Classic that Neil found himself intrigued with the Lauf suspension fork that was on display. As odd looking as the fork is, with 30 mm of travel, Neil thought it would be the perfect tool to help dissipate all the front-end chatter from the braking bumps and pot holes he expected to deal with for his 200 mile adventure. The 900 gram fork sells for $799 and is available for either 12 or 15mm thru-axles. 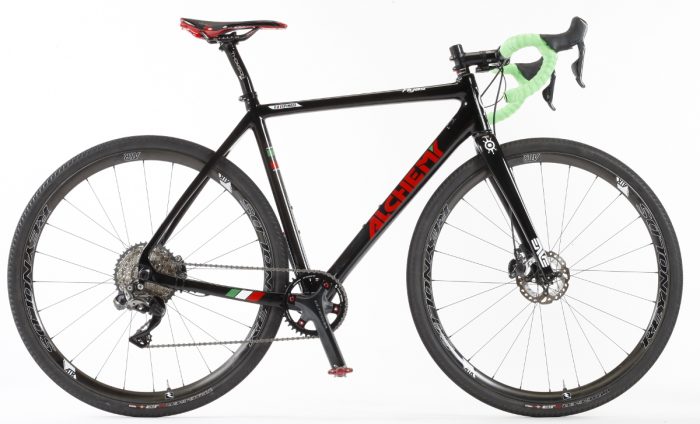 Like Neil, Zap wasn’t able to close the deal on a race bike until the Sea Otter either. Funny thing was that he ended up right where he had originally started – with a made in Denver, Colorado carbon frame from Alchemy Bicycles. While the original plan was to run with a year old Alchemy Aithon, that plan got nix’d when we realized that the frame was neither set-up for Di2 internal cable routing nor thru-axles, both which were the basis for the project bike build to begin with. 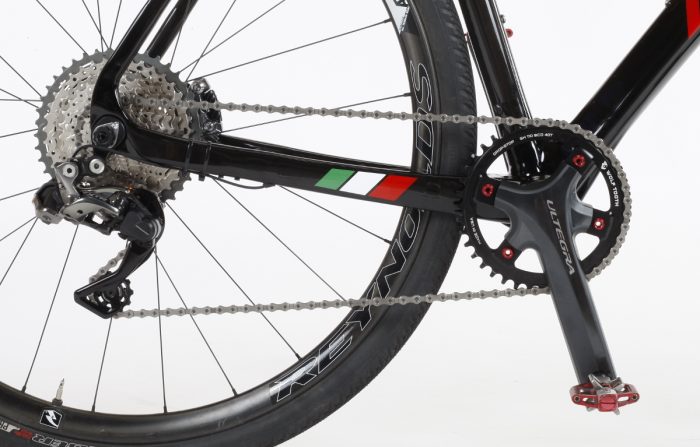 Following last year’s mud-fest at the Dirty Kanza, Zap was sure of one thing, he wanted to run a 1x drivetrain again. Instead of just opting for an off-the-shelf CX-1 SRAM kit, our goal was to make as much of a project out of the bike as possible so we decided to go “Frankenstein” and build our own version of a 1x bike using a variety of Shimano Di2 parts. The big problem however was that Shimano does not market a one-by drivetrain (nor were they much interested in creating one for us), so we hunted down the parts on our own. The Ultegra cranks were mounted with a sweet 40t chainring from Wolf Tooth Components and Zap’s favorite red Candy pedals from Crank Brothers. Out back we ran a Di2 Shimano XTR mountain bike derailleur with its longer cage to grasp the 11x42t spread. 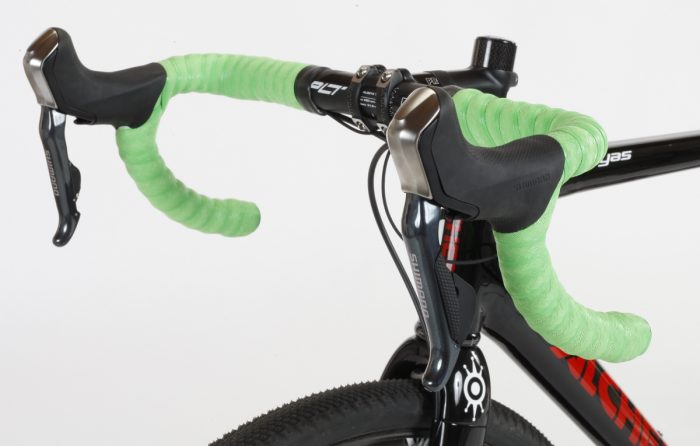 Knowing that anything can happen in the middle of Kansas, and that many top Pro riders still rely on aluminum stem/handlebar combos to avoid potential breakage in a crash, Zap opted for a Vibe 7 handlebar/stem combo from Pro Components. Since Shimano doesn’t make a 1x friendly set of brake lever, unlike SRAM that uses a specific brake lever, the left-side Shimano lever still has shift functions. Since Lizard Skin bar tape is good enough for Nairo Qintana and the Movistar team, Zap decided to run with their 2.5mm  Durasoft Polymer tape that is not only available in 17 colors, but also both tacky to the touch and durable. 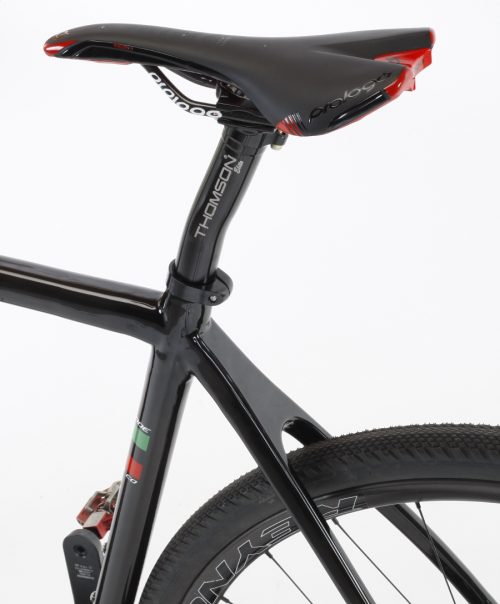 Since the aluminum seatpost from Pro Components was A. ridiculously complex in design, and B. unable to accept a saddle with oversized rails, it go flicked in favor of our good ol’ fashioned USA made post from Thomson. The machined aluminum post with 16mm offset easily accepted the 10mm carbon rails on the ProLogo saddle. And since ProLogo saddles are good enough for the likes of Peter Sagan and Alberto Contador – why not for Dirty Kanza?! 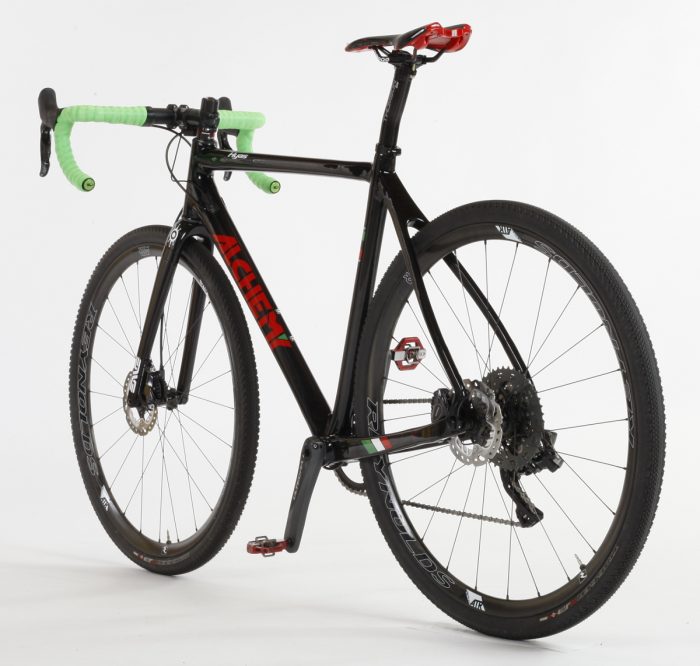 Just as he did last year, Zap decided to roll with 38mm Trigger Pro tires from Specialized that were mounted on a pair of $1550 Reynolds ATR wheels. Shimano flat mount disc brakes with 140mm rotors take care of the stopping duties. The Alchemy Hyas frame sells for $3,999 and can be built-up with a number of component packages that can take the complete price bike (with Shimano Di2) up to $8,999. To help keep track of where he’s going, the Alchemy runs with a Wahoo Elemnt GPS monitor.  As it rolled out the door the Alchemy weighed 19lbs.

Friday will be the first chance we get to test both bikes out on the flint rocks roads that spread out from the center of town, with the race starting at 6:00 am on Saturday. How will it turn out? Stay tuned for our post Kanza report or follow along here.