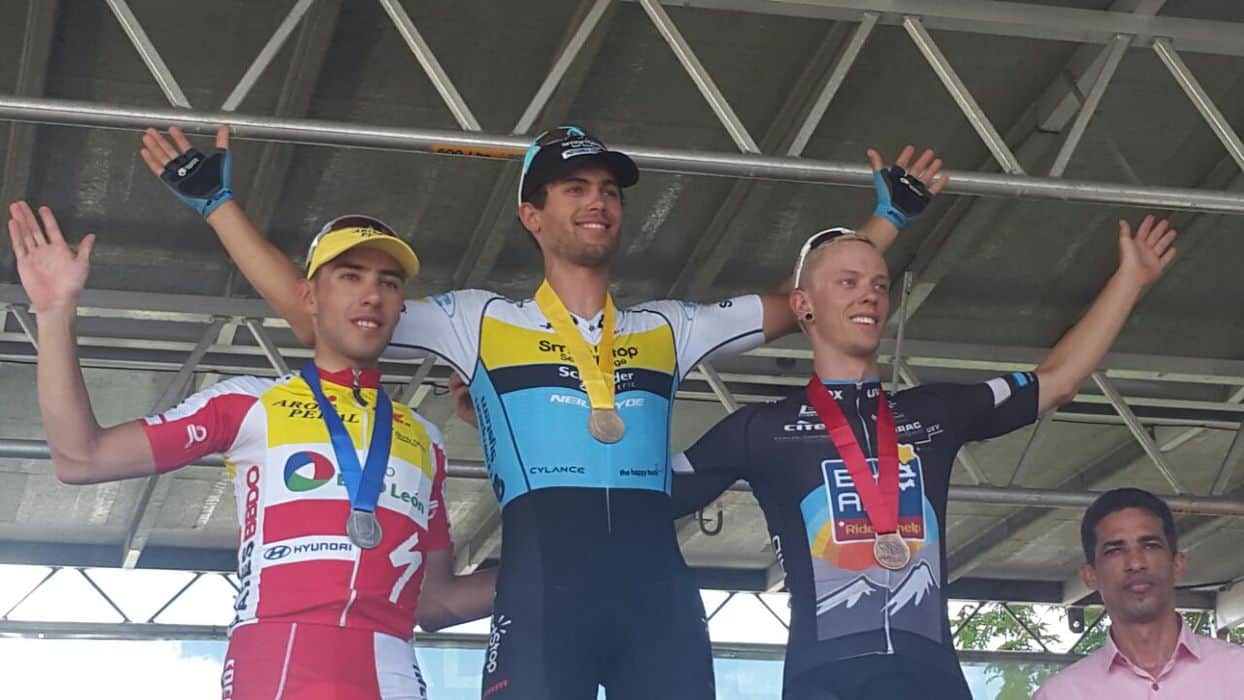 After being devastatingly close on previous stages, Team SmartStop rider Bobby Sweeting has won the final stage of the Vuelta Independencia Nacional in the Dominican Republic.

With a short, flat 84km race made up of 14 circuits of 6km, attacks were imminent and a fast pace holding at around 47km/h throughout the stage. Team SmartStop were active from the start and had the hunger to make something of the stage after the previous days bad luck.

Over halfway through the stage, Evan Huffman was in a two-man break with Team SmartStop on the front covering all the counter attacks coming from the other teams. “I was marking attacks and killing them,” said Sweeting, “I jumped into a group of six and we got a bit of a gap, so I sat on and let them try to chase Evan down.”

The group of six was struggling to bridge the gap so Sweeting stepped in and ramped up the pace. “I decided to take a hard dig and see who would come with. I ended up getting across with two other guys.”

With the group of five now established, Team SmartStop had the numbers and Sweeting was feeling good for the sprint. “At that point we had about four laps to go, so Evan ramped up the pace and did about 90% of the work in the group to ensure it stayed away – that’s the only reason we made it to the line, he was 100% committed.”

With 1km left to race, Huffman hit the front hard, Bobby sitting in fourth wheel. The breakaway group looking for Sweeting to make the first move and at 200m to go he made his winning move.

“Losing the sprint on stage 4 has been on my mind for a few days now and it was eating me alive, so there was no way I was going to let this opportunity go to waste,” he said, “Racing with SmartStop is very different for me. In years passed I would stay in the field and wait, either for the sprint or a defining climb.”

“But we have so many strong riders, anybody on this team can win, and it frees me up to race more aggressively while knowing that if it doesn’t work out we have a whole lot of other ways to win.”

“It’s reassuring for everybody and I think the depth of this roster will be our biggest weapon for 2015.”

It has been a week of ups and downs for Team SmartStop but the guys stepped up on every stage despite what was handed to them the previous day. Sporting Director, Michael Creed is thrilled Sweeting was able to clock his first win with the team after coming so close in earlier stages: “Bobby has fit in instantly and made a big sacrifice in deviating from his normal schedule to come to a race like the DR.  So I’m really happy he got rewarded with his first win for the team and his first for us.”

Team SmartStop has come away from the Vuelta Independencia with two stage wins, Chris Butler finishing third in the overall General Classification, Evan Huffman taking out the King of the Mountain competition and a Team Classification win.

Creed said: “In general I think the guys showed up to the race ready to perform and its a estimate to the level of this team that they guys are still a little disappointed with a few of the results. Hopefully we gain some momentum from this and move it forward.”