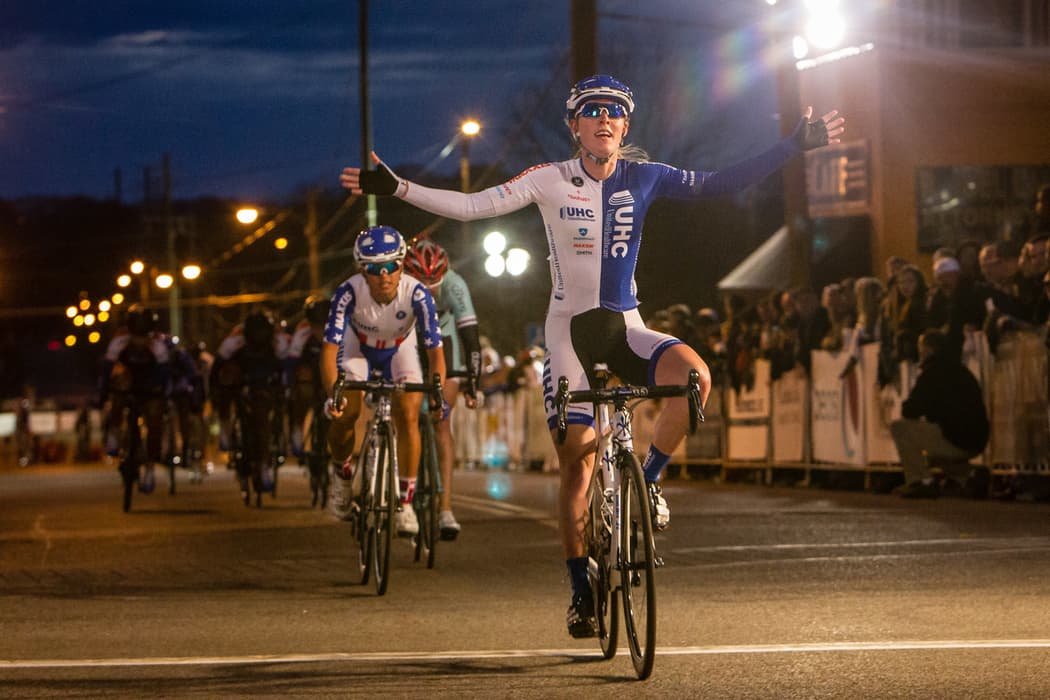 The women of the UnitedHealthcare Pro Cycling Team won in style this past weekend, taking a convincing victory and second place at the Sunny King Criterium in Anniston, Alabama. The women went to Anniston following a week of intense and focused training in preparation for next month’s USA Cycling Professional Criterium and Team Time Trial National Championships.

The women’s team dominated the National Criterium Calendar race. Coming into the last five laps, the Blue Train took command of the race, controlling the front of the peloton. A five-strong lead out delivered Hannah Barnes to the line in first place. Coryn Rivera crossed the line second, pumping her fist in satisfaction at the perfect teamwork.

Said Rachel Heal, Sporting Director, “I couldn’t be happier with how today’s race went, the team rode a near perfect race, taking control when they needed to, and executing a textbook lead out to take 1st and 2nd.”

At Sunny King, the women’s team saw a new addition in the form of Linda Villumsen. Heal added, “Linda slotted in really well in her first race with the team, and it’s great to have Alexis [Ryan] back racing with the team after last year’s injury.”

AS FOR THE MEN
In the men’s race, The UnitedHealthcare Pro Cycling Team put Luke Keough and Hilton Clarke into a winning breakaway that lapped the field. Keough would go on to finish second, with Clark in third place, after a strong team performance on the dark streets of Anniston.

The following day at the Fort McClellan Road Race, the women of the UnitedHealthcare Pro Cycling Team confirmed their fantastic form and strong teamwork with a sweep of the top five positions. Alexis Ryan took the win, with Katie Hall, Linda Villumsen, Hannah Barnes, and Coryn Rivera rounding out the podium, respectively. After the Sunny King Criterium, the UnitedHealthcare Pro Cycling Team has a dominant lead in the team competition of the 2015 National Criterium Calendar. The series continues on April 11 with the Novant Health Invitational Criterium in Charlotte, NC.