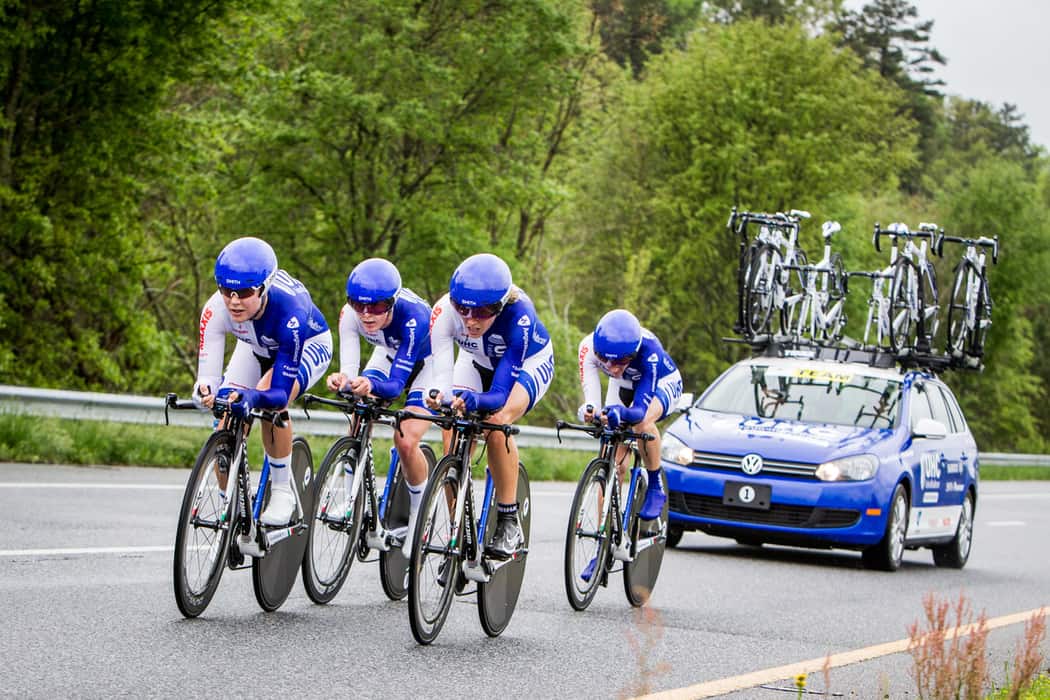 Downtown Greenville, South Carolina was filled with cycling action over the past weekend with the arrival of the USA Cycling Pro Criterium and Team Time Trial Championships. The UnitedHealthcare Pro Cycling Team earned a podium result in the men’s criterium, then rode together to dual podium appearances in the men’s and women’s team time trial events.

In the team time trial, the women of Team UnitedHealthcare crossed the line just 30 seconds down on the winning team after 43 minutes of racing, resulting in a silver medal. General Manager Mike Tamayo commented after the competition, “The women rode a smooth and trouble-free race, reflecting the hard work they have put in to the time trial discipline. We are making progress towards the World Championships later in the year.”  The World Championships will be held in Richmond, Virginia on September 19, 2015, giving many of the riders a once-in-a-career opportunity to race a World Championship on home soil with their teammates. The men put forth a strong effort and came across the line in third place in the team time trial, earning another medal for the team.

The UnitedHealthcare Pro Cycling Team lined up as the defending champions in the USA Cycling Pro Criterium Championship on Saturday with hopes of keeping both stars and stripes jerseys within the team. Unfortunately, defending champion Coryn Rivera was involved in a crash with several other riders in the final corner of the women’s criterium. Most importantly, all riders walked away from the crash without significant injury. The 90-minute event on a compact circuit around Greenville’s beautiful downtown area had been tightly controlled by the UnitedHealthcare Blue Train for the majority of the race until the crash removed the riders from contention.

In the men’s criterium, the pack was shattered by fast and ferocious racing from the outset. The field was whittled down to just 17 riders coming through the bell lap. The UnitedHealthcare Pro Cycling Team was well-represented with four riders in the lead pack. Through the last two turns, Eric Marcotte of Team Smartstop launched an unmatched move to take the win, followed by Luke Keough with a podium performance for the UnitedHealthcare Pro Cycling Team in third place. Mike Tamayo congratulated Team SmartStop after the race, “It’s great to have such strong competition on home soil, elevating the level of racing in the US. We congratulate the winning teams and riders on their accomplishments here in Greenville. ”