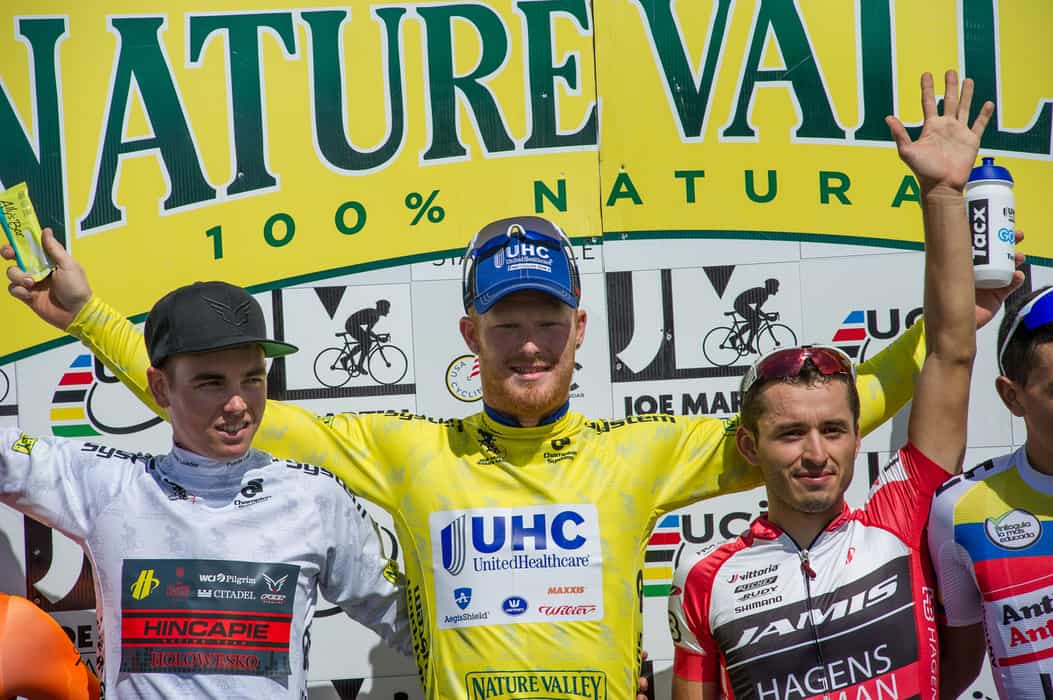 The UnitedHealthcare Pro Cycling Team completed the 2015 Joe Martin Stage Race in spectacular fashion on Sunday. Scotti Wilborne and Ruth Winder won stage 4 from a breakaway, followed by Coryn Rivera and Alexis Ryan in 3rd and 4th, resulting in the overall team classification victory. In the men’s race, John Murphy took third on the stage and seized the overall race victory along with the sprint leader’s green jersey.

The women lined up for 50 minutes of criterium racing on a technical 1-mile course through downtown Fayetteville, Arkansas to conclude the 4-day Joe Martin Stage Race. The famously brutal criterium course featured a stiff climb through the finish line on each lap. On the fourth consecutive day of racing, the riders were sure to feel the elevation gain with each lap. Two laps into the race, the team sent powerhouse riders Cari Higgins and Rushlee Buchanan to the front of the race to lift the pace push their competitors to the limit, setting up Scotti Wilborne and Ruth Winder for an attack. Wilborne and Winder made their move and quickly built an advantage of 15 seconds on the charging teams.

Showing great strength and stamina, Scotti Wilborne and Ruth Winder lowered their heads and powered through the remaining laps, holding off the peloton and taking 1st and 2nd on the stage, respectively. In the sprint for the final podium position, the remaining women of the UnitedHealthcare Pro Cycling Team performed another flawless lead out train, with Alexis Ryan setting Coryn Rivera up to sprint for her second victory and third podium result in a row, with Ryan finishing just behind in 4th. The consistently impressive riding from the team earned the overall sprint leader’s green jersey for Coryn Rivera, the overall best young rider’s white jersey and 5th overall for Ruth Winder, 2nd overall for Scotti Wilborne,  and the overall team classification for the women of the UnitedHealthcare Pro Cycling Team. Sporting Director Rachel Heal commented on the incredible week of racing, “We came out swinging today, and made a real race of it. Although we couldn’t quite make up the time needed to clinch the overall, to come away with 1, 2, 3 and 4 on the stage as well as 2nd and 5th overall, green sprinter’s jersey, white young rider’s jersey and best team is a pretty good days work!”

The men raced the same brutal course for 85 minutes later in the day. With John Murphy within striking distance of the overall classification after stage 3, the team knew that they had a chance at taking a time bonus and catapulting Murphy into the yellow jersey. With two sprint victories already achieved during the week and top form earned from a full early season of European racing, the UnitedHealthcare Pro Cycling Team aimed to control the race as much as possible, and ensure a sprint for Murphy at the end of the 85 minutes of racing. A group of 4 riders attacked mid-race, causing the UnitedHealthcare Pro Cycling Team to assemble at the front to chase the group down.