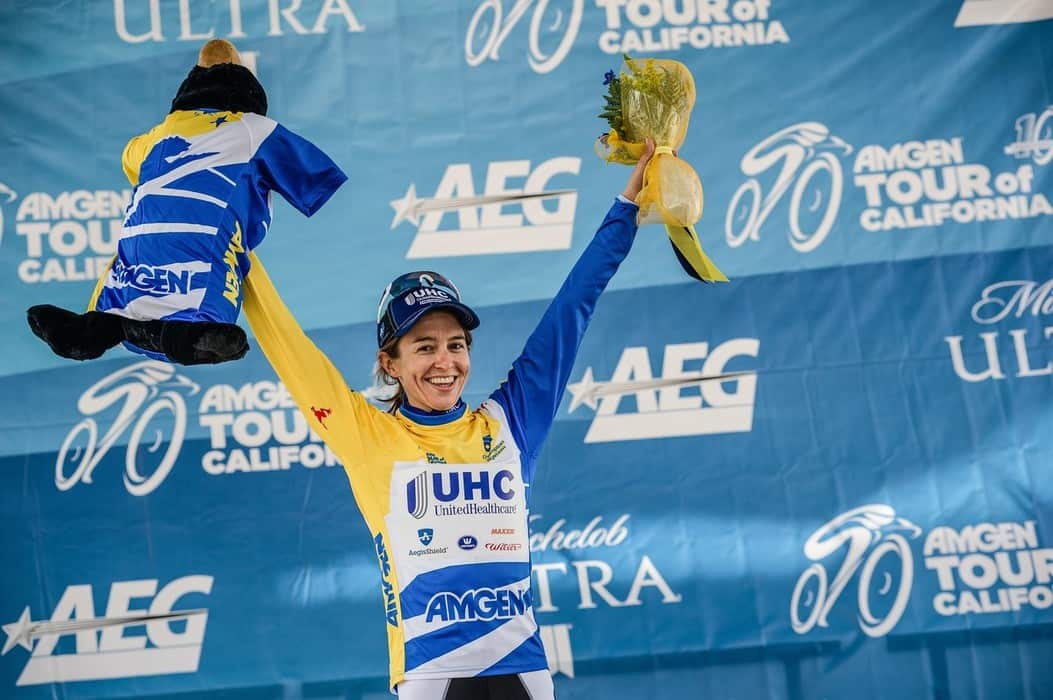 Late attack by Hall seals the victory in South Lake Tahoe.
Katie Hall and the UnitedHealthcare Pro Cycling Team won the opening stage of the Amgen Tour of California Women’s Race, taking the leader’s jersey in the process. The 75-mile road race took in over 5,300 feet of climbing on a hilly route through the Sierra Nevada mountains. With two Queen of the Mountain competitions available on the day, the racing started aggressively. A two-rider breakaway went clear early in the race and looked set to disrupt the proceeding, but the peloton slowly reeled the escapees in on the final 15-mile climb.

With just over 4 miles of racing left, a dangerous eight-rider breakaway went clear from the field, with the UnitedHealthcare Pro Cycling Team represented by Hannah Barnes. Fresh off her stage win at Tour of the Gila, the opposing teams weren’t willing to let Barnes come to the line first. This played to the UnitedHealthcare Blue Train’s advantage, as the climbers came to the fore on the steep pitch to the finish line.

The lead group was reduced quickly by the increasing speeds, but Katie Hall stayed with the leaders on the way up to Heavenly Mountain Resort. With 300 meters of racing to the finish, Hall put in a blistering attack that shattered the small group and propelled her across the line for victory.

Rachel Heal was delighted with the opening stage win, “This is a fantastic way to start the tour! We knew going into the stage that Katie had the legs to contest the win, but to pull it off against such a quality international field, shows real tactical savvy as well as great form.”

Hall showed her great form earlier in the year with a stage win at the the Tour Femenino de San Luis, then again during the Tour of the Gila last week where she finished 2nd on the final stage as well as in the overall classification, beating a huge pool of talented climbers in the process. Heal continued, “The whole team worked together perfectly, putting riders at the front when it mattered, and setting Katie up for the biggest win of her career.”

In addition to Hall’s victory, UnitedHealthcare Pro Cycling Team rider Linda Villumsen finished 12th, with teammate Hannah Barnes in 13th. As the fastest Under-23 rider in the field, Barnes will wear the White Best Young Rider Jersey for tomorrow’s stage.

WHAT’S NEXT?
Stage 2 of the Amgen Tour of California Women’s Race is a 50-mile circuit on the shores of South Lake Tahoe. Once again starting and finishing at the Heavenly Mountain Resort, the crowd-friendly race will give spectators the chance to see the race up to three times on each 25-mile lap. Queen of the Mountain points will be available on the switchbacks of Apache Avenue, before a steep finish at the base of Heavenly Ski Area.