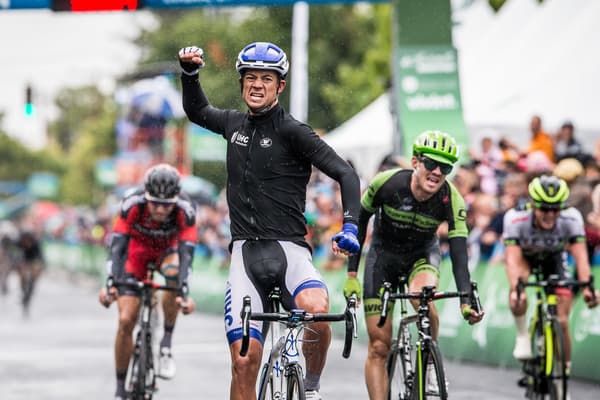 Press Release
The UnitedHealthcare Pro Cycling team opened the 2015 Tour of Utah in style as Kiel Reijnen sprinted to victory on stage 1. The Boulder, CO based rider took the initiative to form a late stage breakaway that held off a charging peloton on the streets of downtown Logan, out-sprinting his competitors to claim the Yellow Jersey.

Reijnen was elated with his stage win, “I wasn’t sure how my legs would react to the cold, so I waited as long as I could to launch my sprint. We got to 180 meters to go and I went for it.” Reijnen held off fellow Boulder-based riders Alex Howes and Taylor Phinney in a three way sprint to the line. Reijnen quickly poured praise on his teammates for the work throughout the day, “It was super teamwork today. The guys pulled their hearts out to bring the break back. A win like that is never a sure thing, but our team is strong enough to make it work.”

UnitedHealthcare Pro cycling team General Manager Mike Tamayo was equally pleased, “We decided to come into Utah with a clear plan and to accept responsibility if we had to.  We knew we could win a sprint.  So we rode all day with other teams helping from time to time.  When the breakaway was at 15 minutes we got nervous.  But the boys rode well and Kiel delivered the win. We are proud to have the yellow jersey in such a prestigious race.  We will do it proud.”

The rain soaked stage started early on Monday with a sedate roll out from Logan, but before long a series of breakaways tried to establish themselves at the head of the race. After 50 km of racing, and approaching the first KOM of the day at Bear Lake, a small group had established a large lead on the main pack, as the unrelenting rain pounded the peloton.
The UnitedHealthcare riders, distinct in their all-black rain jackets, bided their time in the pack, content for the break to stretch its lead before the return to Logan. The team’s stated goal of the day was to ride for the sprinter John Murphy, and as the race progressed, the familiar blue and white kits came to the fore. After a short lull in the weather, the team began to chase, and soon the gap to the breakaway dwindled. With downtown Logan in sight, and the rain once again falling hard, the breakaway began to tire, and eventually were in sight of the main pack.

Reijnen, whose job was to patrol the front of the pack for last minute attacks, used the long sustained climb through the Boulevards Neighborhood to bridge across to the two remaining breakaway riders, and was then joined by Alex Howes and Taylor Phinney. The Boulder-based trio formed a brief allegiance that succeeded in holding off the baying pack. With little more than 10 seconds between the five riders and the hard charging main field, every rider had to work hard to maintain their advantage. In a stage that was billed as a sprint friendly finish, the sprint came from a smaller group than expected. With Taylor Phinney putting in a large dig on the front with one corner remaining, Reijnen used the last corner as a slingshot onto the front. He launched his sprint just a moment before Howes, and had a bike length cushion as he sailed across the line.

The visibly emotional Reijnen pounded his chest and pointed to the UnitedHealthcare logo on his jacket as he crossed the line, obviously ecstatic to take the opening stage victory, and along with it the Leader’s Jersey for the 2015 Larry H. Miller Tour of Utah.

The Tour of Utah continues Tuesday with stage two: a 100 mile route from Tremonton, taking in 4,630 feet of climbing via Ogden Canyon to finish in downtown Ogden. The KOM points at the summit of Ogden Canyon at will give the GC contenders a chance to stretch their legs, before a 10 mile run in to the finish on a compact loop in down town Ogden. With the Yellow Jersey on the shoulders of Reijnen, the team will be looking to keep the race leader safe, while racking up more stage wins on the way to the finish in six days time. For Reijnen, the green jersey is a realistic goal moving forward, and he hopes to be in contention in the sprints in the coming days.

The UnitedHealthcare women’s team sneaked onto the podium Monday with Villumsen in third place. The downtown Logan circuit used the same roads as the finale of the men’s race, including the steep climb through the Boulevard Neighborhood. It was on this climb that a break moved away from the field with 30 minutes remaining, with Villumsen representing the UHC team. With no organized chase coming from other teams, the break remained away from the pack until the end of the race, with Ally Dragoo putting in a solo effort to take the win. Linda Villumsen took the sprint for third place. The women’s team will race stage two around the streets of Ogden today, with the aim of pulling off the stage win.

Taylor Phinney Through The Years