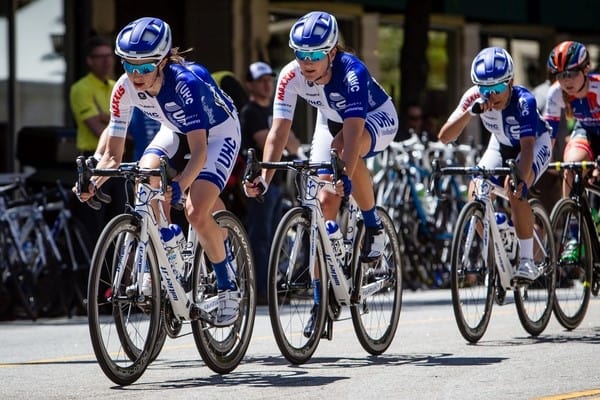 Press Release
Lauren Tamayo of the UnitedHealthcare Pro Cycling Team stormed to a solo victory at the 2016 USA Cycling Professional Criterium National Championships in Greenville, South Carolina on Sunday afternoon. The 15-year veteran of the women’s professional peloton took the field by surprise in a late move, vindicating years of hard work in pursuit of her own results as well as those of her teammates.

After receiving the hallowed Stars and Stripes jersey in front of a packed crowd, Tamayo announced that the 2016 season would be her last in the pro ranks, “I started the season thinking I’m ready to take on new endeavors, but I never imagined I would end my career wearing the stars and stripes of the US national champion.”

After a narrow loss in the previous day’s team time trial, the women of the UnitedHealthcare Pro Cycling Team came to the start line of the criterium with huge motivation to take the top step. The race was fast from the gun. The DNA-Visit Dallas team animated the racing, putting the Blue Train on the back foot. With patience and experience, the women monitored each move, ensuring no large breakaways could get up the road and out of sight on the tight corners of the Greenville loop. With four laps remaining, Tamayo jumped from the pack into a select three-person group. Tamayo explained the racing, “Typically, my role is to contribute to the success of one of my teammates, but when I found myself in the group of three with just a few laps to go and a stable advantage, I had to shift my mindset and figure out a way to win for the team. I jumped early and created a gap going into the final two turns.”

The pack gave the break just enough breathing room that it became obvious the move would stay clear. With Rivera at the front of the pack, the UnitedHealthcare Pro Cycling Team had all bases covered, and Tamayo could avoid doing too much work at the front. Timing her attack perfectly, Tamayo dove into the penultimate corner, carrying enough speed to maintain her gap and sail across the line with room to spare.

Tamayo was pleased that the victory can be shared will her hardworking teammates, “I’m ecstatic to share this national title with the UnitedHealthcare Pro Cycling Team, a program I’m proud of and have been a part of since its inception. I’m looking forward to wearing red, white, and blue for the remainder of my final season with the UnitedHealthcare Blue Train. My teammates and staff were all amazing today, I’m very pleased to come home with the win.”

Sporting Director Rachel Heal was elated with the win, “Lauren works tirelessly week in, week out to help deliver our sprinters to victory, so it’s pretty special to see her take the win and the Stars and Stripes jersey.”

THE UPS & DOWNS FOR MURPHY
When John Murphy hit the ground in the Men’s Professional Criterium, the Blue Train did not give up on the race, but instead regrouped and got on with the job at hand. With jersey flapping and skin torn, Murphy reentered the race with the help of his UnitedHealthcare Pro Cycling Teammates, and fought valiantly to the end. Faced with a hugely talented team from Rally Cycling, the North Carolina based Murphy has to settle for second on the day, as Brad Huff crossed the line almost a bike length clear of the field.

Speaking after the race, an obviously disappointed Mike Tamayo was full of praise for the Rally Cycling team, “Brad Huff was faster today. That’s bike racing. The boys rode a tactically perfect race, and I can’t fault them for that. We’re excited to see such strong racing on the domestic scene, and it will only give our squad more motivation for the upcoming criteriums this season.”
Although bruised and sore, Murphy walked away from the crash with no serious injuries and will be back in action at the upcoming Joe Martin Stage Race in just a couple of weeks.