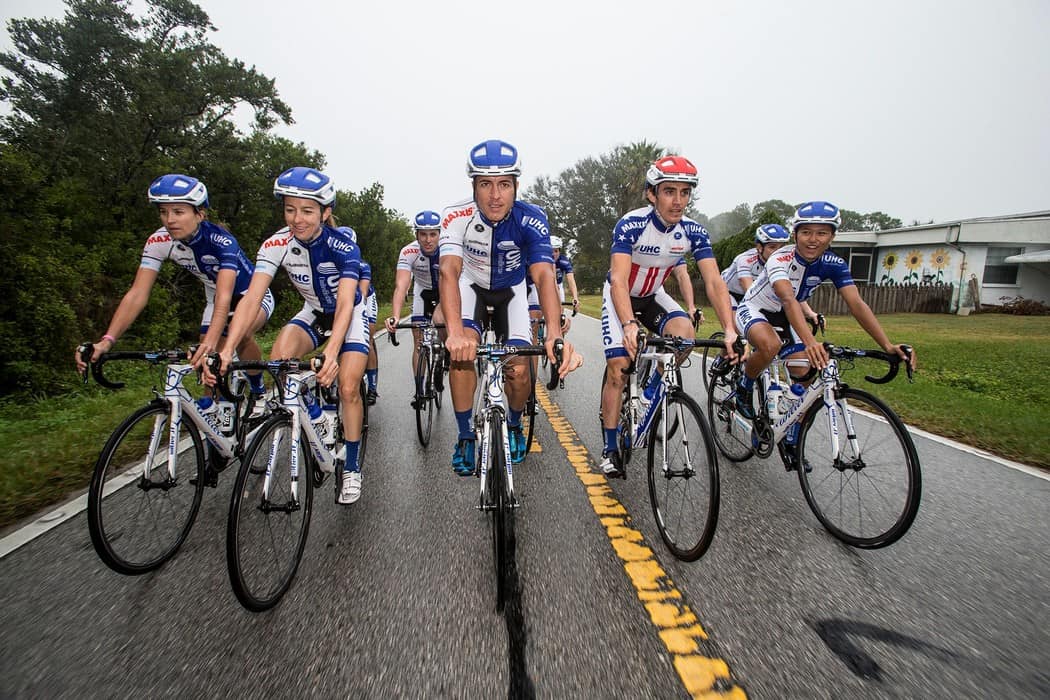 Press Release
The UnitedHealthcare Pro Cycling Team gathered in Palm Harbor, Florida last week for their annual team presentation and sponsor summit, where new riders and new sponsors are welcomed into the program by those continuing on with the team from previous years.

The UnitedHealthcare Pro Cycling Team is aiming to build on the fantastic past few seasons, creating new success in 2016. Sponsors, long time supporters, riders, and staff came together for the celebration at the Innisbrook Golf and Spa Resort in Palm Harbor, where the audience was treated to one-on-one interviews with riders and directors, as the team reflected on the history of the program and laid out its plans for the season to come.

Thierry Attias, owner and president of Momentum Sports Group spoke of the team’s philosophy in choosing its roster for the coming season, “Here at Momentum Sports Group and the UnitedHealthcare Pro Cycling Team, we don’t merely focus on selecting the fastest riders. We select the highest quality and hardest working individuals. Over the last several years, that strategy has paid off for this program, and what we’ve learned is that those quality, hard-working people end up being the fastest riders, too. We’re proud of the family we’ve created here, and we’re all looking forward to a hugely successful season representing UnitedHealthcare on the race course and in communities around the country and the world.” 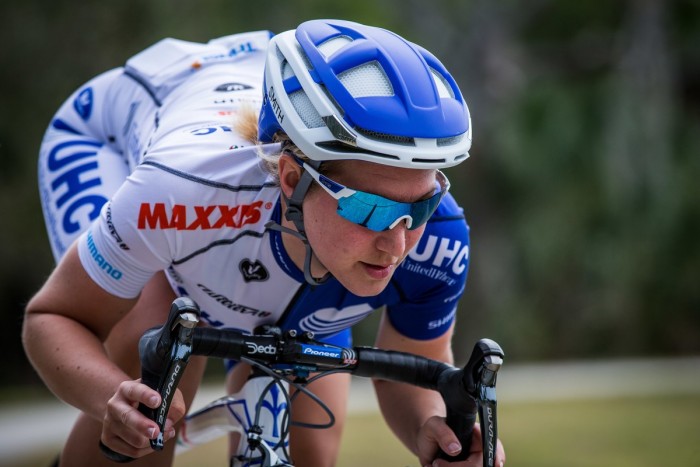 Talented young rider Coryn Rivera returns to the UnitedHealthcare Pro Cycling Blue Train after taking numerous sprint victories throughout 2015, including a stage three win and the sprinter’s green jersey at the USA Pro Challenge, earning a spot on the 2015 World Championship road race roster where she impressed the world with an outstanding performance. Katie Hall started her season with aplomb, winning the opening race of the year, the Tour Femenino de San Luis. Her great form at the beginning of 2016 builds on her fantastic 2015 results, where she took 2nd overall the Tour of the Gila, followed by a high-profile win in the opening stage of the Women’s Amgen Tour of California. Best Young Rider at the 2015 USA Pro Challenge, Abby Mickey, and now 3-way New Zealand national champion (Road, TT, and Criterium) Rushlee Buchanan return to their posts on the squad, along with 2015 World time trial champion Linda Villumsen and Canadian track, road, and time trial star, Laura Brown.

The women welcome five new riders for the 2016 season: Annie Ewart, Diana Carolina Peñuela, Hayley Simmonds, Iris Slappendel, and Para-athlete Shawn Morelli. All-rounder and former 2-time junior Canadian National champion Annie Ewart said, “I could not be happier to join the UnitedHealthcare Pro Cycling Team for the 2016 season. I hope to contribute and build on the incredible success this team has had the last few seasons.” Current British national time trial champion Hayley Simmonds brings more power to the team for 2016, commenting, “I am incredibly excited about starting my professional cycling career with UnitedHealthcare Pro Cycling Team. The team will provide me with the perfect environment in which to develop further as I make the move to full-time rider.” 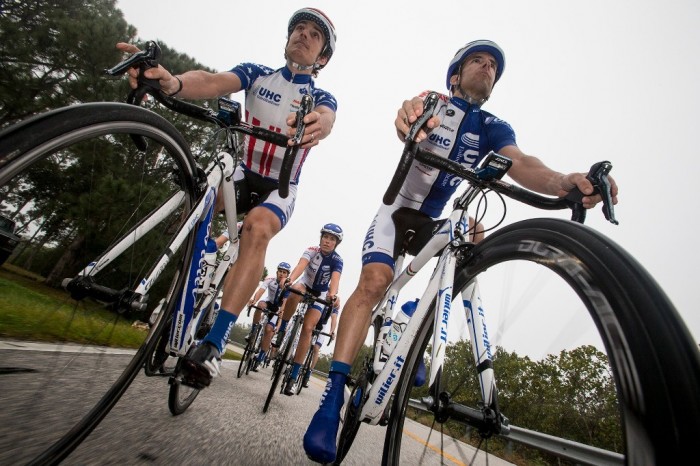 The 2016 UnitedHealthcare Pro Cycling Team retains some familiar male faces from 2015, and also adds fresh faces to the mix. Sprinters and criterium specialists Karl Menzies, Brad White, Luke Keough, and Adrian Hegyvary will return to lead the Blue Train in domestic criteriums and road races abroad. Fresh off of an impressive World championship road race performance for Team Colombia, Carlos Alzate returns to the team with his blazing fast and highly versatile sprinting abilities. Another versatile fast finisher, Italian Marco Canola, joined the squad in 2015 and returns in 2016 after a great season in blue and white. Stage race team captain Jonny Clarke brings his breakout climbing talent back to the squad after taking 4th in the stage 4 mountaintop finish at the 2015 USA Pro Challenge. John Murphy, who once again showed his bunch sprint capabilities with a resounding victory on the final stage of the USA Pro Challenge, will also return in the blue and white of the UnitedHealthcare Blue Train. Dedicated all-rounders Danny Summerhill and Chris Jones have been mainstays on the roster for years, and will again lend their talents in 2016.

The UnitedHealthcare Pro Cycling Team welcomes current United States National road champion Matthew Busche to the ranks for 2016, a well-rounded and accomplished rider with broad experience at the highest level of the sport. Busche is joined by young standout Daniel Eaton from the Axeon Cycling Team, the current U23 American National champion in the individual time trial discipline who went on to claim 10th in the U23 World championship individual time trial. Eaton commented, “I am beyond excited and honored to have signed with such a prestigious program as the UnitedHealthcare Pro Cycling Team for 2016 and 2017. I hope over the next two seasons I can live up to the incredible opportunity I have been given.” Young sprinting phenom Ty Magner joins the bolstered squad for the 2016, along with experience climber and GC specialist Daniel Jaramillo.

Sporting Director Rachel Heal laid out the season plans for the women’s team, “After a strong showing in 2015, we’re looking to continue the success and carry this momentum into 2016. We will increase our schedule in Europe for 2016, but with two Women’s World Tour races (The Women’s Amgen Tour of California and Philadelphia Cycling Classic) and several more UCI races in the US, we will be looking to perform well on home soil throughout the year.”

Mike Tamayo, General Manager of the UnitedHealthcare Pro Cycling Team was also upbeat about the men’s team prospects, as the UnitedHealthcare Blue Train aims to defend its reputation as the strongest domestic team in the United States, “The UnitedHealthcare Pro Cycling Team 2016 roster is exciting for this program. We have brought some more youth and drive into the team– riders with a ‘go get ‘em’ mentality. Having a National champion in Busche is rewarding to start with, while also not forgetting that we have Eaton as the U23 National time trial champ. Within this roster, we have very specific roles and goals for our schedule. We will have a heavy international and domestic calendar with many opportunities for success.”

The UnitedHealthcare Pro Cycling Team credits their success, results, and momentum not only to talented riders, dedicated staff, and passionate fans but also the generous partners that help make the team a reality each season. UnitedHealthcare, the largest single health services and benefits provider in the United States, continues their dedication to inspiring people to bike their way to better health, by returning as the title sponsor of the team for the seventh consecutive year.

The program will again trust their power technology needs to Pioneer Electronics, and the riders will be protected by helmet and eyewear provider SMITH. Tacx returns to the program to provide category-leading trainers, bottles, and cages. The team will proudly wear Vermarc on-bike racing and training apparel, with Swiftwick socks and RockTape kinesiology tape.

The riders will be fueled by GQ-6 products and Ally’s Bar for all of their on-bike hydration and nutritional needs. For their countless hours and miles on the road, the team continues to trust Chamois Butt’r products. Human Resources solutions company TriNet joins the program for 2016, lending their support and expertise. FASTER continues to provide their unparalleled wind tunnel resources to the team, completing the 2016 program.