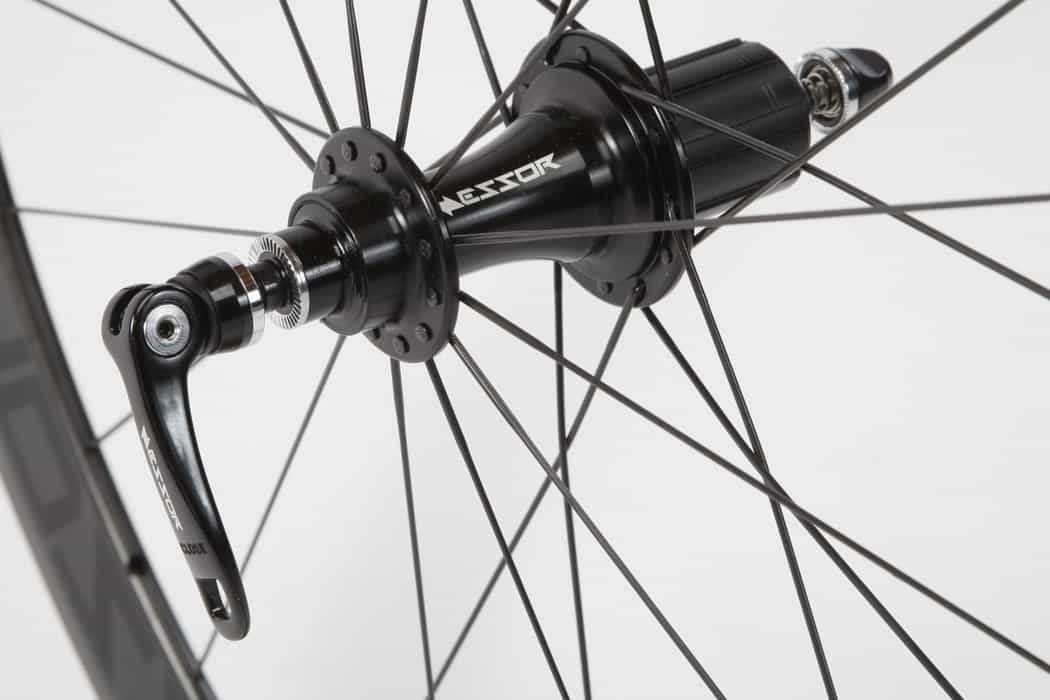 Essor wheels are brought to you by the same folks who run VeloVie and State Bicycles, and they’ve earned a reputation for offering high-performance products at low prices. In addition to a tri-spoke wheel, Essor offers a three-strong line of carbon clinchers with depths of 32mm, 46mm and 66mm. Today we’re taking a look at the mid-depth option, the Rush.

THE TECH
Underneath the Rush’s sleek and stylish graphics is a carbon clincher rim that we’ve ridden in the past. Like a handful of other wheel companies, Essor sourced a popular model from Reynolds—in this case, the rim used for an older generation of the Reynolds Assault—and built it up using a proprietary hub and unique spoke conﬁguration. The rim measures 46mm deep and 21.6mm wide at the brake track with an internal width of 17mm. Its proﬁle is a classic V-shape that was seen as an industry standard before the new era of rims with wider and blunter proﬁles emerged.

Essor’s simple hubs make for clean aesthetics while helping to keep the weight down. The Rush wheels come with a set of rebadged, Reynolds signature-blue, carbon-speciﬁc brake pads and quick-release skewers, and customers have the option of selecting from any of nine decal colors for a bit of personalization. THE RIDE
The Rush clinchers are plenty stiff for low- to medium-weight riders, and accelerate faster than some other comparable wheels we’ve ridden, but don’t have that quick, snappy feeling we’ve experienced from shallower carbon clinchers. Their best attribute is maintaining a quick, steady straight-line pace once up to speed. Their overall stiffness makes them descend well with a solid feeling underneath the bike, and they shouldn’t trouble anyone in the handling department in calm conditions. When the wind picked up, however, our lighter test riders noticed a lack in stability.

Road comfort is right on par with comparable carbon clinchers, meaning that they’re a touch harsher than shallow aluminum clinchers, but this shouldn’t curtail anyone from taking them on a long ride, as they roll smoothly thanks to Essor’s minimalistic hubs.

THE VERDICT
The Rush’s rims have been on the market in various forms for several years, and they’ve proven to be a great choice for most riders in almost any condition. Newer rim designs boast wider proﬁles for even greater claimed aero advantages and better handling, but the Rush remains anything but obsolete.

For the price, the Rush wheels provide tremendous value. Essor also offers an optional crash-replacement insurance policy for $79; they’ll sell you a new set of wheels at 50 percent off in the event of damage not covered by their two-year manufacturer’s warranty. PUNCH LINES
• Dated, but a tried and true design
• 9 decal colors to choose from
• A lot of wheel for the money

Checkout their wheels at essorusa.com