TESTED: How Much Data Is Too Much? 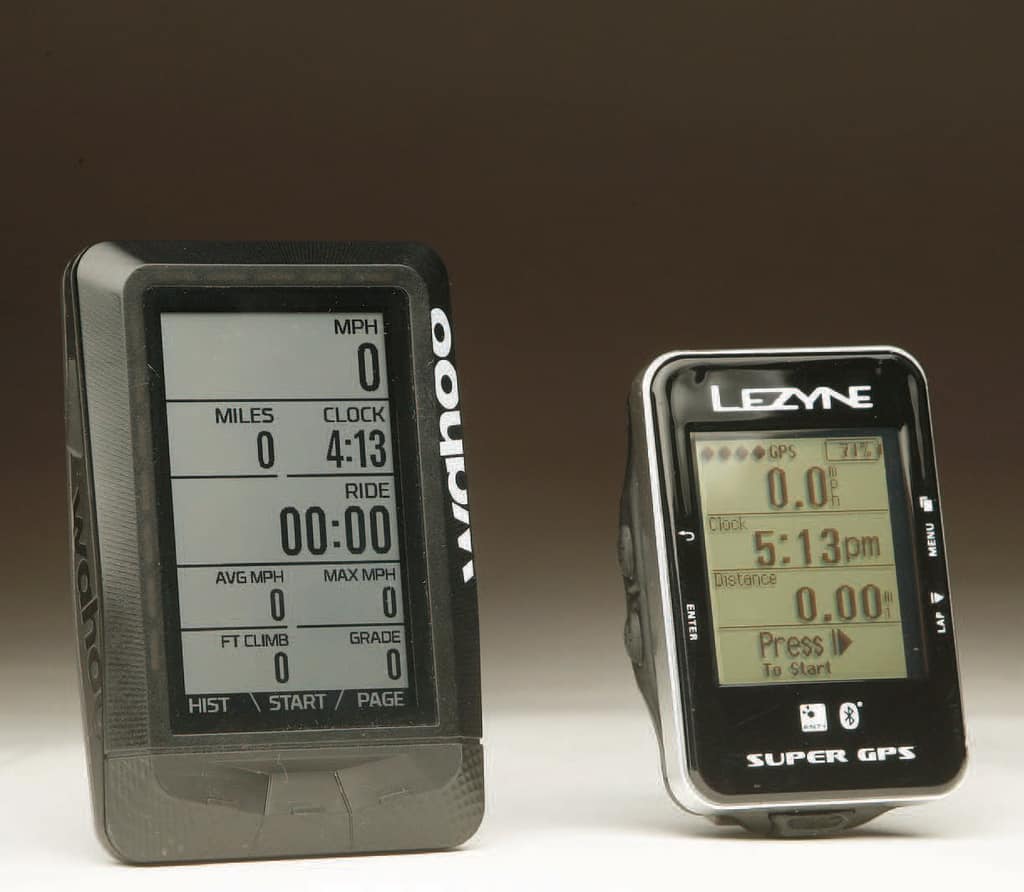 If you are one of the data-driven cyclists out there who wants a cycling computer to track, navigate and analyze your ride, then you’ll be happy to know there are now more options than ever before. Two of the newest entrants come into the market with vastly different ideas. The Lezyne Super GPS targets simplicity and price, while Wahoo gives their new ELEMNT all the bells and whistles one could hope for.

LEZYNE SUPER GPS
Lezyne’s background is as an accessories brand that makes some of the premium multi-tools and pumps on the market. The company’s first foray with batteries and circuit boards began a few years back with front and rear lights, and now Lezyne is taking the plunge into the computer world.

THE TECH
Three devices make up Lezyne’s GPS line—the Mini, Power, and Super. The $139 Mini is made for those who want a small, inexpensive unit and don’t care about phone or device connectability since it doesn’t feature Bluetooth or ANT+. The $169 Power and $199 Super both share the same 46.5mm (W) x 73.2mm (L) x 27mm (H) dimensions, but differ when it comes to what’s on the inside. The Power features Bluetooth Smart connectability, but not ANT+, whereas the Super has both, allowing it to pair with Android or iOS smartphones, in addition to any cadence, heart rate or power meter devices. All three of the GPS units use what Lezyne calls the X-Lock mount system that is unique to them and isn’t compatible with the more common Garmin mounts.

The Super is sleek-looking, with a very clear display that’s held in place with a machined-aluminum bezel. We’ve had problems being able to read screens in the past if the angle wasn’t quite right with the sun, but the Super has no such issue. Instead of using a touchscreen, all the functions are controlled by four buttons, two on each side. Those functions are much simpler, or limited, depending on what you’re looking for, than what other devices offer. There is only a single screen that is semi-customizable between two and four rows of data fields. The top row is permanently set to show current speed, while the rows below are customizable, with the bottom row allowing for any number of data fields that can be toggled through using the menu button.If you like to have a lot of data at your fingertips during the ride, then you might find the format underwhelming compared to devices with multiple screen options.

If you like to have a lot of data at your fingertips during the ride, then you might find the format underwhelming compared to devices with multiple screen options. Even though it’s entirely unnecessary to use the Super GPS in conjunction with your phone, doing so allows phone calls, e-mails and text notifications to pop up on the screen, but if you don’t care to have such features, they can be turned off. Lezyne also created the GPS Ally phone app and GPS Root website where you can analyze your ride and/or send the .fit file to Strava or Training Peaks.

THE RIDE
Since the Super GPS doesn’t have multiple pages of metrics that you need to organize, the initial setup process is relatively quick. Pairing it with heart rate and power took just a couple pushes of a button and—voila!—we were connected with our heart rate strap and Quarq power meter. The Super GPS comes with just the stem mount, which, due to the X-lock design, sits quite high up. After we tried the $17 aftermarket Forward Mount, its height was no longer an aesthetic issue. Once in use we didn’t experience a single glitch or corrupted file in the dozens of rides we used it on, though after being spoiled with so many data fields easily available on the ELEMNT, we did find ourselves wishing that there were multiple pages that could be customized to our needs. Upon finishing the ride, we could upload the file directly to our home computer via the micro-USB cable that also acts as the charging cable, but typically we would just do it wirelessly through the GPS Ally app. From the app we had Auto Upload turned on so that the ride would go directly to Strava. Battery life is one of the unit’s biggest strengths and was by far the longest lasting in any GPS device we’ve used at 20 hours (22 hours is claimed).

WAHOO FITNESS ELEMNT
Wahoo has made a name for itself as a cycling electronics brand after successfully changing the indoor trainer market with the KICKR trainer through seamless integration with smartphone apps and dual ANT+ and Bluetooth Smart connectability. They took the same path with the ELEMNT, this time combining connectability with simplicity.

THE TECH
What can’t the ELEMNT do? Stream the Sunday afternoon football game; that’s about it. Wahoo didn’t skimp when it came to their new feature-laden device, giving it mapping, completely customizable pages, rider tracking, over- the-air software updates, LED indicators for pacing/training zones, and it can also control the KICKR indoor trainer. For as many features and options as the ELEMNT has, we were nervous that it would be an overwhelming and time-consuming task to set up and navigate. Ultimately, this is where the ELEMNT sets itself apart from any other GPS unit we’ve used. Using the companion phone app (iOS and Android compatible), all of the setup was very intuitive and straightforward. Through the app we set up multiple pages with one that had all the power metrics we wanted, such as left-/right-pedal balance, kilojoules, average power, normalized power, cur- rent heart rate, and average heart rate. Another page we made showed all the climbing data fields we wanted with grade percentage, total ascent, vertical feet per minute, elevation, temperature and max elevation. Then, if there was a page we didn’t want to see, such as race day, it could be turned on or off via one button on the app. Another ease-of-use feature is its WiFi capability that allows automatic over-the-air updates so you never have to deal with manually updating the soft- ware. But, our outright favorite feature of the device is its route-mapping function. Any previous rides or routes from Strava and/or RideWithGPS can be pulled up and followed on the map page without ever having to upload a file to the device. Route files can also be e-mailed directly to the device, so again, it’s a wireless and simple transfer.

THE RIDE
Wahoo offers the ELEMNT a la carte for $329 or as a bundle that includes the TICKR heart rate strap and cadence sensor for $399. Both versions come stock with three mounts—one for the stem, a front mount, and an aero bar mount—and of course it, too, uses its own proprietary mount design. Both K-Edge and BarFly will have aftermarket mounts available as well. Since we had one of the very first units before full production, Wahoo warned us that there could still be a couple of bugs in the software that had yet to be flushed out. Things didn’t start out very well considering on our very first ride the unit would reset every few minutes of riding, but by the following day an update had already fixed the issue, and it was spot-on after that. After a couple of rides that fully utilized all its features, including the mapping, we were sold on how user-friendly it was for a device that had the ability to do so much. We were a little surprised that it didn’t use a touchscreen interface and instead uses six buttons—three on the top, two on the right and one on the left—to control all of the computer’s functionality.

One specific feature we thought was a little silly until actually using it was the LED indicator lights that run on the left side and top of the ELEMNT. These lights can be used to indicate what heart rate zone you’re in, or if your speed is higher or lower than your average. Midway into one ride the red lights started flashing at us, and we all know that flashing red lights are never a good thing. We had missed a turn on a route we were following, and that notification kept us from getting way off course. All of the ELEMNT’s features can be used, even if you don’t bring your phone along for the ride, with the exception of e-mail, phone call and text notifications, in addition to rider tracking.

Post-ride, there is nothing to be done other than push pause, stop and yes. Three pushes of a button and your ride is saved and sent to your phone app, and from there sent to any other third-party sites you’ve synced with. No hassles. The only time you’ll ever need to attach a cord to the ELEMNT is for charging. And even though battery life ended up coming short of the 17 hours claimed, at over 14 hours, it was better than battery life on a comparably sized Garmin 810.

THE VERDICT
Both the Super GPS and ELEMNT worked as advertised, yet there are still a couple of things that could have been better. For the Super GPS, having multiple pages that could be customized would take it up another level. Even though the bottom row of the page allows you to scroll from any number of data fields you so choose, doing so while trying to keep your eyes on the road can present a challenge. What we like about it is the outstanding battery life, small and elegant design and, of course, the price that’s far less than the ELEMNT and nearly every other GPS device.

As far as the ELEMNT goes, its size is something some testers frowned upon, especially after spending time with the much smaller Super GPS. Also, if you don’t care to bring your smartphone into the mix, or don’t have one (gasp!), then the setup and overall benefits of the unit are greatly undermined. The positives, though, are plenty. It’s by far the easiest GPS unit we’ve used in terms of setup and overall function. Other than for charging, it’s completely unnecessary to plug in for updates, uploading your ride file or downloading a course file. It is notably more expensive than the Super GPS, but is still notably less expensive than Garmin’s comparably equipped 1000 ($499) and 810 ($399) units.

There were two schools of thought in the office for which GPS computer would be the top pick, with the racers opting for the lighter and sleeker package of the Super GPS, while the adventurers among us deemed the mapping function a huge hit, making the ELEMNT a no-brainer for them.

How The Bike I Always Dreamed About Found Me