How do you say "budget friendly" in French? 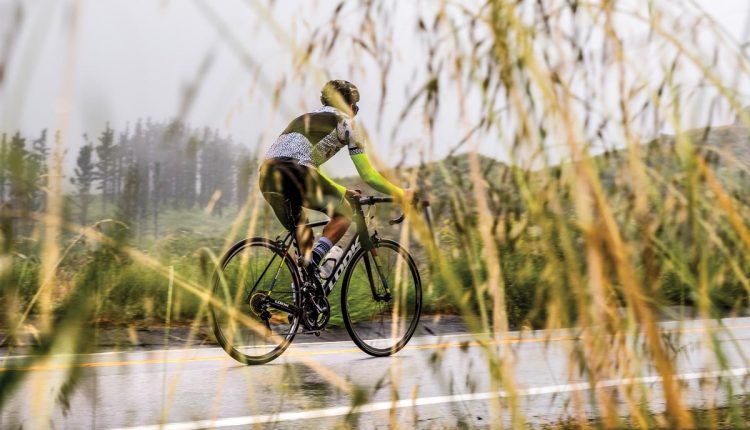 On the eve of the 2018 Tour de France, we thought it would be appropriate to highlight some two-wheeled French technology. Although Look will be showcasing a disc brake version at the upcoming Eurobike show, we first got out hands on the less-expensive rim brake version.

Look, of course, is the bike brand originally made famous by two riders: Bernard Hinault and an up and coming American by the name of Greg LeMond.

Since those early days in the mid-’80s when Look became world famous for producing Tour de France-winning technology, the brand has continued apace in the manufacture of ultra-high-end race bikes with magnificent integration and clean lines.

But for 2018, Look has sought to be known for something else. That something else is a more budget-conscious offering in the shape of the new Look 785 Huez, which is designed to be friendly to the wallet while still delivering on performance that the legacy brand is best known for. 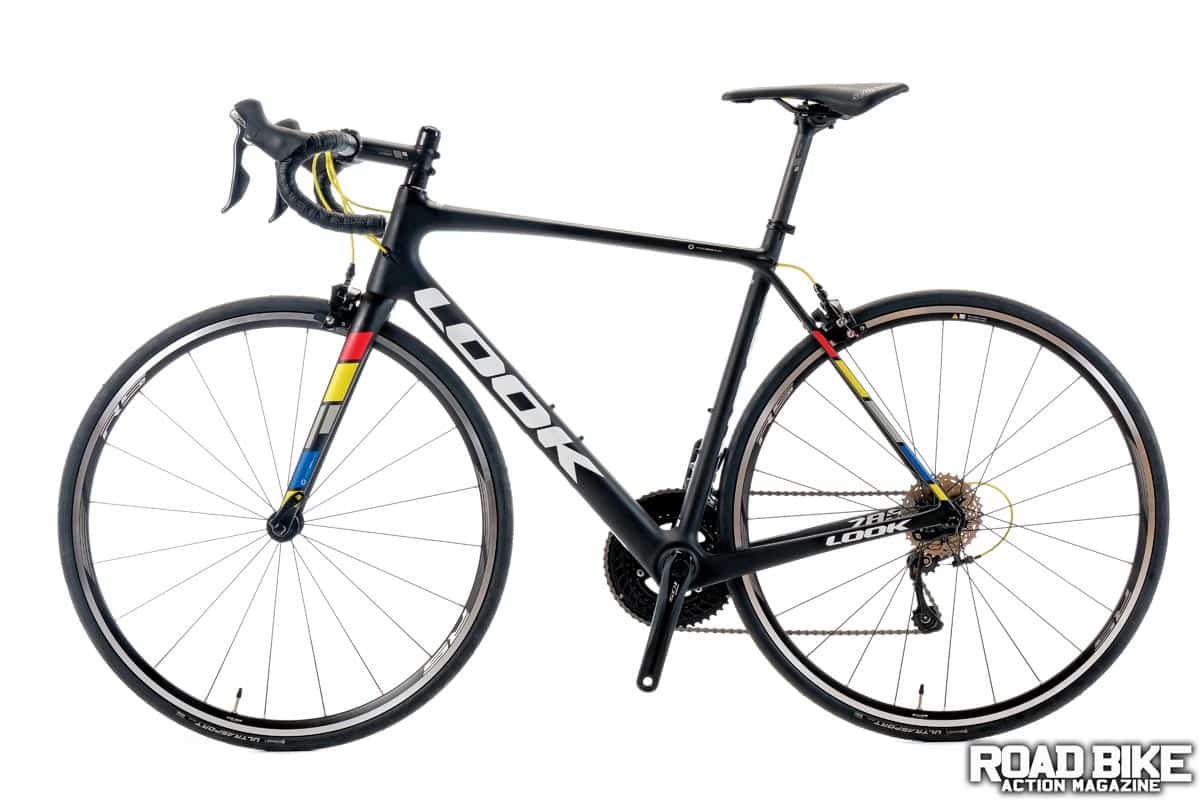 THE FRAME
The standard Look 785 Huez is sort of the little brother of the higher-end RS version (RBA, October 2017). They share the same mold and geometry but a different level of carbon. While the RS is comprised of five different carbons with over 70 percent of them high modulus or ultra-high modulus, the regular Huez uses four types of carbon and is 50-percent high-modulus and 50-percent high-resistance (T700) carbon. Look uses the same advanced layup techniques to achieve a strong yet light construction.

All cables are run internally and allow for a very clean and sleek exterior. The geometry is race-oriented and shares the same stats as the more expensive RS. There is a 16.1cm head tube at a 73-degree angle for our size-medium test bike. The 40.5cm chainstay is matched to a 98.5 wheelbase, meaning the bike is nimble and responsive. The full-carbon fork is stiff and helps keep the weight down.

THE PARTS
To help maintain its friendlier price point, Look equipped the Huez with an entry-level but reliable Shimano 105 gruppo. The 11-speed drivetrain gets its climber friendly gear inches from a 11-32 cassette mated to an 52/36 gear up front. The brake calipers were not compromised, because all things that go up must come down, so 105 once again.

For wheels, the Shimano RS wheelset was chosen. They are a mid-tier wheel that will hold up well to many training miles but make for a great backup set for anyone who wants to drop a bit more weight and upgrade to something stiffer and lighter. Continental Ultra Sport tires are chosen in a size 25mm. While narrow for today’s standards, the frame has room for at least a 28mm. The bars and stem are both Look-branded alloy, while the seatpost is a Look-branded 27.2mm carbon post. A Selle Italia saddle with alloy rails finishes off the build. 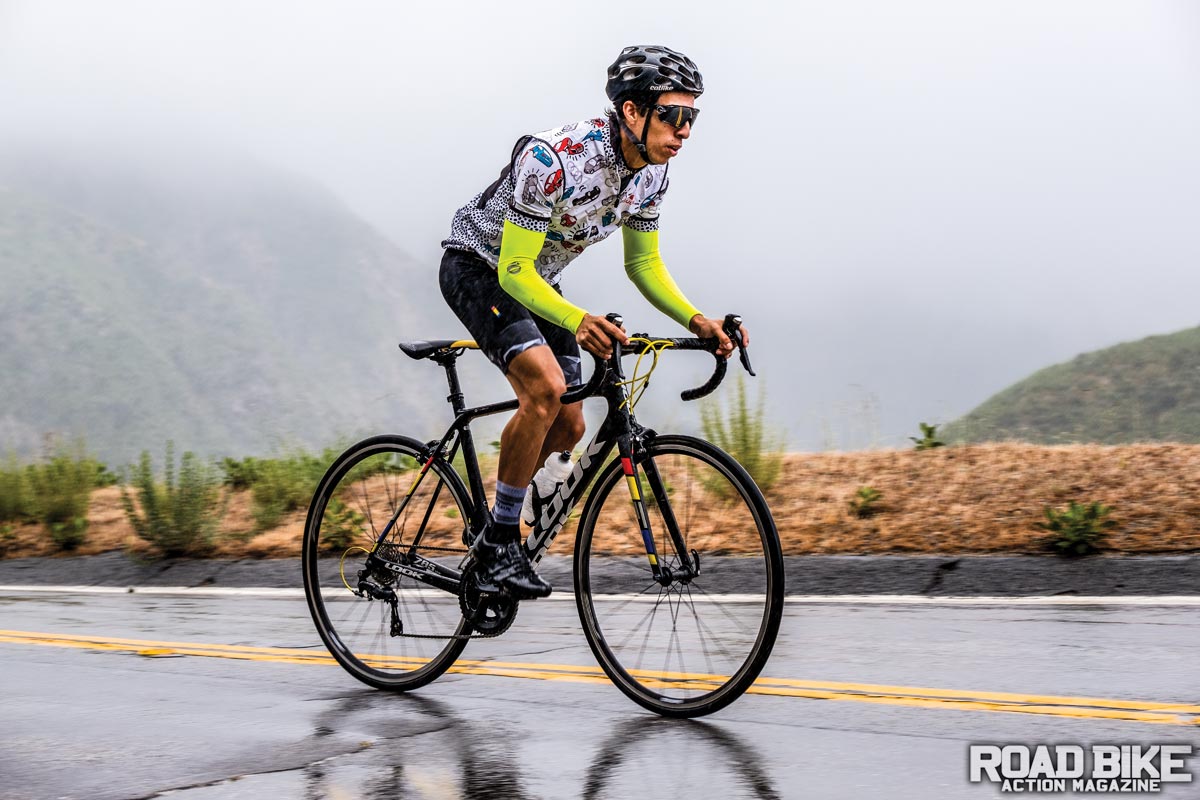 THE RIDE
The Huez is a bike that is simple and clean. It has a traditional look, but it doesn’t feel like that at all. Even with the 25mm tires, the bike felt smooth and responsive while in the saddle. Many entry-level frames that are comprised of lower-grade carbon feel dead and harsh, but not the Huez. The combination of higher T700 carbon with some lesser-grade carbons seems to be very well-balanced. The bottom bracket is stiff, and the bike accelerates under hard efforts instantly.

Out of the saddle the bike is a bit harsh, and the alloy bars have a very short reach. This matched to the short 5800 levers transferred a lot of front-end vibration and is in need of a longer stem to compensate. The fork is stiff, and the whole bike feels very confident on descents.

THE VERDICT
When we first got the bike, we figured it would be priced in the $3000–$3500 range with its full-105 build and carbon frame. Then, after a few rides, it set in that this was an above-average entry-level bike, so we figured closer to the $3500 mark. To our surprise, it was much less at only $2500, which is a steal. Yes, we would probably change the bars and, while we were at it, the stem too. The Shimano wheels were fine, but still a great place to make the first real upgrade down the road.

Look also offers the same frameset with an Ultegra build for $3199 or an Ultegra Di2 for $4399, but if you ask us, the 105 works flawless. There are four color offerings in the 785 Huez depending on the build level you choose. At the end of the day, the Look name has a lot of heritage and history, and to offer an entry-level race bike that maintains many of the characteristics of their more expensive models is a real treat.