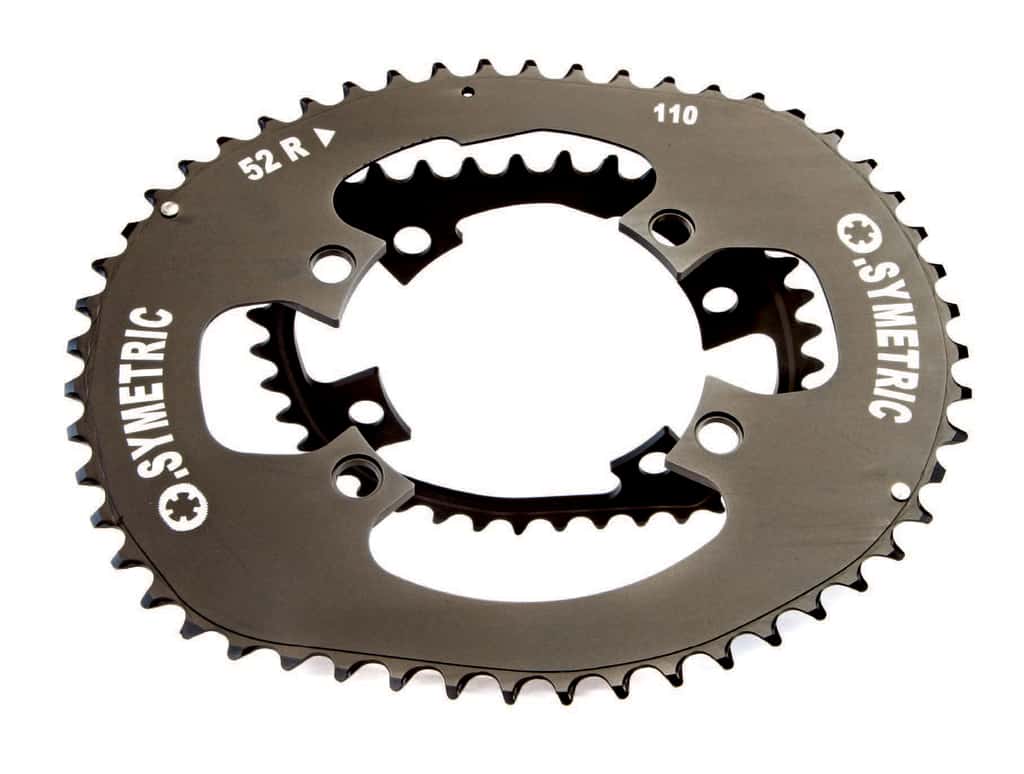 Osymetric chainrings first caught our attention when American Bobby Julich used them a decade ago while riding for CSC. In the time since, the oddly shaped chainrings have gone on to be used by a wide variety of riders, including a couple of fellas who’ve each won a big race in France—Chris Froome and Bradley Wiggins. Despite such well-known names riding the Osymetric chainrings, there hasn’t been a mass conversion to them. So, we put them to the test to see what they’re all about.

THE TECH
Our first time on Osymetric chainrings was a couple of years back, and we were unfortunately underwhelmed with the chainring quality. The big ring lacked any shifting ramps and didn’t match what the Spanish-made Rotor brand was doing with their QXL chainrings in terms of quality. Considering shifting issues are the most common complaint with Osymetric, we were grinning from ear to ear when their latest chainrings arrived featuring beautifully machined shift ramps.

Osymetric claims that their rings will give you 7 to 10 percent more power at your threshold pace, with the advantage coming from the radical asymmetry of the ring shape. They are not ovalized like Shimano’s legacy Biopace chainrings, but rather they have patented a twin-cam design that is certainly more extreme looking than Rotor and others in the asymmetric-ring market.

SETUP
As you would expect from the shape, we ran into some shifting and setup challenges with the chainrings (Osymetric has a how to setup video on their site, but it’s still not an easy task). The rings do come with some shims and adapters, but we were able to set up our test bike without them. The challenge is to set up the front derailleur correctly, because you need it high enough to clear the ring at its largest diameter but as low as possible for shifting down at the smallest part of the ring. With a fair bit of finagling, we were eventually able to get the rings to shift consistently, even if that meant not nearly as well as standard Shimano rings. We did notice, however, that shifting into the big ring as you entered the power phase of the ring (1 to 4 o’clock) and slowing the cadence slightly to bring the chain up gently seemed to provide the best shifting action. Despite all efforts to eliminate it, we also experienced chain rub on the front derailleur.

THE RIDE
Getting on these rings for the first time made us feel like we had the worst pedal stroke ever or, as the expression goes, “pedaling squares.” But after about 15 minutes, the pedaling action starts to feel more natural and, in our experience, is quite normal after the first hour. Since this was a longterm test, we were still riding all kinds of other bikes with round rings, and when switching between round and Osymetric rings, the adaption time started stabilizing at around 15 minutes.

After our first ride we noticed that, contrary to our expectations, our cadence seemed to increase. Where we did particularly notice the rings were in short accelerations. Sprinting out of a corner or jumping on a slight rise seemed much more powerful than on traditional rings for the first few pedal strokes. Another place we felt a difference was when in a position that closed the hip angle, such as getting low in the drops or on a time-trial bike; the top of the pedal stroke felt more powerful by effectively decreasing the gear size until the hip angle opened and more power could be used.

In trying to quantify what we were feeling and to get a definitive answer if the Osymetric chainrings made us faster or not, we conducted testing on a seven-mile segment with 58 feet of elevation gain several times a week in a variety of conditions. The 52/38 rings were installed on a Dura-Ace SRM crank. Regular base training was conducted routinely over four months and compared to efforts on the same segment and same cranks from the previous four months. Low-intensity efforts were intentionally picked, because these types of efforts are repeatable and subject to less variance from fitness when compared to time-trial-type efforts, so any changes in equipment should be more visible than a training effect.

For attempts that averaged between 120 and 145 beats per minute (BPM), the testing group experienced roughly a 5-percent increase in average wattage. This meant being able to ride the segment at 140 HR and 210 watts, whereas previous attempts would have been closer to 200 watts for the same heart rate. A 5-percent increase is huge just from a change in chainrings, but it’s not quite that cut and dry. Due to the chainrings’ shape, power meters read approximately 3 percent high, according to Rotor, but once that’s subtracted there is still a measurable advantage.

THE VERDICT
Unlike wheels or an aero helmet, chainring efficiency is felt under all aspects of riding (not just at speed). However, you do need some time to get used to these rings and try them in a variety of riding conditions. So unlike slapping on that aero helmet on race day, you’ll need to be more strategic about when you install and start using the Osymetric rings.

We chose a 38 inner ring because Osymetric says during the power phase it has the effective gear ratio of a 42-tooth ring, and at the dead spot the effective gear ratio of a 36.Despite this, if you do a lot of climbing and are currently using a mid-compact crank with a 36 (and who isn’t these days?), then you will be heavily over-geared using an Osymetric 38. Our advice after using them is to move down to a 34 ring if you normally ride a 36, and if you normally run a 38 or 39 inner ring to move to a 110 BCD crank and get a 36 (since 38 is the smallest they make in the 130 BCD). Available in four-arm Shimano, and five-arm in both 110 and 130 BCD.