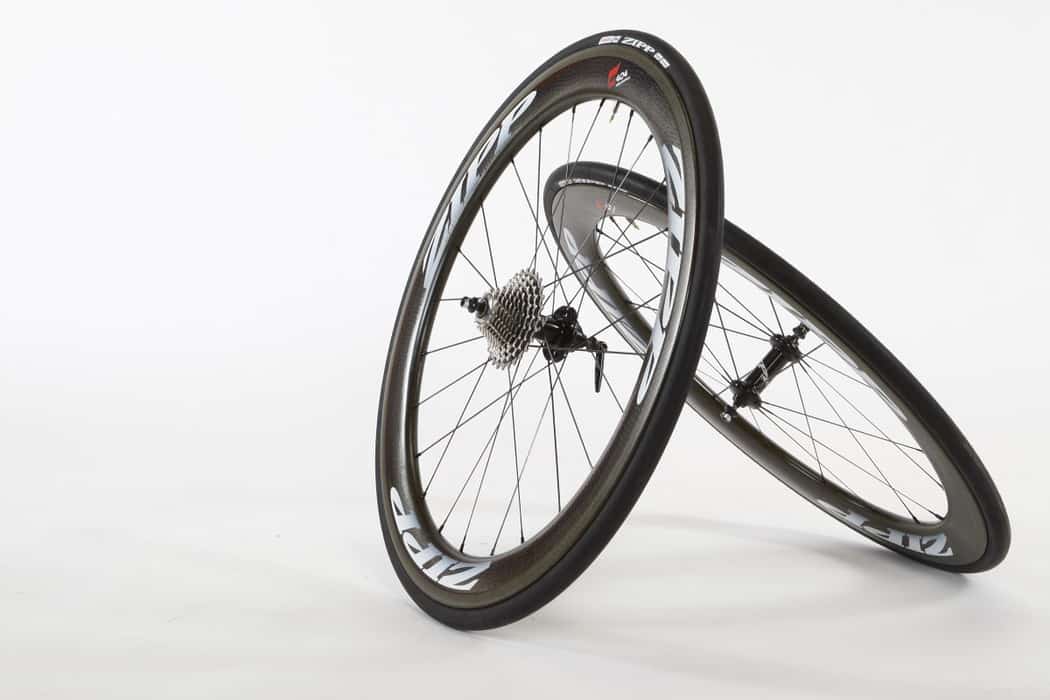 Back in 2010, Indianapolis-based carbon wheel company Zipp helped usher in a new era of wider rim widths when they released their 404 Firecrest carbon clincher. Today, Zipp remains one of the most popular wheel brands in cycling, with a catalog full of not just wheels, but tires, stems, seatposts and handlebars. Zipp recently went back to the drawing board to ﬁgure out how they could improve upon their popular 404 Firecrest model and developed the 404 Firestrike. With a retail price of $2725, the Firecrest model will remain in the line, so the Firestrike has been regarded as a limited-edition model for the time being, complete with a premium price tag starting at $3500. 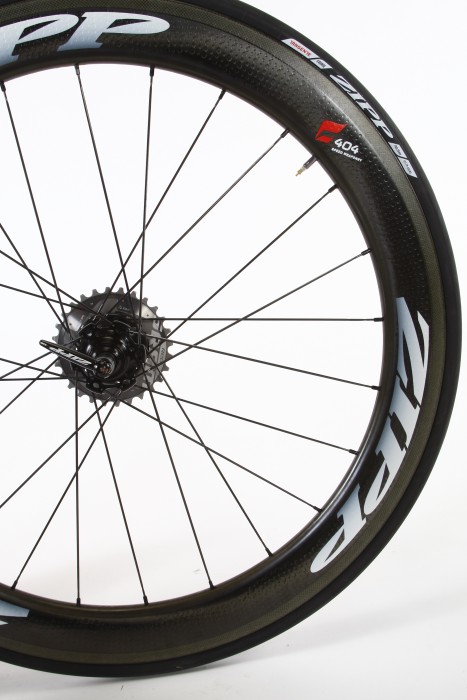 THE TECH
Advancing the 404 Firecrest carbon clincher was a matter of looking at Zipp’s other accomplishments in wheel development, speciﬁcally rim proﬁles. The 58mm-deep 404 Firecrest, which Zipp told us has been the company’s “most popular model, by leaps and bounds,” has a 26.53mm external width, a 16.25mm internal width and a 24.73mm width at the brake track. Since its release, Zipp also developed the shallower, 45mm-deep 303 Firecrest carbon clincher, and decided to bring over a few of its key measurements for the new 404 Firestrike: a brake track width of 26.4mm and an internal rim width of 17.25mm. All told, Zipp tested over 40 new rim proﬁles before settling on what would become the Firestrike. So, what do all these numbers mean? When compared to the 404 Firecrest, the new Firestrike is wider with a slightly more blunt (and more aerodynamic) proﬁle, which Zipp says gives it better handling characteristics, particularly in windy conditions.

Another aerodynamic feature that was updated for the Firestrike was Zipp’s signature dimple pattern along the rim sidewalls. Like those found on a golf ball, the dimples are designed to reduce aerodynamic drag. For the Firestrike, Zipp reconfigured their standard dimple pattern into a new version called ABLC (Aerodynamic Boundary Layer Control), which sports a uniform wave-like pattern that Zipp says helps create a more stable ride quality by helping to shed low-pressure zones around the rim surface. Likewise, the Zipp logos along the rim surface, which are stick-on decals on the Firecrest, are now printed directly onto the carbon of the Firestrike for a virtually seamless surface so as not to impair the effects of the dimples.

When it comes to the performance of carbon brake tracks and rim calipers, we’ve long held Zipp’s carbon clinchers in high regard. And for the 404 Firestrike, Zipp sought to advance that area as well. Enter the brand’s new Showstopper brake track, which has been treated with a silicon carbide-infused resin, as well as given a scalloped design (similar in concept to Mavic’s Exalith braking surface), which works in conjunction to help create more stopping power and better modulation while reducing heat buildup. Finally, the 404 Firestrike carbon clinchers come with updated hubs featuring ceramic bearings. 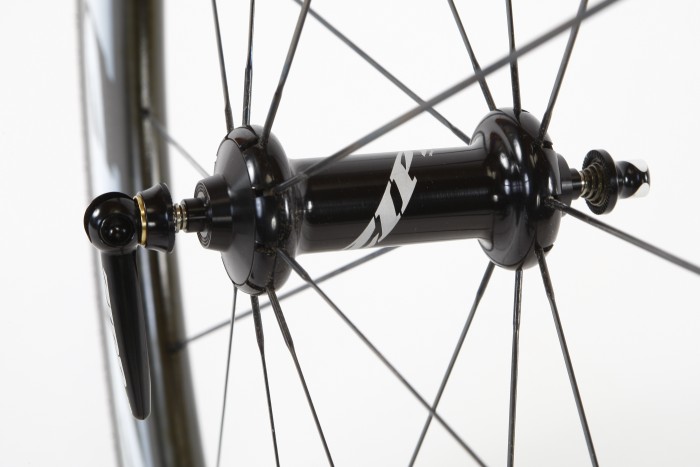 THE RIDE
Road comfort
One thing that Zipp wheels seem to always produce is a terrific ride quality, and the 404 Firestrike is no exception. For all intents and purposes, it’s identical to the feel of a set of 404 Firecrest hoops. Compared to shallower carbon clinchers, the 58mm-deep 404 has less vertical compliance, giving you more road feedback and a sometimes harsh feel over rough stretches of pavement. But compared to carbon clinchers of similar depth from other brands, the 404s are relatively smooth-rolling.
Climbing
Coming in at just over 1600 grams for a set of wheels as deep as the 404 Firestrikes is respectable, but Zipp has never placed too much emphasis on weight, preferring to expound the notion that “aero trumps weight.” That said, the 404 Firestrikes won’t inhibit your climbing abilities since they’re plenty stiff for steady uphill efforts but lack the snappiness of quick ascending attacks, making them much more at home on flat or rolling terrain.
Windy conditions
As we all know, deep-section wheels can be undeniably aerodynamic, but if the rider can’t control them when the wind picks up, then all advantages are lost. Zipp’s Firestrike wheels perform like a set of hoops half their depth in terms of handling. In blustery conditions, our testers could definitely feel the wind catching the Firestrikes, but there’s a lack of that jerky, sail-like feeling one gets with many other deep-section carbon rims. 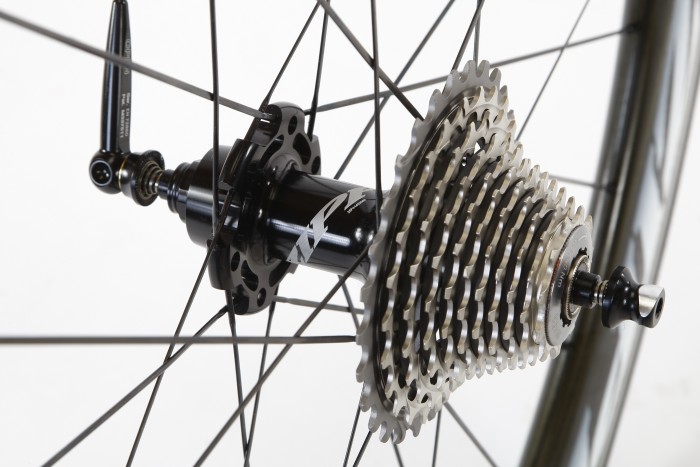 Cornering
As mentioned, because of their depth and weight, the 404 Firestrikes aren’t the snappiest of wheels on the market, but they get up to speed very well and hold a solid line through almost any corner. Supertight, technical switchback descents require a tad extra effort to control them, however.
Braking
We had considered the 404 Firecrest to be the carbon clincher by which to measure all others in terms of braking performance. Now that title has shifted to the 404 Firestrike. Zipp’s Showstopper design is superb in dry conditions and works incredibly well in wet weather too. There’s plenty of stopping power in spades. Despite this, however, they can’t quite compare to the pure stopping ability of disc brakes, although the Firestrike rim does offer better modulation than many mechanically actuated disc calipers we’ve tested.
Durability
We’ve tested many Zipp products and have rarely encountered any durability problems. Zipp offers a two-year warranty against manufacturer’s defects, but we didn’t encounter anything during our testing that would indicate the 404 Firestrike would offer anything but a long life.