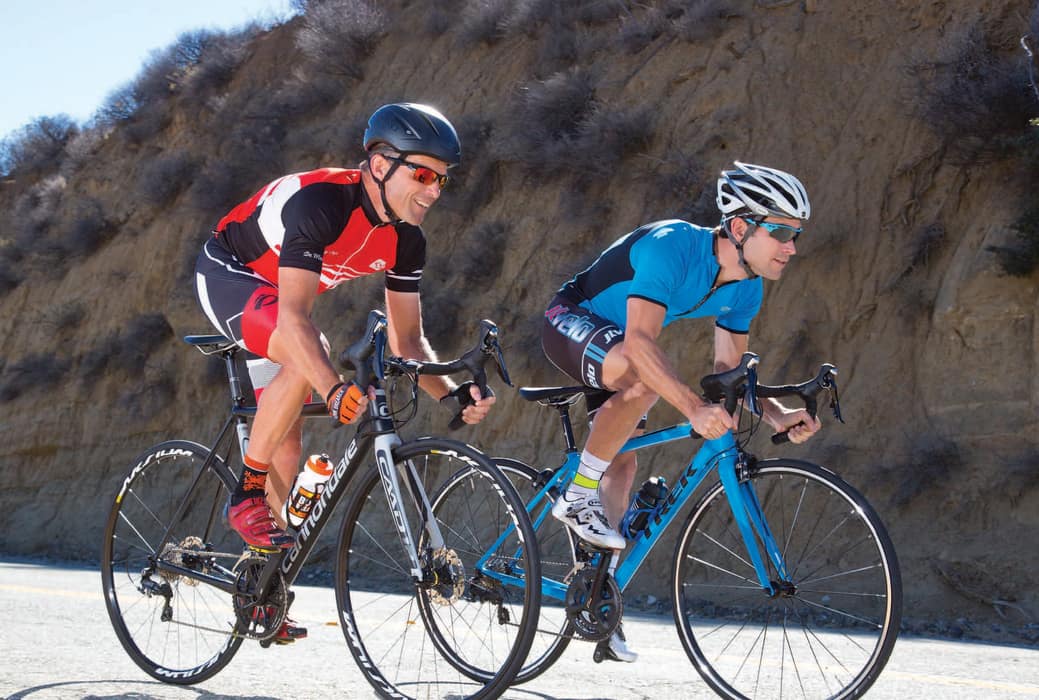 With every pro racer contesting Grand Tours on carbon fiber bikes and manufacturers devoting more resources, catalog space and SKUs to developing carbon frames at nearly every price point above $1500, it’s no secret that today’s road bike market is dominated by composite frames. By comparison, aluminum frames are often looked upon as a relic of road bike technology that’s past its prime. But that point of view couldn’t be more wrong. Meet the latest examples of the aluminum resurgence: the all-new Cannondale CAAD12 and the Trek Emonda ALR. 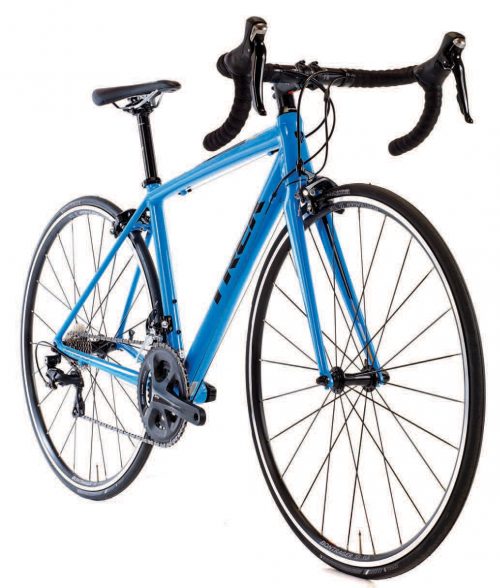 TREK EMONDA ALR 5
Trek made headlines back in the middle of 2014 when it unveiled the Emonda carbon line of road bikes that included the lightest production bike in the world (the Emonda SLR 10 that weighed under 11 pounds and cost over $15,000). It was the Wisconsin brand’s final phase of segmenting its road bike line into a trifecta of categories that already included the more aero-focused Madone and the endurance-minded (rear-suspended) Domane. Stiffness-to- weight was the name of the game for the Emonda, and now Trek has trickled the Emonda name down into the lowerpriced realm of aluminum. But just how much is the aluminum Emonda related to its carbon cousin?

THE FRAME
For starters, our size-50cm test bike features the exact same geometry as an equivalent 50cm carbon Emonda (this is Trek’s H2 Fit, which has less aggressive positioning than its optional H1 Fit available on pricier models). And there’s clearly some visual DNA that’s shared among the two bikes’ tube shapes. So although the Emonda ALR is crafted from Trek’s 300 Series Alpha aluminum, it features the carbon Emonda’s same 1 1/8- to 1 1/2-inch tapered head tube that’s mated to a carbon fork with a carbon steerer. From there, large-diameter top and down- tubes taper slightly as they make their way towards the seat tube junction and bottom bracket, respectively. The nerve center of the Emonda ALR is the BB86.5 bottom bracket, an ultra-wide and stiff platform that’s not normally found on aluminum frames.

The chainstays are straight with a slight bowing design to accommodate tires up to size 28mm. And, they’re also noticeably asymmetrical; the non-driveside chainstay is slightly thicker than its counterpart, a design intended to help better balance pedaling forces at the rear wheel, but also to house Trek’s signature DuoTrap S ANT+/ Bluetooth sensor. This will work in conjunction with all major ANT+ computers and smartphones to let you measure speed, distance, cadence and other ride metrics. The Emonda ALR also features Trek’s Invisible Weld technology, a manufacturing process that results in extremely minimal welds that the company says also increases frame strength.

THE PARTS
There are three complete bikes in the Emonda ALR line, starting with the $1309.99 Emonda ALR 4, which comes with a 10-speed Shimano Tiagra group. The top-of-the-line Emonda ALR 6, which retails for $2199.99, is spec’d with a full Shimano Ultegra 6800 group. The Emonda ALR frameset can also be had by itself for $989.99. Our Emonda ALR 5 test bike is the midrange model at $1679.99, and it’s built with an 11-speed Shimano 105 groupset, and a cockpit component collection comprised of Bontrager alloy parts, including a 27.2mm seatpost topped with a Bontrager Paradigm Race saddle. Like all of the complete bikes in the Emonda ALR line, the ALR 5 comes with Bontrager tubeless-ready rims.

THE RIDE
Weighing in at just over 18 pounds, the Emonda ALR 5 can’t lay claim to the lightweight pedigree of its carbon namesake. Likewise, its overall level of comfort is good, on par with other aluminum bikes in its class. The same can be said for its stiffness; it’s what you’d get from most other modern aluminum frames. Where the Emonda ALR shines, however, is in its fit and finish. The smooth lines of Trek’s Invisible Weld technology had countless folks on the group rides guessing it was a much pricier carbon frame.

And, the overall component list is a solid offering for the Emonda ALR 5’s sub-$1700 price point, with Shimano’s 105 groupset proving that reliable shifting needn’t cost an arm and a leg. This build does come with a set of heavier Bontrager aluminum wheels, though, which, despite offering the added benefit of tubeless, we would recommend placing atop your upgrade list to help improve the ride quality and lower the bike’s overall weight. Also, the bike’s tapered head tube and stiff front end help give it some aggressive handling characteristics that surpass most aluminum bikes in its price range. We let the Emonda ALR loose on some fast, technical descents, and the bike tracked extremely well and inspired plenty of confidence. 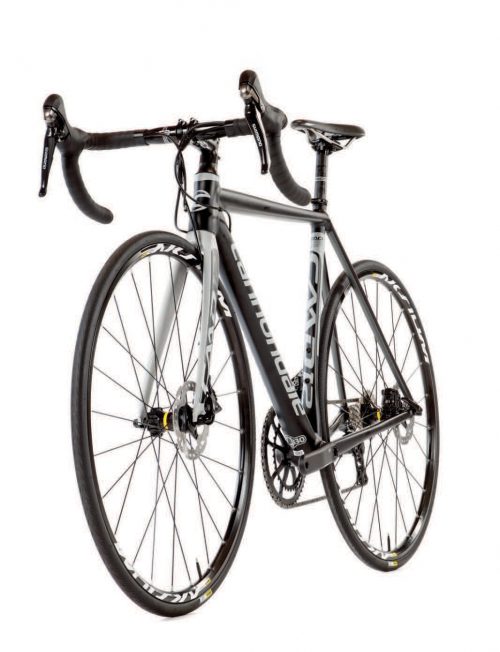 CANNONDALE CAAD12 DISC ULTEGRA
By leaps and bounds, no other bike brand’s history and success is as firmly tied to aluminum as Cannondale. The American company built its first aluminum bike back in 1983 and has seen immeasurable success with their CAAD (Cannondale Advanced Aluminum Design) series for multiple decades. The last edition, the CAAD10, was launched back in 2011 and was lauded for its performance credentials and ride quality. And now Cannondale has released their latest aluminum steed, the CAAD12, so named because the brand says that the technologies utilized in the new bike warranted a dramatic leap in nomenclature, hence the non-existence of a “CAAD11.” Marketing machinations aside, here’s what you need to know about the new CAAD12.

THE FRAME
Cannondale designed and built the CAAD12 using what they call Tube Flow and SmartForm technologies. Tube Flow modeling is accomplished via engineering software to help determine the ideal characteristics for each part of the aluminum frame with the final design brought about through hundreds of computer-generated trial-and-error versions. SmartForm technology refers to the construction method that Cannondale employed, and it’s made up of a combination of hydroforming, machining, welding and tapering techniques in order to achieve things like strength, low weight and pedaling stiffness.

What all of this ultimately means is that Cannondale set out to ensure that the CAAD12 is the most advanced aluminum road bike they’ve ever built. Cannondale’s numbers game calls out a claimed 10-percent increase in front-end stiffness, 13-percent increase in bottom bracket stiffness and a whopping 50-percent increase in compliance at the saddle over the previous generation. To achieve this enhanced compliance, the CAAD12 utilizes an undersized 25.4mm seatpost, along with Cannondale’s own Speed SAVE technology at the fork and the rear triangle. Meanwhile, performance-oriented geometry that includes a non-sloping top tube also help gives the CAAD12 added street cred as a race-worthy ride.

THE PARTS
Starting off with the Shimano 105-equipped version that retails for $1680 and going up to the high-end, Shimano DuraAce-equipped Black Inc. version that sells for $5860, there are seven bikes in the CAAD12 line. Three of the bikes feature disc brakes, including our test model, which sits right in the middle of the whole lot and retails for $2660. The CAAD12 Disc Ultegra includes Cannondale’s own HollowGram Si crankset with mid-compact 52/36 chainrings, as well as Shimano Ultegra 6800 derailleurs and R685 mechanical shifters that work in conjunction with the Shimano hydraulic disc brakes. The bike rolls on a set of Mavic Aksium Disc wheels wrapped in 25mm Mavic Yksion tires, while the rest of the build is made up of Cannondale’s own alloy handlebar and stem combination, and a carbon seatpost topped with a Fizik Arione R7 saddle.

THE RIDE
When setting up the CAAD12 for our first ride, we were immediately taken aback by the tall seat tube, which could dictate whether or not a rider with a short inseam should size down to a smaller frame size. It measured 54.5cm, which is significant because Cannondale markets our particular test bike’s size as a “50cm” frame that also includes a 52.2cm top tube. For comparison, Cannondale’s carbon SuperSix EVO sports a 51.2cm seat tube length in an equivalent size. Beyond any setup surprises, though, we fell in love with the CAAD12’s ride quality instantaneously. The previous CAAD10 model was one of our favorite test bikes, and the CAAD12 raises that bar even higher.

No, the CAAD12 doesn’t mitigate road chatter as well as a quality carbon frame, but it is noticeably smoother than any other contemporary aluminum bike we’ve ridden, particularly at the saddle where we suspect the undersized seatpost helps out quite a bit. There’s plenty of stiffness at the bottom bracket for most every rider and even those looking to race the CAAD12. Its handling characteristics are solid, with a steering feel that’s neither too heavy nor too light. Our particular build with Shimano Ultegra and disc brakes was a bit on the heavy side to call the CAAD12 a terrific climber, but for the price, its component selection and ride quality make it a terrific value. 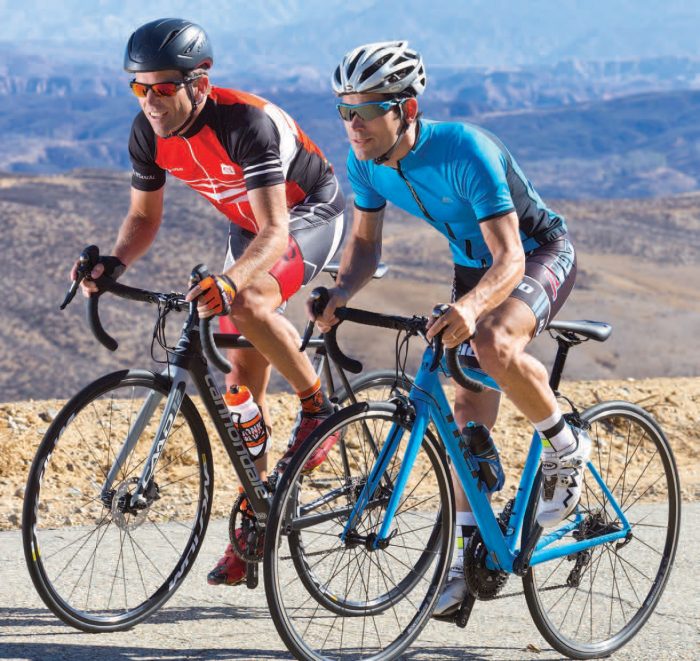 THE VERDICT
Due to the $1000 price difference between them, it would be unfair to pit these two particular bikes head to head. But our experiences with the CAAD12 and the Emonda ALR have led us to conclude that aluminum is still a viable frame material. In fact, in this day and age of an incredibly broad road bike marketplace with countless options to choose from, aluminum is more relevant than ever for those looking to maximize their spending power. Cannondale’s CAAD12 offers a ride quality that is superior to any other aluminum frame on the market, with enough steering agility and pedaling stiffness to suit the needs of fast group rides and racers alike. Three disc brake-equipped options among seven total builds gives it the nod in the choice category as well.

The Trek Emonda ALR may not be able to match its carbon forebear in the weight or ride quality categories, but it’s a terrific example of Trek’s attention to detail when it comes to manufacturing. There are only three builds to choose from, but most cyclists looking for a value-laden bike that’ll get the job done should give it a gander. And for those looking to run some wider rubber, note that both the CAAD12 and the Emonda ALR can accommodate size-28mm tires.