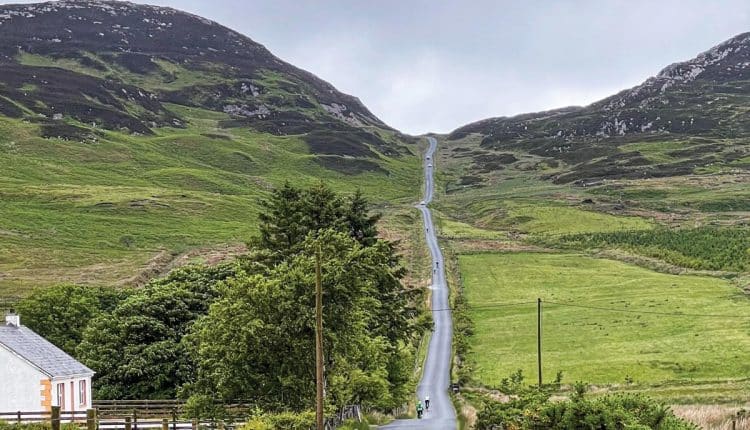 “You’ve gotta understand, they don’t have grades like this in the Tour de France.” Those were the words of John Neary, our Wilderness Ireland tour guide, which, for me, begged the question, “Then why are we doing them?” The answer, I discovered, shortly thereafter was because of the incredible landscapes that provided an idyllic backdrop to an absolutely amazing cycling trip in Ireland.

I’m a bit of a weekend warrior when it comes to cycling. I normally ride 50–75 miles per week, but typically only do so on Saturdays and Sundays. Before leaving for this trip, I made sure I was putting in the time so that I could keep pace and avoid any of the aches associated with five to seven hours in the saddle per day for the six straight days of riding.

We were a group of eight strangers, banded together with two Irish tour guides from Wilderness Ireland, set for an adventure over 200 miles and nearly 14,000 feet of climbing. Our group consisted of six Americans, with a Brit and a Canadian thrown in for good measure. Riding level-wise, we were a mix of experience and practice, but all with a common love of cycling that proved great company.

On the first day we departed from Lough Eske Castle and were treated to a gorgeous, sunny day where we soaked in the Blue Stack Mountains. We ended the day in the small village of Ardara, which reminded me that any town featuring a pub with live traditional music was worth visiting in my book.

Now, maybe it was just a one-gear difference, but getting used to the 11-speed Shimano drivetrain on my Trek Checkpoint ALR rental bike after riding my own Liv Avail Advanced Pro bike with a SRAM 12-speed took a bit of time. It wasn’t the different shifters as much, rather I sure could’ve used that extra gear on the climbs! Luckily, the Bontrager saddle on my bike was the most comfortable I’ve ever been on.

INSANE, AS IN GOOD

Day two included riding along the Slieve League Cliffs and Glengesh Pass. The two best words for the views and descents we encountered were “stunning” and “insane,” respectively. Slieve League Cliffs was an area that was less touristy than I had imagined, and yet are some of the highest cliffs in all of Europe. The views were awe-inspiring, and along the way to the top viewpoint, we passed intriguing stone sculptures and, in the distance, viewed the sign Eire (“Ireland”), which was marked into the hillside. We learned that this marking was originally made during WWII to let fighter pilots know that they were flying over neutral territory.

Such a place of significance in the U.S. would be marred with shops selling merch and tchotchkes, but up here, I noticed only a coffee wagon and a local craftswoman selling wool products to keep you warm (very practical for an area that could be severely windy). You could simply enjoy the magnificent feat of nature, which made it that much more special.

Perhaps the Irish are not as obsessed with Strava as I am and those I normally ride with. I’m known more for my Local Legend awards on Strava than for any QOMs, so when I achieved a cup for ninth place (number one for women so far this year!), I felt pretty darn accomplished. Admittedly, I was frustrated with my performance on the hills, but at the time I wasn’t aware of the significant difference in the grade I was climbing, so I could only keep pushing. 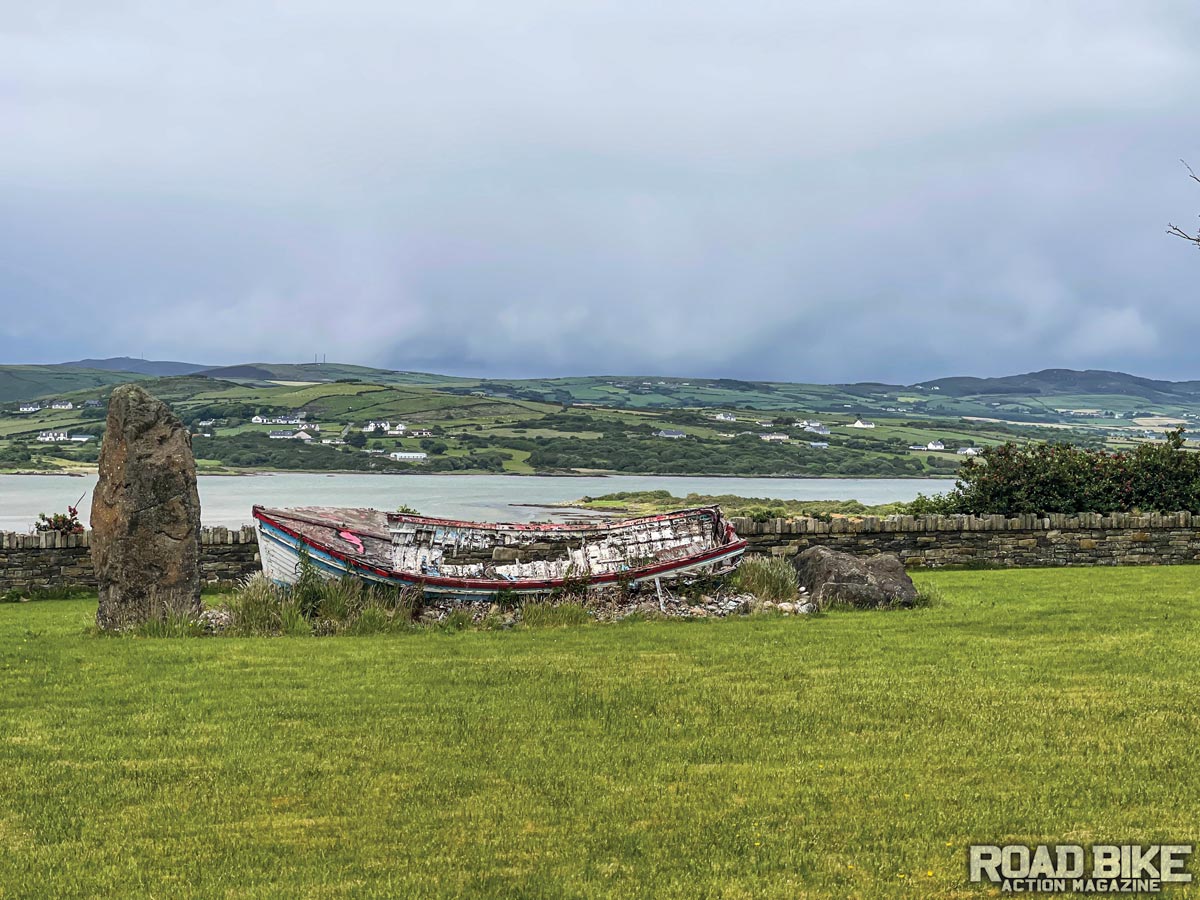 Our next day along the west coast of Donegal and up to Horn Head Peninsula was yet another beautiful day of riding in pure Irish sunshine. Along the way we stopped to explore Kilclooney Dolmen, an ancient tomb from the Neolithic era, which is even older than the Pyramids of Giza. We trekked across farmland filled with sheep and the occasional donkey to get a view. There’s such amazing history in Ireland, and it’s sprinkled throughout the area, far off the beaten path, that I was so grateful that our knowledgeable guides knew of these places and were able to give us some of their history.

Experiencing the Irish countryside through these small villages is the way I prefer to travel. Some of these roads looked like nothing more than a quaint bike trail with grass growing through the middle. And did I mention the sheep? The droves of sheep that roam these lands are incredible. We were never alone, and wherever we were we were accompanied by their bleating.

In Ireland there are no straight answers and even fewer straight roads. Whether we were climbing towards the cliffs of Slieve League (three times higher than the famed Cliffs of Moher) or Malin Head, we marveled at the majestic views and untouched landscape. We experienced hidden beaches and caves along the way, adding even more allure to this stunning undertaking. 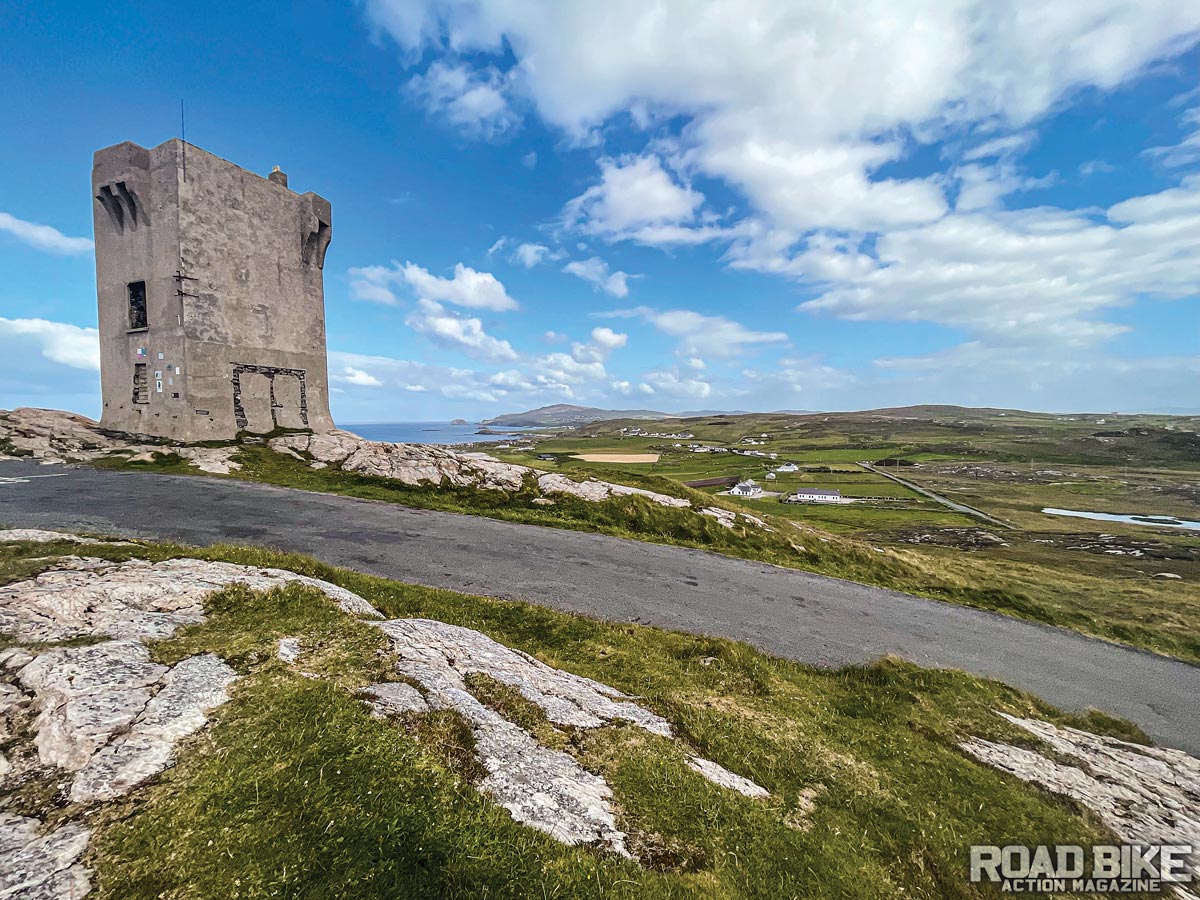 The inclines and grades on this ride put my usual rides to shame. In one instance I wondered, did I unclip and jump off the bike, or was the vertical incline so steep that my pedals ejected my feet for me? Even the descents were jaw-dropping. Pictures could do them no justice, and I would first laugh out loud at the insanity of what laid before me, then power down them.

We spent the last two nights in a gorgeous Georgian country house, surrounded by a wooded forest that was close to the sea and a short walk into the village. Sitting in one of the parlors by the fire in the evening was the perfect way to end a day exploring the land.

Having been to Ireland only once before and visiting the birthplaces of my great-grandparents, I had only a vague idea of where I was. I never imagined that I would climb the Mamore Gap only to descend into my actual ancestral past. That feeling made me grin from ear to ear. Would I sign up for another cycling trip for a future vacation? Absolutely. The camaraderie, exploring a new country, and learning so much about the land and the culture was even better than what I was hoping for.