Have Ketones become the latest secret sauce in the World Tour?

Many sport insiders are not doubting that more than a few of the selected WorldTour teams in this year’s Tour de France and will be using a nutritional supplement called ketones. In previous years, rumors have circulated that ketones would be the next big thing in sports nutrition and this year’s Tour might mark their official coming out party.

Jumbo-Visma is the latest team linked to the use of the dietary supplement, which are thought to improve recovery for endurance athletes.  In a report published in De Telegraaf, Jumbo-Visma Team manager Richard Plugge confirmed that his riders use the supplement. He says that ketones are a dietary supplement, like vitamins, that they are not on the prohibited list, and it is known that other teams use ketones.

British scientist Dr. Clarke also says that several teams were using ketones as a dietary supplement during the 2018 Tour de France, but none of them wanted to be named. Reports of the use of ketones in the professional peloton dates to the 2012 Olympic Games in London. The confirmation of ketones’ use, matched with the success of several teams this season, has reignited the debate about their use and impact on racing at this year’s Tour.

Ketones are nothing new, and we have known about them since the mid-19th century and have been used in medicine in the 20th century. Ketones are molecules derived from fat metabolism during low food intakes, such as sleep and fasting. They are used by the brain, muscles, and heart for energy. This energy is derived principally from fat metabolism, specifically fatty acids, and ketones, through beta-oxidation. We have thousands of calories available for fat burning. However, we can only use it if we are in a low-glucose state such as fasting or on a higher fat, lower carbohydrate diet. We switch to using ketones each night, to save glycogen. Enter ketone drinks. Ketone drinks can force the body into ketosis without having to fast or eat a low carbohydrate diet. Ketone drinks are usually made from ketone salts or ketone esters. Ketone esters are the primary ketone drink being used by cycling teams.

FROM WHERE DID KETONES DERIVE?

The first ketone drink was created in the early 2000s to fuel soldiers in the US army. Oxford University Scientists – Dr. Kieran Clarke of Oxford and Dr. Richard Veech of the National Institute of Health/Defense Advanced Research Projects Agency (DARPA) – were challenged to produce a foodstuff that would provide soldiers with a fuel aimed for success on the battleground. Ketone drinks are used in many sports and are expensive compared to other sports drinks ($99 for three 25g bottles). Ketones were tested by Great Britain rowers and cyclists and used in London’s 2012 Olympics games (a recent topic of debate).

There are various ketone products available, and here we will focus on the ketone ester drinks. HVMN (Health Via Modern Nutrition) ketone ester drink was created alongside the initial Oxford University researchers. The brand has exclusive access to the same organic compound created by scientists. Ketone Aid also produces ketone esters, which are made in the USA. Both products have the GRAS (Generally Recognized As Safe) labels by the FDA, and both are tested for WADA banned substances.  Both companies have supplied WorldTour Teams with ketone drinks.

Success in cycling is about energy utilization, production, and conservation. To blast up Mount Ventoux in under an hour, riders need to produce a lot of power, and therefore a lot of energy. With stages lasting 4 to 6 hours, energy conservation is the name of the game. Ketones are gaining popularity among endurance athletes for their purported effects on improving recovery and glycogen sparing capabilities.

In Travis Christofferson’s new book, “Ketones, The Fourth Fuel,” he notes that the most unique and dramatic quality of ketones is the ability to boost the antioxidant capacity of the cell–this is critically important for the recovery of endurance athletes who generate massive amounts of free-radicals from prolonged exercise. This is also the possible reason why Tour de France riders can experience an “unprecedented” ability to recover during the grueling race. Ingesting ketones could mitigate the overall damage from free radicals resulting in enhanced recovery.

WHAT DOES THE RESEARCH SAY?

James Morton, a Ph.D. in nutrition and former consultant for Team SKY, says, “the evidence for using ketone esters seems to be that it reduces the emphasis on carbohydrate metabolism. On the one hand, this could be a good thing as it may spare muscle glycogen use, meaning you have more for later. On the other, if it surpasses muscle ability to use carbohydrates as a fuel, this could be detrimental to performance. So, whether it’s a good thing or a bad thing is too early to say.”

A recent study published by Peter Hespel, a Belgian sports science researcher who works with the Deceunick-Quick Step cycling team, has demonstrated that ketone drinks can improve recovery. The subjects conducted a 3-week Tour de France simulated training camp, half the group used ketone drinks, while the other half did not. They found that ketone drinks blunted the cardiovascular, hormonal, and perceptual effects of overtraining. They also found that training load, energy intake, and performance were increased in the ketone drink group.

In 2015, Dr. David Holdsworth showed that ketone ester drinks significantly increased muscle glycogen stores after exercise. He was quoted in Cycling Weekly: “There are professional cycling teams and world-famous professional cyclists in those teams, or in that team, who have used ketones for significant internationally famous events, which they’ve won. It has been used with considerable success.”

As part of a 2015 investigation, the World Anti-Doping Agency (WADA) confirmed that ketones were not currently prohibited or monitored. But the investigation has not squashed the ketone drinks critics. AG2R team boss Vincent Lavenu has called for ketones to be stopped because they are expensive and not available to everyone. The ketone esters are currently only sold in the USA, as the EU food safety authority has not permitted their sale.

Dutch anti-doping boss, Herman Ram, is uncomfortable using ketones because it is a “grey area.” UK Anti-Doping (UKAD) head of science and medicine Nick Wojek said, “Athletes are advised to assess the risks associated with using any supplements, including those where synthetic ketones are listed as an ingredient.”

EVEN LANCE CHIMES IN 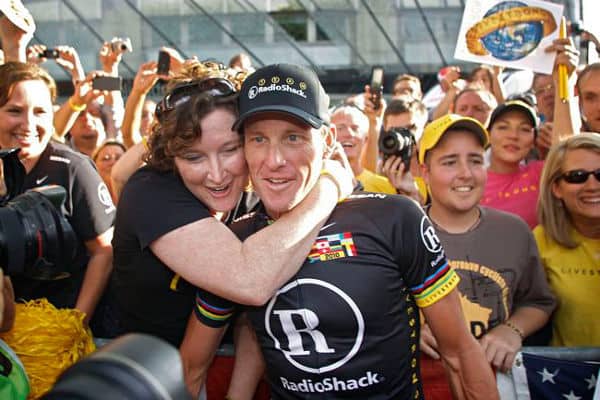 Speaking on his podcast about ketones, Lance Armstrong said: “It’s commonly known that usage of ketone esters (chemical compounds) are prevalent in the peloton. It’s totally legal. I’m not trying to expose anybody here. But the use of ketone esters is there.” He went on to say that “Team Sky was the first team that had access to ketones.”  Which raises another topic – whether Chris Froome used ketone supplements. In July 2015, Sporza reported that Belgian coach Paul van den Bosch suggested that Chris Froome use ketone supplements. However, Team Sky team manager Dave Brailsford and Chris Froome denied ever using ketones.

Finally, the MPCC (Movement for Credible Cycling) does not allow ketones in its signatory teams, a factor that Tom Dumoulin cited when withdrawing from the group. The teams bound by their MPCC membership are AG2R La Mondiale, Bora-Hansgrohe, Cofidis, EF Education First, Groupama-FDJ, Israel Start-Up-Nation, and Lotto Soudal.

We will see how the Tour de France turns out and ketones will certainly be a hot topic as many teams are divided over its use. The WorldTour riders that I have interviewed say that the ketone drinks help with recovery. Some riders experience increased performance on the bike, while others do not. It should come as no surprise that WorldTour cycling teams are using them to boost their riders’ performance.

According to reports, nearly half of the teams currently racing the Tour de France will be using ketones. Remember that ketones can be considered a fourth fuel source for exercise along with carbohydrates, fats, and proteins. They are produced in the body during fasting or a ketogenic diet but can also be ingested in a ketone drink.

Research suggests they may be beneficial in endurance exercise through efficient energy production and carbohydrate sparing effect. They aid recovery through boosting the antioxidant capacity in the cells, increasing glycogen, and protein synthesis. Overdosing can make for a very unhappy gut and diarrhea. The studies published to date support their ability to provide a performance benefit to athletes, but there’s still further research needed. 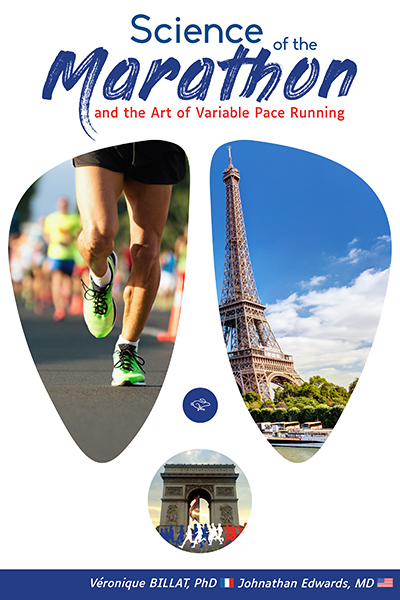 THE SCIENCE OF THE MARATHON IS A BOOK ABOUT THE ART OF VARIABLE PACE RUNNING. WE SHOW YOU HOW TO PREVENT INJURIES, OVERTRAINING, AND FIND THE JOY OF RUNNING. THE SCIENCE OF THE MARATHON AND THE ART OF VARIABLE PACE RUNNING ENCOURAGES YOU TO REDISCOVER RUNNING BY GRADUALLY SLOWING DOWN, RUNNING AT YOUR OWN PACE, AND LEARNING TO ACCELERATE. IT WILL TAKE NO LONGER THAN 30 – 40 MINUTES PER SESSION AND 2 TO 3 SESSIONS PER WEEK. INTEGRATING THIS TYPE OF TRAINING INTO YOUR HOME OR WORKPLACE IS EASY. OUR TRAINING METHODS ARE EQUALLY APPLICABLE TO OTHER ENDURANCE SPORTS LIKE CYCLING, SWIMMING, ROWING, AND CROSS-COUNTRY SKIING. WE INVITE YOU TO DISCOVER THIS NEW WAY OF RUNNING AS IT IS A REALISTIC, MINIMALIST-BASED TRAINING USING YOUR RUNNING MIND-BODY FEELINGS, SENSATIONS, AND LIFESTYLE.