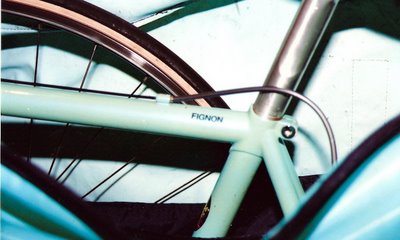 Share
In 1992, I had the opportunity to meet Laurent Fignon when he and the Gatorade/Bianchi team visited for a local road race. I was working in my father’s shop at the time, and through some local connections, we became the ship-to location and HQ for the Gatorade/Bianchi team.
The race was scheduled for Saturday and on Thursday the team machines poured into the shop, fresh from Europe and still warm from the gentle hands of Customs. The shop’s sales floor was dotted with tasty treats from the PRO peloton as the Gatorade/Bianchi team mechanics arrived. The mechanics carried with them their traditional travel tool case, filled with the hand tools of their profession, all neatly packaged for the relentless travel of the PRO season. I will never forget the days the PROs came to town. We worked side-by-side with the mechanics to prepare the machines and the equipment for the team: we housed the team travel bags and some of the riders’ team gear and, as the bikes were prepared, they were rolled out of the shop and into the sales area to await their owners. At 10 AM, Fignon and his teammates arrived at the shop, and despite the summer temps, they arrived dressed in tights and long sleeve jerseys and sandals. Each carried their cycling shoes in small travel shoe bags. By 11 AM, the team mounted their machines and rolled out for a spin with a few of the shop’s select customers in tow. The ride headed north, following the route we knew as the “Executive Route” (named this because it abutted the side roads and was less conducive to the fisticuffs rides of the weekend and better-suited for idle chat and a gentlemen’s pace). A water bottle and a banana into the ride, we neared the turnaround point. Fignon and his team rolled to a stop behind my father, who was leading the guests when one of the local riders coasted into the back of Fignon’s bike, throwing himself onto the ground in a whirlwind of apologies and embarrassment.

When my father tells this story, his expressions and body language mimic the Frenchman’s response to accurately capture the moment. As he describes it, Fignon casually looks over his shoulder at the fallen rider and, with a look of dismay, simply shrugs his shoulders and with complete PROness rolls off leaving the dejected rider laying on the pavement.

Once the dusty, but uninjured, rider caught up with the group, he rode alongside my father and began to weave an apology. My father looks over and replies, “You just crashed into “The Professor.” Don’t talk to me, I don’t know you.”

The ride back to the shop was less eventful: there were no more crashes and no international incidents. Following the ride, the PROs and the team mechanics were eager to dig into some American culture and began to shop the Pearl Izumi inventory. It was surreal. The PROs bought so much Pearl clothing filling their backpacks with the Pearl Izumi Dot Glove and the Thermal Lobster Claw while the mechanics bought the two remaining neon orange full-suspension Trek 9000s we had in stock. We could barely give those bikes away but the mechanics were delighted when we offered them some industry courtesy selling them the bikes at wholesale. The pinnacle was sitting down to lunch together, the team mechanics, the PROs, Fignon, our shop cat Tullio, and the shop employees to toss back some McD’s at the request of our guests. Sharing a Big Mac with Fignon is certainly on my personal short list of great cycling moments.
To learn more about Radio Freddy, please check out www.belgiumkneewarmers.com