After the hoopla died down, it was back on the bike and back to work 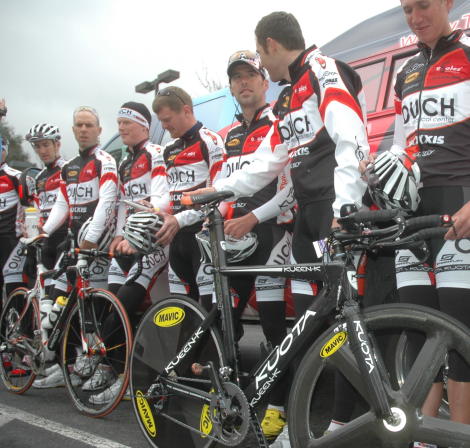 It was the late winter on 2009 when I ventured out with the newly former Ouch team that not only included cyclocross star Tim Johnson, but also the returning to competition Floyd Landis. The team camp marked another step in the controversial career of Landis, who of course eventually quit racing altogether before  going on to create a burgeoning CBD  business  empire (Floyd’s of Leadville).

FLOYD IS BACK!
RBA Catches Up With Floyd Landis As He Prepares For the 2009 Season

QUOTE: “I mean, you know it’s hard, you know how much it hurts to be a good bike racer. I would’ve never forced myself to to ride enough and train like this without having a team. I know it hurts, but I know I can do it.” Floyd on the realities of being a bike racer.

QUOTE: “Yeah, I’d check out the Internet every once in awhile…as long as I hadn’t done anything public the week before!” Floyd letting the dinner crowd in on how he spend some of his time away from racing.

By now, everybody should know the Floyd Landis story. Born on a Mennonite farm in Pennsylvania in 1975, Landis made his name as a cyclist first in the dirt ranks in 1993 as a top ranked mountain biker. He hit the road full-time for the Mercury team in 1999 before moving on to the U.S. Postal team as a teammate to none other than Lance Armstrong. Following some celebrated rides there, Floyd moved over to the Phonak team in 2005 where he could use all he learned under Lance to act as the team leader on the Swiss-based team.

What followed with his stint at Phonak could best be described as a nightmare. In 2006, after standing atop the Tour de France podium as only the third American to ever win the big race in July, Floyd was stripped of the victory soon afterwards when he was found to have an abnormally high level of testosterone. What ensued was a bizarre courtroom drama that gave a new definition of the word surreal. It was high ball mix of complex science, alleged conspiracy, tears, mystery and admissions of childhood abuse from Greg LeMond. Wow!

In the end, Floyd was cast aside, stripped of his win and sent packing to the lonely hills of Temecula, California that he called home with his wife.

Just this last weekend, I ran into Floyd again at the team presentation of the newly formed OUCH/Maxxis sponsored squad (formerly Healthnet/Maxxis). OUCH (Osteoarthritis Universal Care & Hope) is the organization made of up doctors who specialize in treating the debilitating effects of Osteoarthritis and they played a key role in getting Floyd back on his bike after a crash induced broken hip. 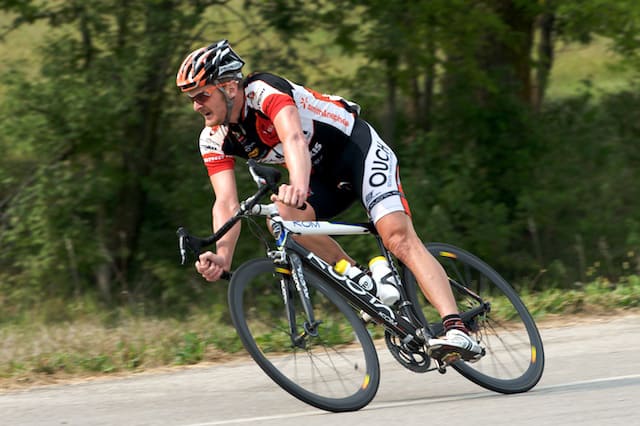 I’ve known Floyd since those early mountain bike days when he was an up and coming Expert riding a blue anodized GT Zaskar. Following the time that I got in trouble with one of his early sponsors when I wrote that he was good enough to deserve a (factory) ride better than that which he was getting, I guess you could say I’ve been a partisan fan of Floyds for awhile. I like Floyd, he has an awesome sense of humor and other than Robbie McEwen, no one can pull better sit-down wheelies on a road bike!

My mission over the weekend was to not only check out the team and talk motocross with team captain Tim Johnson, but to interview Floyd. I cared not one whit about getting to the bottom of all the hoopla. What was most evident to me was that team newbie or not, (and with apologies to both Johnson and team stand-out/two-time NRC champ Rory Sutherland) it’s obvious that Floyd is THE man on the team now. Everybody wants to talk to him, everyone wants a photo of him. I wouldn’t have a lot of time with him before the group ride took off, but I was able to cajole him into joining me in room 211 of the Holiday Inn Express to watch the TV coverage of the previous nights Supercross race in Houston and to have some words.

Like many, I’m curious how much of this comeback has to do with his trying to redeem himself, his image, his history. There are many questions and just as many opinions. I guess it’s our history that allows me to have such a different opinion of Floyd versus Tyler Hamilton. For now, Floyd Landis is back and that alone is worth celebrating. I look forward to not only having more time to talk in the near future, but watching him race.

RBA: Floyd, exactly what has gone on with your hip since you first injured it?

Floyd: The crash occurred in January of 2003 and they put three big screws in my hip to hold it together. In May of that year they pulled the original screws out and put three new ones in. In January 2004 they pulled all the screws out and drilled into my femur to try and increase the blood flow. Finally, in late 2006 we just did a complete hip replacement. It’s good now, my flexibility is back, there’s no pain, I’d say it’s as good as new.

RBA: We’ve been talking to some of your teammates and they’re all commenting on how strong you are. Most people associate racing as the best way to get, and stay, fast, but you haven’t been racing at all. What gives?

Floyd: For the last six months I’ve been training a lot and training hard. I think right now I’m riding well because I haven’t been racing for two years. There usually aren’t a lot of road guys who are going strong in January, I think it’s mostly that those guys are just on a different schedule.

RBA: So what has your training schedule looked like?

Floyd: I usually let the weather dictate how much I ride. I’d say riding 20-22 hours a week has been the norm for me. You’re right that you really can’t simulate racing when you’re training, but being a local around here for so many years as helped because I’m familiar with all the climbs and what it takes to get up them so if I can simulate the efforts that I was making a few years ago it works out pretty good. I know how I need to feel to be in good shape and more importantly, what I need to do to get where I need to be.

RBA: How does it feel to be back?

Floyd: Great really. It’s nice to have a goal with my riding again. I found out what it’s like to be an average rider and you know, not that there’s anything wrong with that, but after so many years of being so purposeful with my riding, just riding my bike felt so arbitrary. I definitely needed something to work for. Being on a team and racing again makes riding fun – it gives me a reason to feel motivated. I’m 33 now and I think I still have a few more years of racing in me. I know I missed out on the excitement that comes with this sport and I think I took that for granted. I won’t be making that mistake this time around.

I mean, you know it’s hard, you know how much it hurts to be a good bike racer. I would’ve never forced myself to to ride enough and train like this without having a team. I know it hurts, but I know I can do it. The guys on this team are good, they’ve just never had to do what you have to do to compete in Europe.

RBA: It’s obviously very early in your comeback, but do you envision yourself ever racing in Europe again?

Floyd: I wouldn’t rule it out, but it’s not a goal of mine. For as long as I was a racer riding in the Tour de France had always been a dream of mine, not a goal. Right now I feel lucky enough to have those experiences of doing the big races in Europe and if I never get the chance to do them again I won’t feel like I’ve missed out on anything. I mean, it’s not like I wouldn’t race in Europe again, but there are guys on this team that have that dream too and if I can help them attain that, well, that would be just fine.

QUOTE: “Yeah, I guess I should’ve thought that through a little more beforehand!” Floyd ruminating on the decision making process he relied on to get up and sing some Duran Duran song at a Karaoke bar following the team dinner (at the news that someone had a video of the performance).

QUOTE: “After the Hour of Power ride that Floyd took us on, it was like we all looked at him and said, “Okay, you’ve done it. You’ve hurt us. It’s done – so stop!” Rory Sutherland recounting his emotions while Floyd pulled the team up a particularly steep (39/26) grade.

QUOTE: “I think he opened our eyes to how hard you can actually train!” Roman Kilun.