Festka is as much about art as they are about bikes 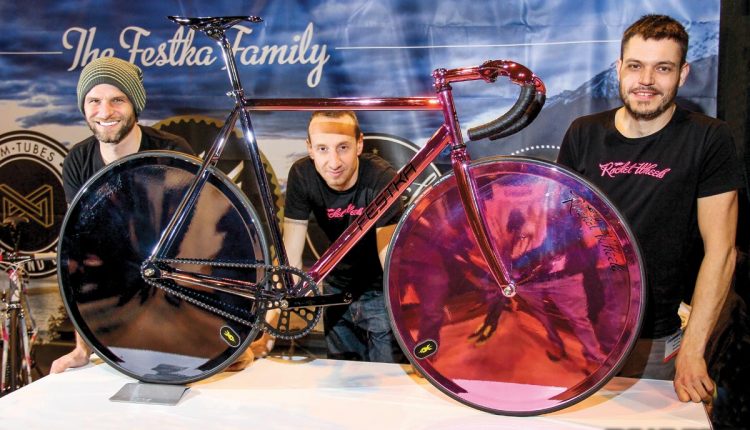 I still recall the first time I ran into the lads from Festka bikes. It was during setup at the 2013 North American Handmade Bicycle Show in Denver, Colorado. Their booth, as it was, consisted of a 10×10 carpeted patch with some travel bags and a few boxes lying about—nothing else. It seemed that all the bikes were lost somewhere in transit between their home base in Prague, Czech Republic, and the “Mile High” city. As the hours ticked away, still nothing. 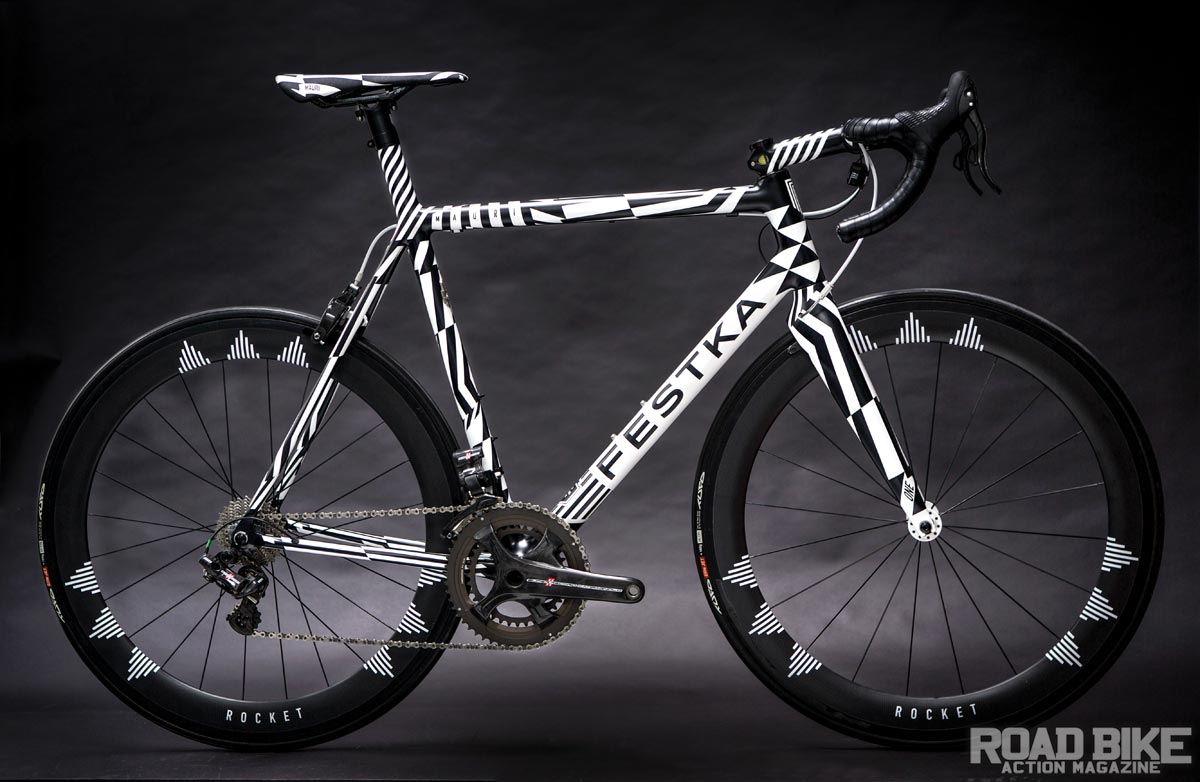 A few hours later, everything had changed. Where once there was an empty lot, save for a few scraggly, jet-lagged Czechs lying about, there was now a flurry of activity and a stainless steel bike with a pink chromed finish and disc wheel that was one of the most sensationally fabulous and extravagant show bikes I’d ever seen sitting center stage.

In the many years since, Festka has continued to produce a varied array of visually stunning bikes. As we’ve continued to be recipients of press releases regarding a series of project bikes, I decided it was time to finally find out more about the creative brand. Following a handful of email exchanges with Festka co-founder Michael Mourecek, this is what we found out.

When was Festka founded, and what was its original mission statement?

I didn’t make it to the very top as a racer, although I did win a few national championships and a world junior championship. What I see as more important is that I’d learned how to ride a bike well. Thanks to thousands of hours spent on the track, I think I have a good cycling feel. I’ve traveled the world with my bike and got a chance to “be there” for a while. I think I can say I used to be a good cyclist and that I understand the sport quite a bit. However, I never thought I’d end up as a bike maker, but the Lord’s ways are mysterious. 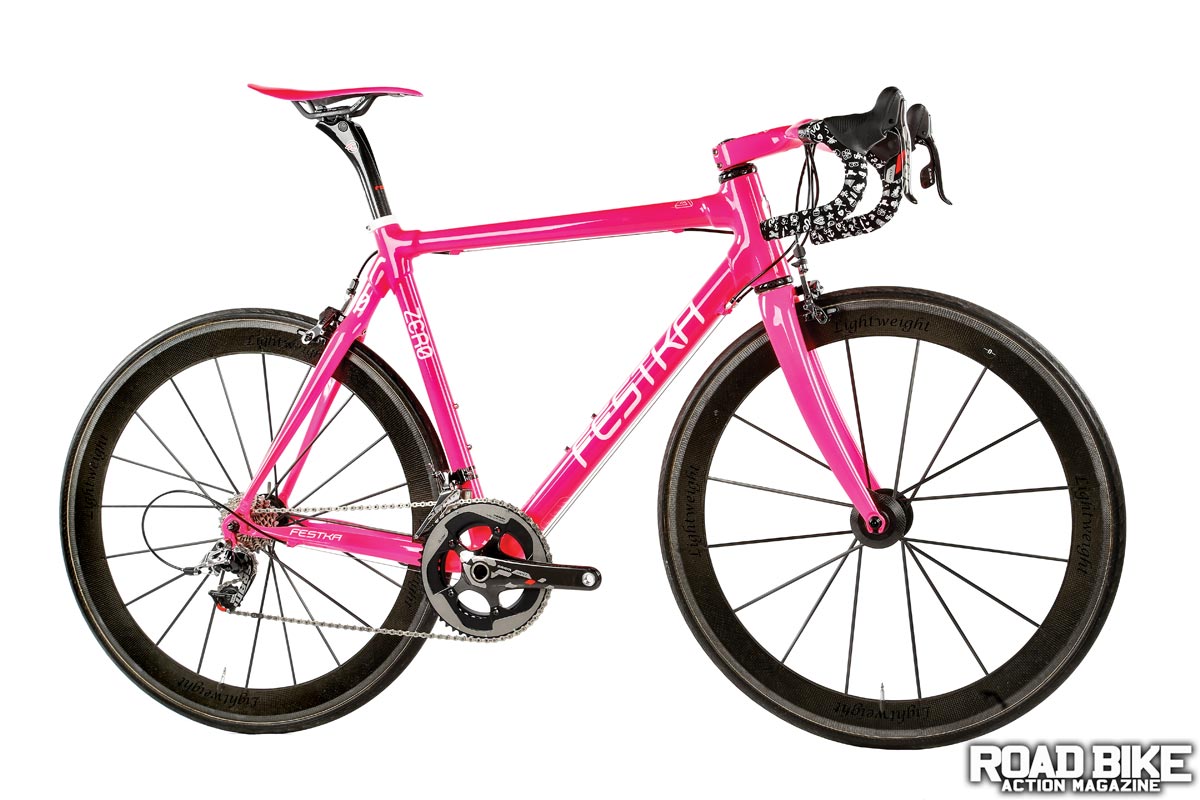 “We like to combine the work of humans and robots and want to continue that way. We will always use artisans for the kind of work robots can’t do.”

I founded Festka together with my friend Ondrej Novotný in 2010. From the very beginning we wanted to make bikes for the most demanding clientele. We believe that every rider is different in mind and body, and deserves an original bike that is technologically up to scratch and will serve its rider well. I don’t think our mission has changed. It still may as time goes on. But, the products have, and they’ve gradually gotten better and better at fulfilling our mission.

The name “Festka” means what exactly?

Festka is a Czech cyclist slang expression for a track bike or a fixie. I used to ride on the track where the word was used all the time, although most mortals wouldn’t know what it meant. I never wanted to have my name on our frames, because there is the work of so many people behind every frame that it wouldn’t feel right. When I started thinking about the name for our bikes, I thought of Festka, and when I saw that the .com domain for it was free, I decided to go with it. It’s not about the name. It’s what’s behind it that’s important. 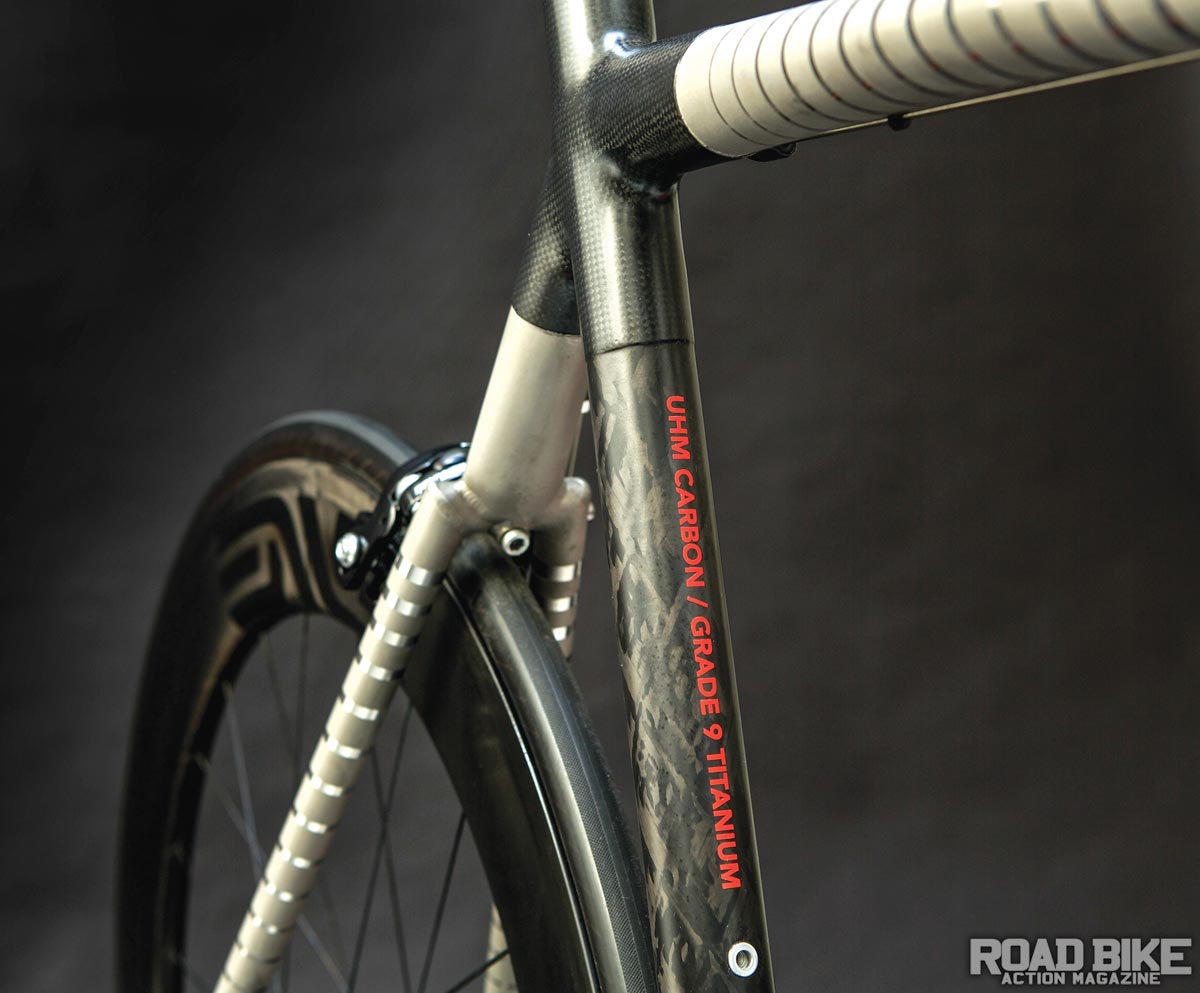 What is the Festka company comprised of in terms of location and employees?

We do almost everything in Prague—frame production, sales, R&D, management, bike fitting, graphic design. The only part of the process outside of Prague is the paint shop, which operates as a separate entity. Our employees are Czech nationals coming from all over the country. The only exception is our Czech-Italian CEO.

How would you describe the cycling scene in Prague?

Prague has an interesting cycling scene. It’s not your typical metropolis of 1.5 million inhabitants. There have always been bike builders doing good work. Although Prague is not ideal for city cycling due to its hilly profile and center composed of narrow streets with tram tracks and huge cobblestones, people ride their bikes around town. We have an interesting used bike scene similar to what you’d find in Berlin. There are an equal number of roadies and mountain bikers. You can give your enduro bike a spin a mere 30 minutes away. We have two velodromes, and only a 1 1/2-hour ride in any direction will get you to the mountains. I personally don’t miss anything here. 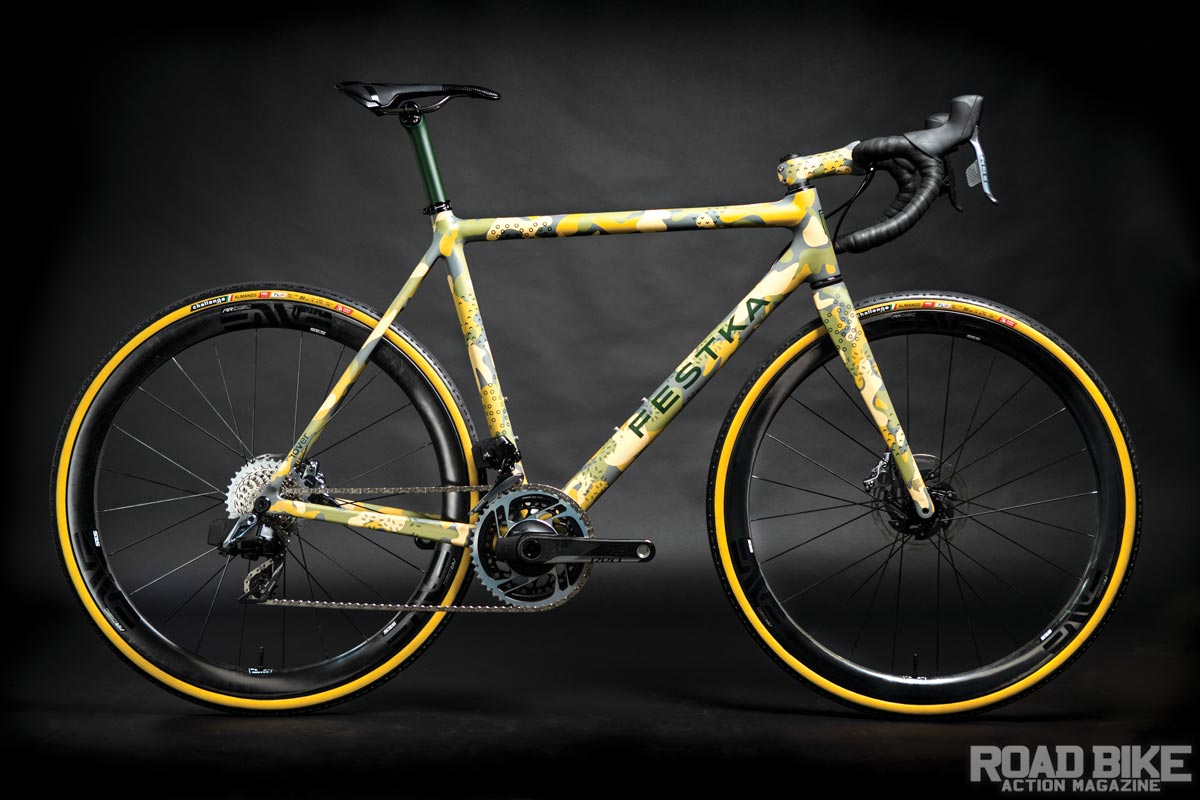 What was your reaction to attending NAHBS?

The first show we attended was in 2012 in Sacramento. We arrived with great admiration for the brands, such as Speedwagen, Parlee, Cherubim, nevertheless. With great respect for American brands, I am more influenced by European frame makers. Some brands influence and inspire us with their products, others with their approach to the customer or the way they go about their business. I have a lot of respect for anyone who has managed to develop custom frame-making into a sustainable business. The brand Saffron is probably my favorite European micro-brand. And, I’m always inspired by Colnago, the brand I used to ride in my racing days.

Is there a most popular frame material/model over the years?

The carbon model Scalatore accounts for 60 percent of our sales. It’s been holding this position for four years, which makes us very happy because it’s our top-of-the-range model. 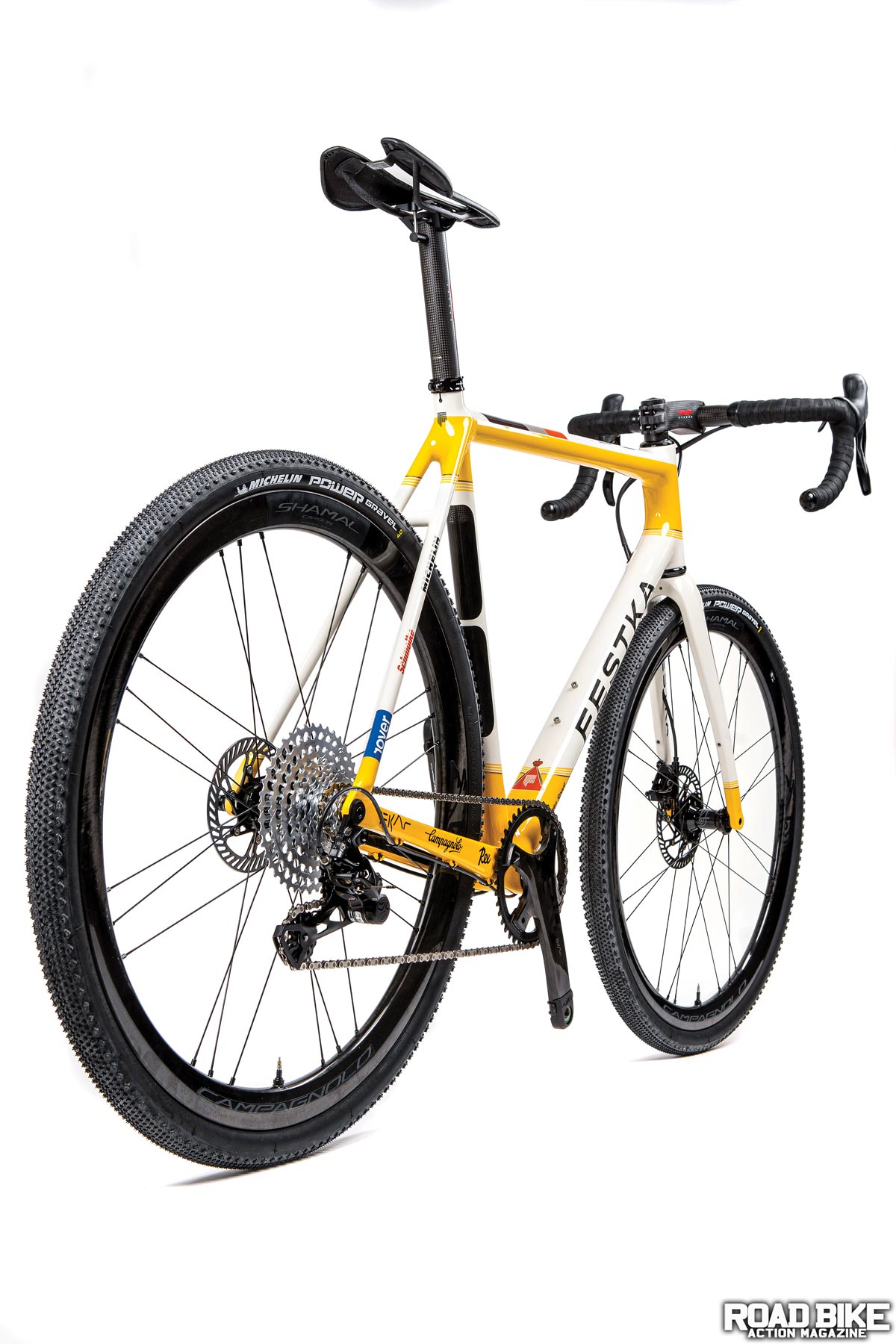 And what about the paint schemes. Where do they all come from?

Except for a few co-ops, they all originate in-house. Tom Hnida, our art director, is a founding member of the company. All the Festka design schemes we’ve ever made are his work. 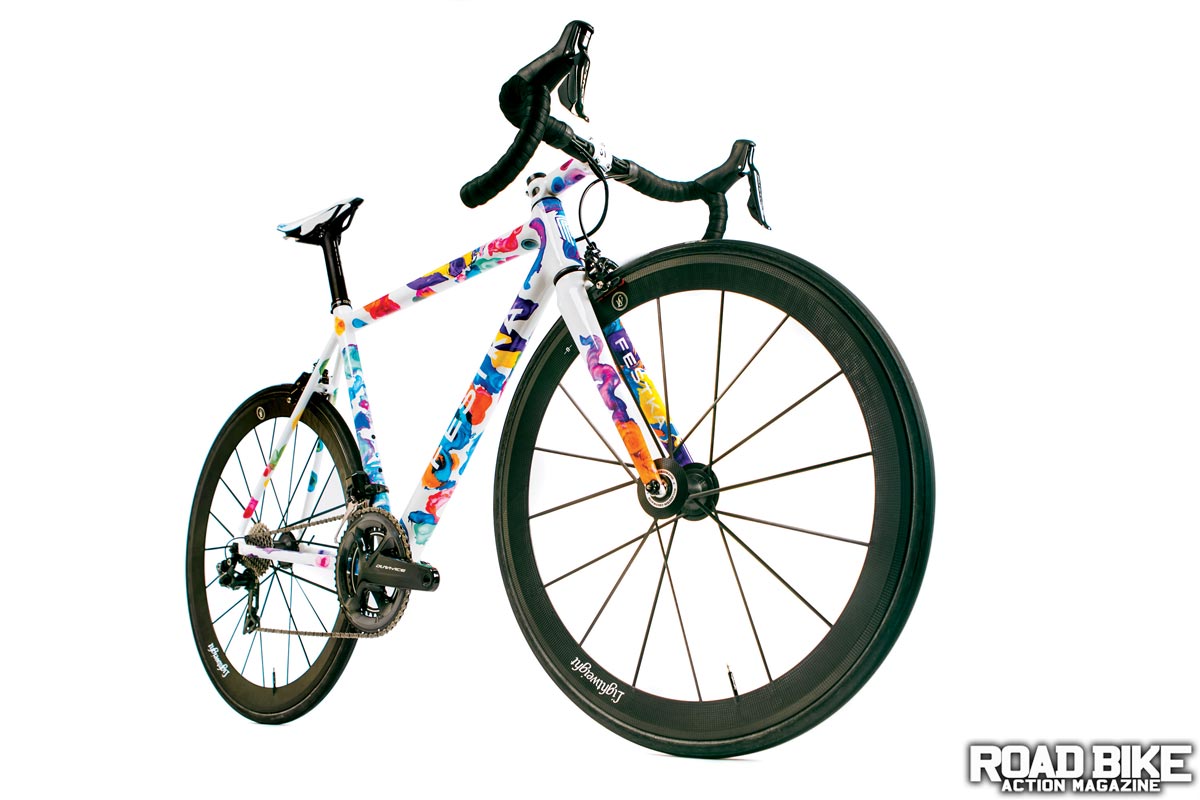 How many frames are produced each year, and is there an overall Festka design principle?

We now make some 300 frames a year, but if it hadn’t been for the pandemic, we would have increased this number last year. We’re currently building a new paint shop and work towards increasing the production capacity. Festka frames have been conceived with future automation in mind. We like to combine the work of humans and robots and want to continue that way. We will always use artisans for the kind of work robots can’t do.

IS BIGGER ANY BETTER?