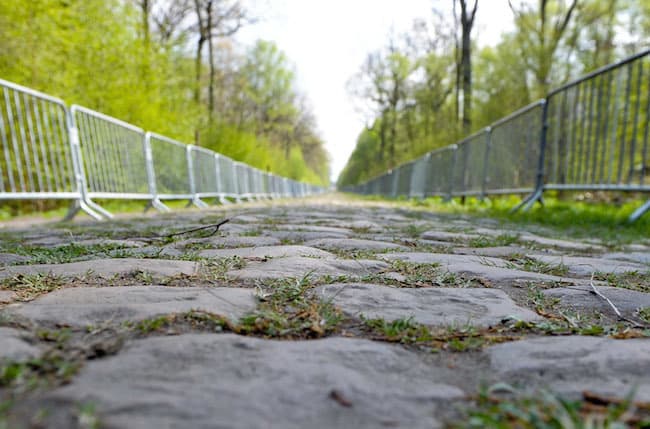 Share
Wednesday’s stage of the 2014 Tour de France will feature a variety of cobblestone sections, which should prove challenging to the field at large and the GC contenders, in particular. (Photo: Bettini)

Chris Froome has a psychological advantage over his main rivals going into Wednesday’s tricky cobblestone stage at the Tour de France, says former cobbles specialist Gilbert Duclos-Lassalle. The 155.5km fifth stage from Ypres in Belgium to Arenberg Porte du Hainault includes a part of the famous Paris-Roubaix cobbled Classic course. Nine separate cobbled sections totalling 15.4km will be covered ? in the opposite direction to the prestigious Spring Classic – presenting riders with an added difficulty on a day that may also provide strong crosswinds. It means the potential to lose the Tour will be very real for the overall contenders as crashing on the cobbles or being caught behind a fall and split in the peloton could see a rider lose a lot of time. And Duclos-Lassalee, who won two Paris-Roubaix crowns back-to-back in the early 1990s, believes Froome has already gained a mental advantage over Alberto Contador and Vincenzo Nibali in the early stages of the Tour.

“Now they’re not specialists so they’ve got the fear of not knowing how to ride cobbles,” said the Frenchman. “If you know how to ride the center of the road on the cobbles, there’s no problem because there’s less chance of puncturing as all the big stones that puncture the tires are on the edges of the cobbles. There’s one who’s clearly understood and put the pressure on his rivals and that’s Froome. When you saw him contesting the sprint the first day with all the risks that entails, and you saw with (Mark) Cavendish he fell and injured his shoulder, that could have happened to him (Froome) too. He showed Alberto Contador, Alejandro Valverde and all his direct rivals that he knew how to fight for position (in a bunch). His team knew how to guide him to that point so already, psychologically, he scored some points on them (his rivals).”

Duclos-Lassalle said fear will be the big issue for those not used to battling for position on the run-in to cobblestone sections. Those who are more timid are likely to find themselves further away from the front of the peloton, increasing the risk of being caught behind a crash or split. Duclos-Lassalle says it’s vital to stay near the front. “There’s huge pressure because they have to be in the first 20 in each cobbles sector.” Another rider who knows well what it takes to ride cobbles is Switzerland’s Fabian Cancellara, a three-time winner of Paris-Roubaix. He says it will be interesting to see which of the overall challengers will cope best.

“With Froome, Alberto and Nibali we’ll see. Sure it’s going to be tough. Who’s better or not, I don’t know,” he said. “I saw Valverde riding a few Classics races in the spring and he did quite well in these races. But the other three riders, I don’t know, let’s see but it will be interesting I think.” Valverde won the Fleche-Wallonne race in April and also added top four finishes in the other two Ardennes Classics ? coming second at Liege-Bastogne-Liege and fourth at Amstel Gold – although none of those include cobbles. This stage is 100km shorter than Paris-Roubaix, which Cancellara believes will make a huge difference and mean the peloton heads much faster into the cobbles as the leaders jostle to stay at the front.

“It will go, in my opinion, full gas and that’s why also the first sector we go in will be big chaos,” he said. “That’s the biggest problem, that maybe the bunch goes not at 60 (kph) but 70 into the cobbles.” As for this year’s Paris-Roubaix winner, Dutchman Niki Terpstra, the cobbled sections are too short and too few to be compared to the ‘Hell of the North’ – the 2014 edition of the ‘Queen of the Classics’ had 28 cobbled sections covering 51.1km out of a total race distance of 257km. “In Paris-Roubaix we have 26 cobblestone sections and over here you have 8 half sections, so you can’t compare it – don’t expect it to be a Classic!”