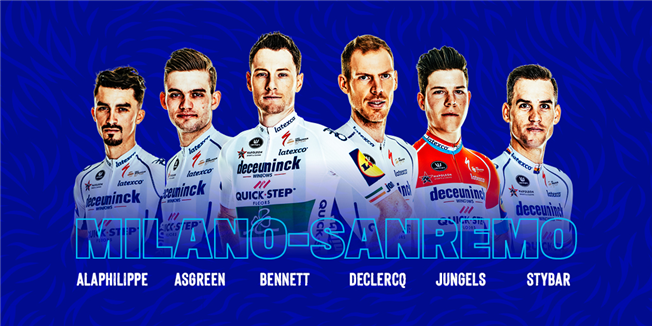 The revised 299km route could lead to a more demanding and aggressive race August 8, Saturday afternoon Milano-Sanremo has changed its parcours several times throughout the years since its inception, taking on new roads or adding new climbs to make things more exciting and give also the attackers a chance in a race that has seen the sprinters take the spotlight on countless occasions. This year, for its 111th edition, after leaving Milan, the peloton will head towards Lomellina and Alessandria, avoid Passo del Turchino and take on the Niella Belbo and the Colle di Nava instead, the latter being topped with just 70 kilometers to go.

From Imperia, the race – which won’t include the three Capi – will return to its original route to face the Cipressa (5.6km, 4.1%) and the Poggio (3.7km, 3.7%), where last year Julian Alaphilippe launched a stinging attack that made an important and decisive selection – a 10-man group from which he emerged victorious on the Via Roma. The defending champion is again at the start, accompanied by a very strong squad consisting of Kasper Asgreen, Irish Champion Sam Bennett, Tim Declercq, Luxembourg Champion Bob Jungels and Zdenek Stybar, a top 10 finisher at the race in 2014.

“It will be a different Milano-Sanremo, that’s for sure. The parcours is changed, it takes place in August when the temperatures are higher and we’ll race it in six, which will make the race difficult to control. This time, we won’t start as favorites, we saw since the restart of the season that many other riders are in good condition and should be in the mix in the business end of the race, but we are motivated to come out of it with a good result and for that we’ll give everything”, said Deceuninck – Quick-Step sports director Davide Bramati.