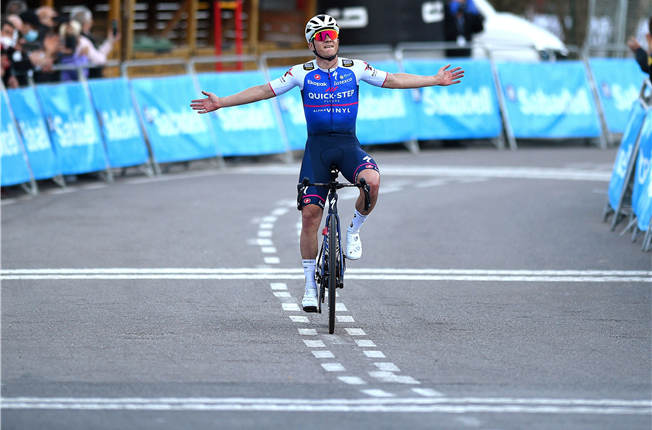 Remco Evenepoel needed only one race day to get his maiden victory of the season, and he did it in style, at the end of the hilly 166.7km stage between Les Alqueries and Torralba del Pinar. Comprising four classified climbs, the up-and-down route promised gaps between the general classification contenders and delivered them by the end of the day.

The Wolfpack took charge of the peloton midway through the stage, posting Josef Cerny at the front of the group, where the presence of the Czech ITT Champion was immediately felt, as the gap of the escapees began to drop long before the peloton tackled the penultimate ascent, where Yves Lampaert hit the fore. A strung-out bunch arrived at the bottom of the final hill and Mikkel Honoré soon took over the reins, bringing Evenepoel into position as the group was thinning out on the hard ramps of Torralba del Pinar.

Attacks began coming left and right on the 4.6km ascent, but Quick-Step Alpha Vinyl’s Belgian patiently waited for the steepest part to make his move, and once he got out of the saddle and opened a small gap on his opponents, he was never again seen until the finish. As he crested the climb, Remco had ten seconds in hand, an advantage he kept expanding on the downhill all the way to the line, where the 22-year-old celebrated his 23rd pro victory, one which put him at the top of the overall standings.

“It’s a nice way to start the season, and I’m happy I could repay the team for their hard work today. They were great, did an incredible job and deserve a big thank you! This win is good for the confidence and for the atmosphere as we begin our week here in Valenciana. We knew the finish was hard and the difference could be made only in the final kilometer, so I attacked there and never looked back. Getting the yellow jersey is a bonus, one that rounds out this perfect day”, a smiling Evenepoel said after nabbing the Wolfpack’s first win of the season and becoming the first Belgian in five years to lead Volta a la Comunitat Valenciana.