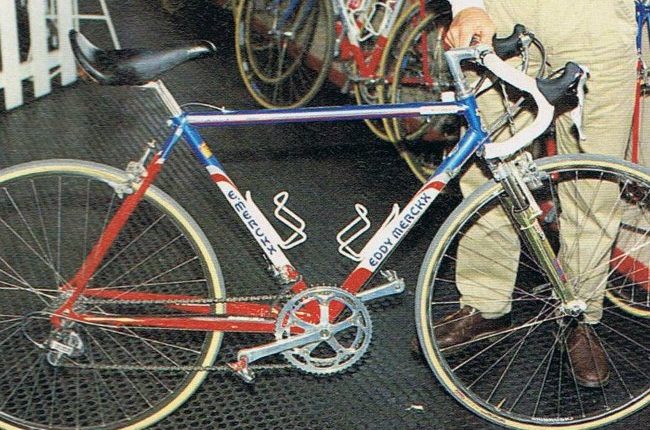 Ah yes, remember the days of old when, inspired by the introduction of mountain bike suspension, a new  train of thought on how to tackle the cobbles of Paris-Roubaix was born.

And probably none was as outlandish as the custom Eddy Merckx that was built for team Motorola rider Steve Bauer  that was just a few degrees off from a laidback recumbent position.  The Canadian star was a big, muscular rider and the thought was to put a different kind of muscle group to work for the Hell of The North.  As his Wiki page reads…”For his 1993 Paris-Roubaix campaign, he had a bike built by the Merckx factory with “an extreme rearward seat position” to test his theory that it would “engage the quadriceps more efficiently” and with it “more power to the pedals”. He failed to make the top ten (finishing over 4 minutes behind the winner in 23rd place and never rode the bike again.

Not much is known about the bike, or it’s whereabouts today, but there the following is taken from a page on RetroBike …

“Designed by Richard Dejonkheere (brother of Motorola mechanic Noel D. hence the team connection) basically just for the hell of it (!) it had a 60 degree seat angle and around 42/43” wheelbase. Bauer was out of a racing contract by this time but agreed to try it and got a special short contract with Motorola just to ride the bike. He trained on it for 5 months before the first race (Ghent Wevelgem) and in P-R it was fitted with a RockShox suspension fork  and 185mm cranks. He found it very stable on the rough roads but still only finished 21st, a reasonable ride but nothing to change peoples’ conception of what a ‘real’ bike should be like. “

With its slack seat tube, long top tube and short stem the bike was eerily prescient of what would one day become standard enduro mountain bike geometry.