First seen in 2015, the Repsol color theme has moved on 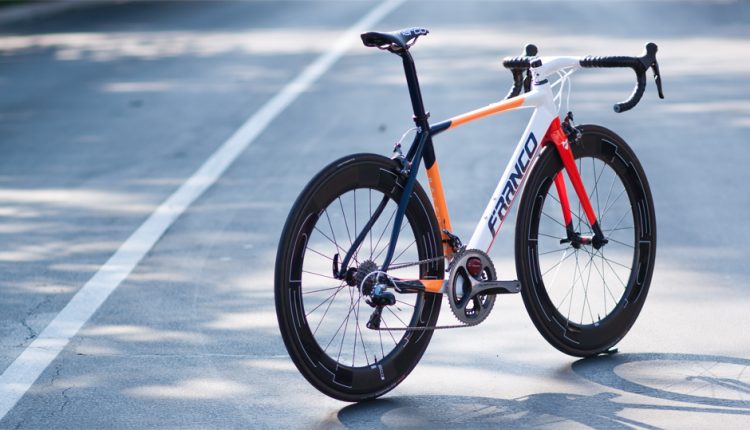 It was at the Sea Otter Classic back in 2015  when Franco Bikes first rolled out their Balcom S road bike that was slathered in a rich coat of Repsol tribute paint.

Two years later Franco once again used the Sea Otter to launch a new bike. This was the Latigo RS (that appeared in August 2017 issue) and with its bright red paint, SRAM Red drivetrain and minimalist Lightweight wheels, once again, a real head-turner.  Of course back then Franco was still  all-in on designing pure road geek bikes; light, stiff,  skinny tires,  with tight clusters and of course, caliper brakes. In fact, if we recall, that was at the same Sea Otter where one of their booth groms was wearing a shirt that said “Disc Brakes Suck”.

THE GRIMES HAS ARRIVED

Well, all that has changed.  Welcome to the new  Franco Grimes that’s highlighted by wide tires,  a wide ratio cluster, and, oh yeah, disc brakes. The Grimes is intended to reflect modern “all-road” technology which first & foremost means that its friendly to bigger tires – up to 38mm (10mm wider than what the wheels on the older Latigo would accept).