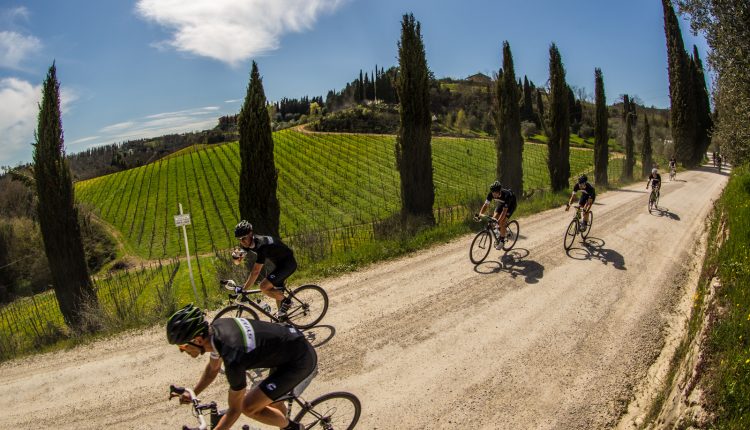 It was seven  years ago, back when bike brands used to throw-down for some crazy good bike launches, Cannondale went all out to launch their new Synapse. The event was held in Tuscany, Italy just outside the town of Sienna where the local “white roads” (aka strade bianche) would make up the crux of our rides.

Over the three day new bike feast, there was more drama than I had ever experienced at a bike launch.  On a  recent quest looking for some old bike racing images, I came across a selection of photos from the Italian launch that prompted the recollections that make up this week’s edition of TBT.

The first day of business took place on April 13, 2004. (Side note: If anyone has ever seen the movie “The Arrival” (starring Jeremey Renner, Amy Adams and Forrest Whittaker) there is a scene in the very beginning when Adams is teaching a language class when suddenly the class is interrupted by a string of cell phone calls and alerts with warnings of an alien invasion.) While no alien invasion had taken place, it was a tad surreal when suddenly so many phones began ringing away. It got strange quick.  Suddenly, someone yelled out, “there was a bombing in Boston”.

Although the “marathon bombing” had taken place 1000’s of miles from where we sat, for so many of the east coast based Cannondale employees, the news was local. Unfortunately, my daughter was going to school in Boston at the time. Damn, and as the kids would say, “the shite got real!” As expected, the Q&A session was  sidetracked until everyone back home was accounted for, but it was unnerving to say the least. For all the bike launches I’ve attended, it was the first time that the “real world” had so forcefully invaded our typically sanguine, special world existence. Little did we know at the time that this would only be the first of two traumatic events of the trip.

The other moment of the trip when “the shite got real” was when the combination of the slick dirt roads and our skinny, equally slick tires snuck up and got the best of our young American compatriot Kevin.  It was when the descending road (above) split into two directions with an old brick wall seperating the two that poor Kevin’s (until then) vacation-like Italian get-away came crashing to an end.

By the time I rolled-up, it was ugly. Kevin was splayed out unconscious on the road, blood was everywhere, and of course, not a scintilla of phone reception. After one of our local guides rode on to fetch help, I snapped a few photos of the incident (later given to Cannondale with the promise to not make public), before joining others for a somber ride back to the hotel. Everyone was shaken to the core, thinking about Kevin. Equally unnerving was  with the realization that it could’ve just as easily been anyone of us who got decked given the rambunctious nature of our descending. I ma reminded today of how  time and again on such trips, I have looked to fellow journo Jimmy Huang to appreciate how lucky we’ve been to be able to ride on so many foreign roads on so many foreign bikes and never get hurt.

BUT HEY, WHAT ABOUT THE BIKE?
By the time we collected for dinner word had gotten out that Kevin, while seriously injured, would be okay. Before dinner was served  Cannondale had already got his mom on a flight over where she would eventually stay with Kevin to recuperate for the next month.

So, what was worth talking about with the new Synapse?  Reviewing the story I wrote about it seven years ago in the July 2013 issue, it reads like an ancient, long-ago buried  time capsule.  Not to try and come across as some prescient future-teller, but how about this gem of a pull-quote…

“One thing that struck me at the Cannondale launch was that clearly an exciting new niche in the skinny-tire world has officially arrived. Forget Gran Fondos. With the growing popularity of skinny-tire gravel events and adventure races the need for more dirt-capable is now.”

The big talking points on the bike were the continuation of Cannondale’s proprietary use of their SAVE (Synapse Active Vibration Elimination) frame technology, which was now highlighted with their novel use of an undersized 25.4mm seastpost to bring added rear-end compliance. Of course when it came to the question (actually the answer) about the bike’s compliance, I still recall the cat and mouse game that was not dissimilar from my discussions with other bike brands on the same topic The following is what I wrote and best describes the moment…

“Given their frequent use of the words “deflection” and micro-suspension  – and once even “suspension” – in explaining the compliance features of the Synapse frame, I figured it reasonable to ask about just what the measureables of all that deflection were. Talk about hitting a brock wall. Despite additional rounds of Chianti Classico, Cannondale engineers weren’t too receptive to my inquiry on the topic. Wouldn’t,  couldn’t, shouldn’t there be any way to measure the much-ballyhooed   deflection in the frame just as they did with the new seatpost? Apparently not.

By this time a delicious chocolate mousse was delivered to the table  and I reiterated that my goal was just to be an irritant, but that as the market for compliant bikes matured, consumers would most likely want to hear some numbers attributed to frame movement, just as they do frame weights, rpm and gear inches.” 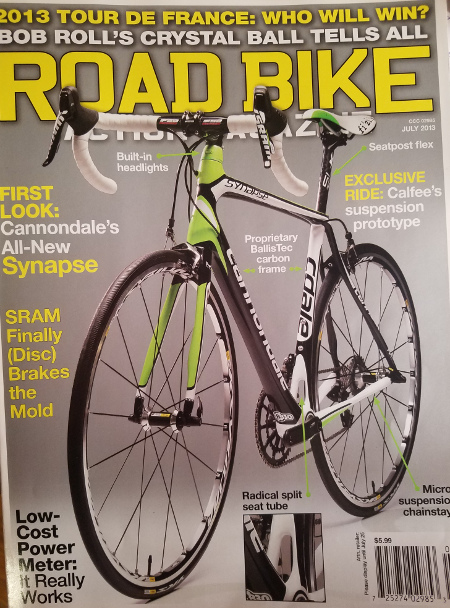 Ah yes, the July 2013 issue…seems just like yesterday! Other tech gems found inside was our first ride with SRAM’s all-new disc brake and Calfee’s  ground-breaking  Manta with (actual) rear suspension and Mavic getting closer to making a carbon clincher  with the introduction of their CC40 that used an aluminum “insert” that was wrapped with carbon. The times keep changin’…

Lauf Bicycles Direct To You