Milano-Sanremo, the first of the big five cycling monuments, is the next great challenge that awaits Tinkoff-Saxo and the professional peloton. For the favorites there’s no denying the Spring Classic that presents the possibility to enter the history books at the end of the 293km hilly parcours. Tinkoff-Saxo is at the start in Milan with a proven lineup led by former runner-up Peter Sagan.

Sagan’s form is on the ascendency after a week of racing at Tirreno-Adriatico and the team captain does not hide the fact that he has ambitions to do well on the way to San Remo.

“I’m heading to Milano-Sanremo to deliver a top result just like at any other race. When the team or I start a race, the ultimate goal is to win. But in cycling you never know and you have to be realistic. My competitors have the same goals and sometimes you win and sometimes you don’t. But Milano-Sanremo is special and I’ll naturally be at the start with big ambitions”, says Peter Sagan before elaborating:

“It’s difficult to point out a favorite. In the last three years, we haven’t seen the favorites taking the victory and instead it has been outsiders, who crossed the finish line first. It’s a special and unpredictable race due to many factors such as the length of the race and the tactical situations. All I can do is to try my best knowing that I’m backed by a strong and motivated team”.

“I believe that we enter the race with a strong and quite versatile squad, which is important if we want to have a saying in the different sections of the race. Overall, It’s crucial not to spend too much energy during this very long parcours, but I trust that we have a team in good shape ready for some very hard 293 kilometers”, adds Cenghialta 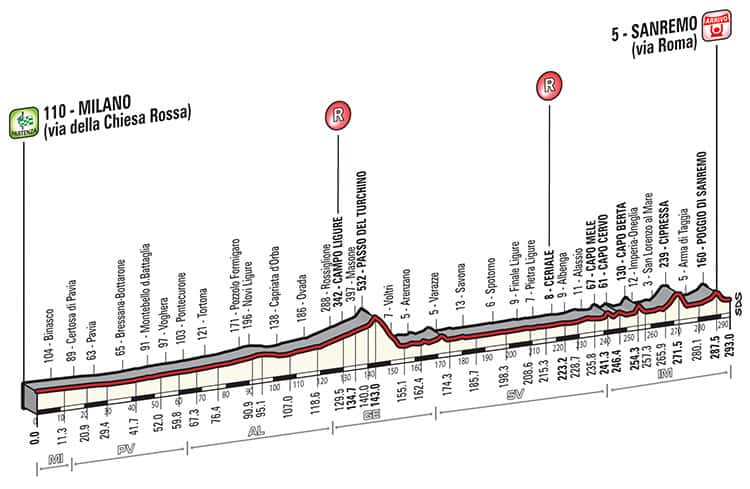 With its 293 kilometers of undulating and punishing racing, Milano-Sanremo demands perseverance combined with a punchy and sustained attack or a fast sprint from the final winner of the race. After leaving Milan and climbing the Passo del Turchino at km 143, the riders continue along the Tyrrhenian cost on the way to Sanremo, with the race entering its most crucial section some 27km from the home stretch. Here the riders will tackle the famous Cipressa and Poggio that, according to Cenghialta, serve as a takeoff ramp for any rider not looking to decide the race in a sprint.

“A key point is the Cipressa, where we will have to be in the front and handle the climb attentively – it’s here the first attacks take place. We have to be in control but without the necessity for us to intervene. We then have to be careful on the descent, where at times we see crashes. From there the race becomes quite fast, and then we hit the big finale with the Il Poggio climb, where we’ll also see attacks from any non-sprinters trying to create a selection”, explains Bruno Cenghialta, who adds that Milano-Sanremo can be lost in the blink of an eye despite being the longest race of the season.

“Being a big Classic, this race has to be approached with great caution. Despite its length, everything is at stake in a very short period and it’s very easy to make mistakes. There is a segment of 7-8km between Il Poggio, the descent and the finish, where the race is nearly always decided. The final stretch is extremely important and it will be crucial to correctly manage every single meter in order to set up Peter Sagan. It’s very easy to enter into tactical deadlocks in the final kilometers, especially if the group gets fragmented, so we will have to be very attentive with a strong team controlling the race”, finishes Bruno Cenghialta, who’ll be leading Milano-Sanremo from the team car together with team manager Bjarne Riis.